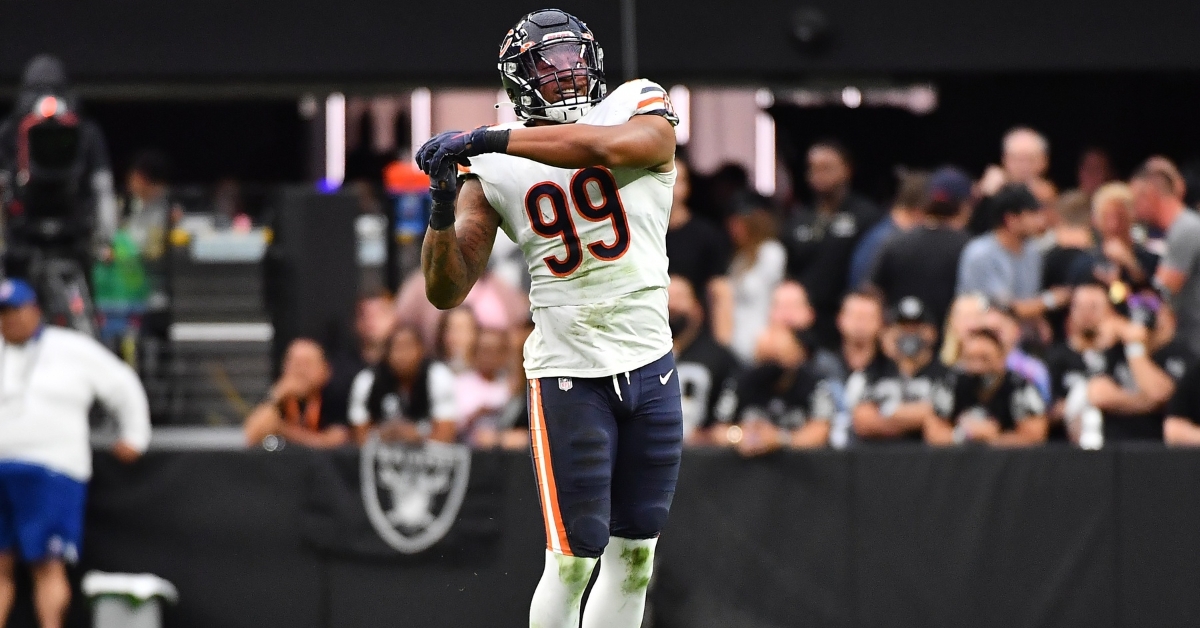 As we continue to preview our positions heading into training camp, we shift to the defensive side of the ball as the defensive line is up first. Immediately looking at the roster projection and you will notice a few things and some significant changes.

You will first notice the absence of Eddie Goldman and Akiem Hicks, who are no longer in the organization. Hicks ultimately signed with the Bucs, while Goldman was set to sign with Atlanta only to retire earlier this week. The second change you notice is that Matt Eberflus is changing the defensive scheme from a 3-4 to more of a standard 4-3.

With two ends and now two tackles, this is more of a traditional lineup which could go a long way for this team.

One of the players who will be playing a new position this season is the third-year pro Trevis Gipson, who is going from outside LB to defensive end with the change.

Although he hasn't played that position in a few years, Gipson played DE while attending Tulsa University, so it is more of a natural fit for him. A fifth-round pick in 2020, Gipson had a great season last year, starting all 16 games, including the final nine, as a starter filling in for Khalil Mack, who went down with an injury. During the season, Gipson registered 39 tackles with seven sacks, and the Bears are hoping that production can continue.

Another outside linebacker moving to defensive end this season will be Robert Quinn, who is coming off the greatest pass rushing season in Bears history. In his 12th year, Quinn had a career year where he registered a team record 18.5 sacks while continuously putting pressure on the QB.

Given the year he had last season, moving him to DE could have negative effects as it may take his ability to get to the QB away. Quinn may not even be on the team much longer as he continues to demand a trade, so it will be interesting to see how the Bears handle that situation.

Moving to the middle of the line where the defensive tackles will play, you have three guys expected to compete for the starting jobs, with two of them looking to build off strong 2021 showings. Angelo Blackson and Mario Edwards Jr are the projected starters, with Khyris Tonga in the mix.

Blackson will be in his second season with the Bears and played in 17 games with eight starts a season ago. While his 42 tackles were a good number for a defensive tackle, his 1.5 sacks will need to pick up with guys like Mack, Hicks, and Goldman gone.

Edwards is the guy who could be on the verge of a breakout season this year as he finished 2021 with six sacks and 25 tackles. With a more traditional front this season, he will be the primary Blitzer in the middle, with Blackson focussing on the run more. That is where Tonga comes into play, as he should be splitting reps with Blackson this season.

Justin Jones and others

Other guys who the Bears brought in this offseason and are capable of making this roster as starters or role players would be Justin Jones, Dominique Robinson, and AL-Quadin Muhammad. Of these guys, Jones and Muhammad have the best chance to start as they combined for 15.5 sacks the last two seasons, whereas Robinson is a rookie.

In this case, Muhammad is the name to watch as he played for Eberflus last season and knows the system. That gives him a considerable advantage, and it wouldn't shock me to see him starting next to Edwards when camp breaks.

While these eight are expected to see the bulk of the reps this season on the line, Sam Kamara, LaCale London, Auzoyah Alufohai, and Mike Pennel Jr are other options for Chicago to lean on. Ultimately it will be up to Eberflus to pick the right packages for his new scheme and for the players to adjust and thrive.

This team has seen their defense go from the best unit in football to the bottom third in just three seasons. Granted, this is not a top 10 unit by any means; it is vastly improved from a season ago, which is all you can ask for.