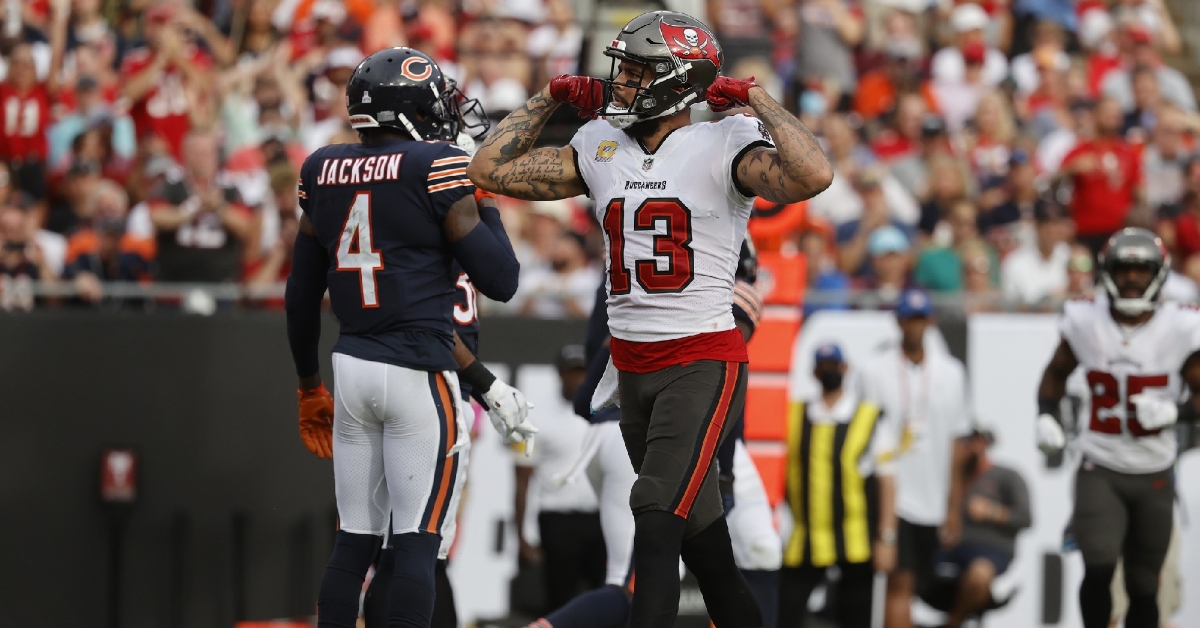 TAMPA BAY – Three weeks ago, Chicago Bears fans called for Andy Dalton's head and insisted that Justin Fields was the answer for this franchise. I wonder if those same fans are singing that same tune this week after another subpar performance by Fields against Tampa Bay.

Expected to struggle given he is a rookie, Fields hasn't done anything to ensure confidence in Bears fans as he continues to regress more so than improve from one week to the next. Whether it is a playcalling issue or an offensive line issue, something needs to change before Fields falls into the same problems Mitch Trubisky had when he was the starter.

Not only did Fields get hit early and often behind the line of scrimmage, but he threw a career-high three interceptions, which doesn't bode well for an offense struggling to score as it is. To make matters worse, Tom Brady torched the Bears secondary for four touchdown passes as the Buccaneers (6-1) move to 4-0 at home with a 38-3 beatdown of the Bears (3-4).

After upsetting the Buccaneers at home last season, Chicago was hoping to have the perfect game plan to derail Brady and his success yet again. Instead, Brady and the Buccaneers had the working game plan as the offense was on point early. With the Bears going three and out on their first possession, Tampa Bay returned the punt 43 yards landing at the Bears 32. Three plays later, Leonard Fournette put the Buccaneers up for good with a two-yard touchdown, with the Bucs leading 7-0.

Little did anyone know that touchdown would be the game-winning score as things only got worse for the Bears. As if two punts in as many possessions wasn't bad enough, Fields followed that up with his first of three interceptions on the afternoon setting the Buccaneers up with excellent field position again. Needing six plays to go 40 yards, Brady found Chris Godwin for touchdown pass 599 from four yards out, doubling the lead 14-0.

Looking to get something going offensively with Fields finding Khalil Herbert for a first down, the Bears offensive line continued to struggle with Fields not only taking a sack but also fumbling on the play, giving the ball right back Tampa bay with excellent field position once again. Give the Bears defense a ton of credit. Despite the offense handing the Buccaneers short fields, they made Tampa work for every bit of those yards.

They did that again by forcing Brady and company to use five plays to move the ball 35 yards, resulting in a nine-yard touchdown hookup from Brady to Mike Evans for the 21-0 lead. It was also another milestone of the many for Brady as that was career touchdown number 600 as the first quarter mercifully ended with the Buccaneers leading 21-0.

As the second quarter got underway, it was more of the same, with Jason Pierre-Paul getting to Fields once again as he put the ball on the turf for another fumble. This time, the Bears were able to dodge a bullet as Ryan Succop pushed a 43-yard field attempt wide right, keeping the score 21-0.

Looking to use that momentum shift to their advantage, Chicago put together their best drive of the game as they needed 10 plays to travel 57 yards.

Fields opened the drive by finding Darnell Mooney for 17 yards before Herbert moved the chains again for a 13-yard scamper. Herbert wasn't quite done moving the chains, picking up a second first down as he finished the day with 100 yards on 18 carries. Although the drive didn't end in six points, Cairo Santos ended the shutout bid connecting from 28 yards out to make things 21-3. That was as close as things would get as Tampa Bay touched the ball twice more before the end of the half, with both drives resulting in touchdowns.

The first was not only one of their longest drives of the night, going 75 yards, but showing off their quick-strike approach in the process needing just five plays to get it done. A few first downs on the ground set up the passing game where Brady found Godwin for 10 before going up top to Evans for 46. One play later, Evans finished what he started hauling in his second touchdown pass of the game from two yards out to extend the lead to 28-3.

In desperate need of some offense before the half, Fields and the offense moved the ball toward midfield after finding Allen Robinson for a nice first down. Chicago then dodged a bullet as a fumbled snap was recovered by Fields, but that was the beginning of the end as the Bears ultimately turned the ball over on downs giving the Buccaneers the ball with less than two minutes to go.

10 plays and 48 yards later, Brady found Evans for a third consecutive time as he found Evans from eight yards out to push the Tampa Bay lead to 35-3 at the half. Given how bad their first half was, things couldn't have possibly gotten worse in the second half. Wrong, as Fields and the offense continued to struggle, seemingly giving them no hope of a comeback.

Despite going 55 yards on their opening possession of the second half, Fields was intercepted a second time as his pass for Mooney inside the 20 came away empty. For the Bears, it was their defense making plays early in the second half by not only forcing a punt to open the second half, but giving the ball right back to their offense after Alec Ogletree forced a fumble and had DeAndre Houston-Carson recover it.

Two plays later, it was Fields looking for a big play to Robinson only to throw his third interception of the night and killing another momentum swing for the Bears. That interception resulted in the games final points, with Succop knocking one home from 22 yards to extend the lead to 38-3. Chicago saw their last two drives result in a punt and time expiring as they continue to be one of the most frustrating teams out there, falling to 3-4 with a 38-3 loss.

Fields was an efficient 22-32 in the game, but once again, his 184 yards and three interceptions are not going to get it done. Fields also added 38 yards on the ground to finish second on the team behind Herbert, who led the way with 100. After seldomly being used over the first six weeks, Cole Kmet finally made plays in the passing game, hauling in a team-high five catches for 43 yards and no scores.