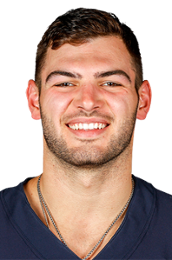 Selected in the second round of the 2020 NFL Draft (43rd overall) by the Bears; played in all 16 games as a rookie with nine starts

Started nine of 16 games in his rookie season; had 28 catches for 243 yards and two TDs on the season
Caught 20 passes over the final five games of the regular season after catching only eight passes over the first 11 games
Caught a season-high seven passes for 41 yards in Week 17 vs. the Packers
Made his first career catch in the Week 2 win vs. the Giants, a 12-yarder from Mitchell Trubisky
Hauled in his first touchdown catch in Week 6 at Carolina, a 9-yard pass from Nick Foles on Chicago's opening drive
Had two catches for 45 yards, including a season-long 38-yarder, in Week 7 at the Rams
Caught his second touchdown of the season in Week 13 vs. the Lions, an 11-yarder from Mitchell Trubisky; caught a career-high five passes for 37 yards in that game
Caught four passes for 41 yards (10.3 avg) in the Week 14 win over the Texans
Caught three passes for 16 yards in the Wild Card playoff game at the Saints