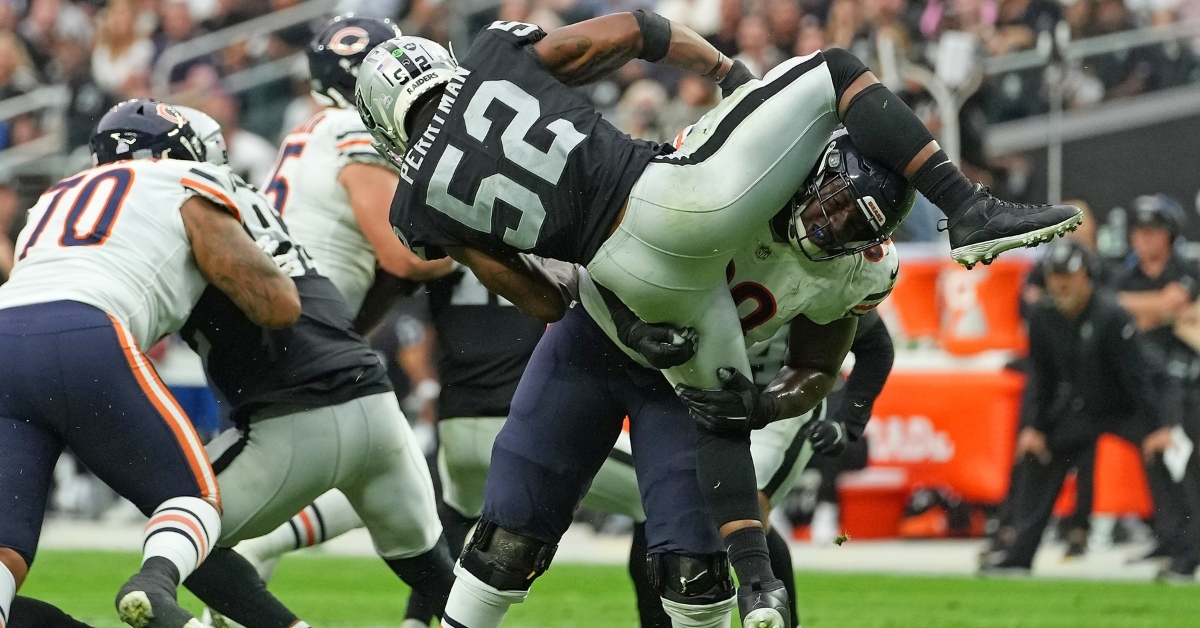 Daniels has been impressive in 2021 (Stephen Sylvanie - USA Today Sports)

When you look at the Bears offense, a few things come to mind. First, you look at a run-first team that needs to focus on running the football to set up the pass. Second, you have a rookie quarterback who is only getting better with each passing week, although extremely inexperienced.

Finally, you look at an offensive line that continues to struggle weekly, but has gotten better with more reps. Take away that Cleveland game where the Bears offensive line got destroyed, and this unit has performed well above where many people expected them to.

A big reason for that has been the improvement in the running game, which all stems from offensive guard James Daniels. We have seen Justin Fields unleash his cannon of an arm, but he hasn't done that enough to this point. This team still relies on their run game, and Bill Lazor knows that.

Even with leading rusher David Montgomery sidelined a few more weeks, the duo of Damien Williams and Khalil Herbert did just fine on Sunday as they look to be the next great duo for the time being. Should the Bears want to continue to run the football the way, they have so far this season, running behind Daniels may not be a bad idea.

For all the slack that the Bears offensive line has taken this season, Daniels isn't getting talked about a ton to this point. However, he should be as pro football focus has ranked him the best run-blocking guard in the NFL thus far. Take what you want away from that, but the bottom line is, Daniels is playing at a high level and paving the roads in the process.

Man James Daniels had a GAME. Body slam aside he was just solid the entire game. Consistently getting to the second level. Real strong hands/core against the pass rush. I know Vegas IDL is cheeks but its encouraging. Herbert will learn patience to set these up better. V decisive. pic.twitter.com/sdB910qpvP

For those unfamiliar with how run blocking is graded, ESPN uses Run Block Win Rate or RBWR to track the number of times the line won their respective run blocking plays against the defense. Not only is Daniels winning his blocks, but he is doing so at an impressive clip, winning 83% of all run blocking attempts so far.

To put that into perspective, that means that out of every 10 running plays, Daniels is moving his opponent out of the way eight to nine of those plays, which allows for the Bears rushing attack to get going. Considering how much this offensive line has struggled in the past, seeing something like this has to be a pleasant surprise for Bears fans.

Advanced metrics are often tricky to understand, and fans tend to ignore them for that reason. However, watching the Bears running game this season and the grade Daniels is receiving so far is very accurate. When you watch the Bears offense, more often than not, the running game tries to run on Daniels side, knowing the success he has had.

They may not get tons of yards every time, but they are far more consistent when it comes to running to his side. Daniels has been no stranger at being a good run blocker, but this season is a whole new level for him. Not only does he lead the NFL in run blocking grade, but he is beating out lots of elite guards in this league, so it isn't as if he isn't facing stiff competition.

Daniels hasn't always been the player he is now, and that is a credit to his work ethic and the scouting staff and front office for believing in him and giving him a chance. The coaches for the Bears played a significant role in his development as a player, so to see him playing at this level has to feel good for all involved.

Finally, a big reason for the increase in play falls on Daniels himself, who missed most of 2020 with a pectoral injury. Not only did he have to work to recover from that, but he has put in a ton of work to become a great guard.

There hasn't been much to love about the Bears offensive line in recent seasons, but the emergence of Daniels is one of those things. His play alone has helped this unit improve as a hole which has helped lead to more wins on the field.