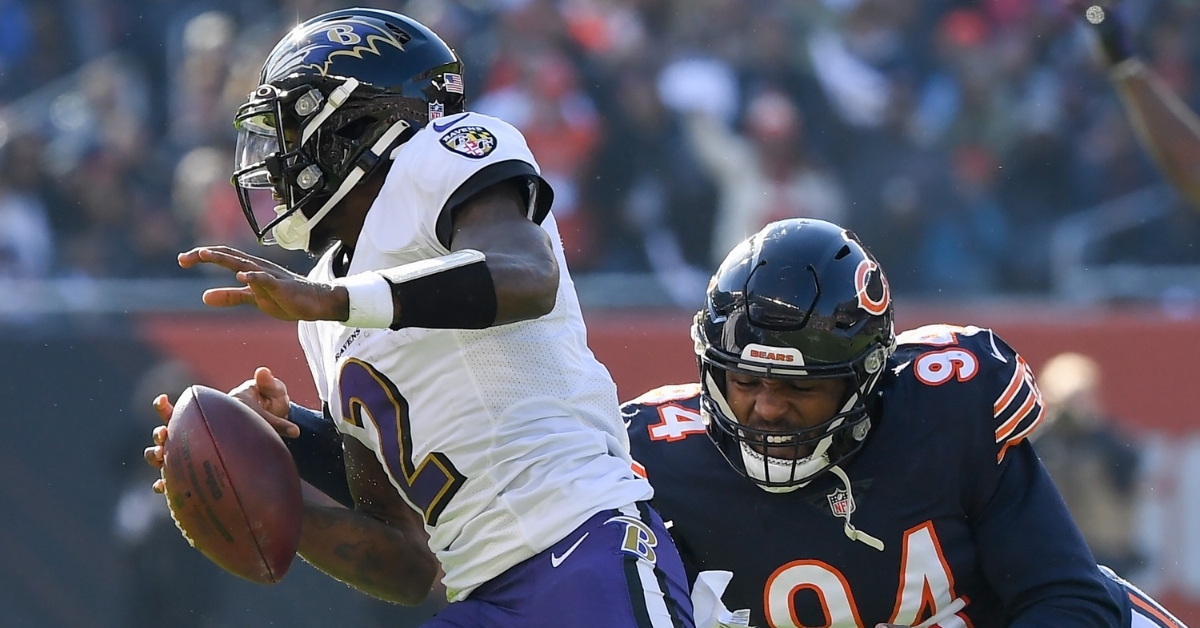 CHICAGO – Coming off their bye week, the Chicago Bears (3-7) returned to the field Sunday with a golden opportunity to finish the season strong. For that to happen, a win against AFC North Leading Baltimore Ravens (7-3) could go a long way to jumpstart how the second half of the season goes.

The Bears were given a bit of a gift before the game when Lamar Jackson was ruled out due to a NON-COVID illness. That meant that Tyler Huntley would be making his first NFL start on the road against Chicago. Expecting a defensive struggle with Jackson out of the equation, that is precisely what fans

received as this game was played within six points throughout.

As if a scoreless first half wasn't bad enough, Justin Fields suffered a rib injury during the third quarter and was unable to return to the game, leaving things to Andy Dalton the rest of the way. Dalton played well, completing 11-22 passes for 201 yards and a pair of scores as the Bears found a way to grab the lead. Unfortunately, the Ravens had the last laugh as Devonte Freeman plowed in from three yards out with less than 30 seconds to go as the Bears suffered their fifth straight loss 16-13.

Neither team could get much of anything going in the first quarter, although the Bears came the closest. With running the football hard to come by, Fields took the top off the defense hooking up with Darnell Mooney for 29 yards to move the ball to the Ravens 34. A few plays later, Cairo Santos was on to try a 40-yard field goal only to miss the kick wide left as he has now missed his last two field goal attempts after making 40-straight. That miss would prove costly later.

The rest of the first quarter was filled with minimal action and three punts before the Bears offense started to get things going again in the second. David Montgomery began to get things going on the ground before Marquise Goodwin hauled in a 22-yard strike from Fields for the big play. Facing a second down, Fields was pressured and brought down for the sack, fumbling on the play as the Ravens recovered.

That fumble led to the game's first score, with Justin Tucker knocking home a 35-yard try to put the Ravens up 3-0. Tucker would add a 27 yarder late in the second quarter as the Bears headed into the locker room trailing 6-0. Despite trailing, the Bears had to like where they were sitting as they started the second half with the ball.

A 22-yard strike from Fields to Mooney set things up nicely, but Fields was lost for the game a few plays later after being tackled on a scrambling attempt. Enter Dalton, who was making his first appearance since week 2. It was well worth the wait for him as he came out guns a blazing giving the Bears a 7-6 lead. Needing just two plays to go 83 yards, Dalton found Jimmy Graham for 23 before finding Mooney for the 60-yard score to give the Bears their first lead.

Dalton appeared to be the spark the is offense needed as they were moving the ball better than they have at any point in recent weeks. Even after punting the ball several times, the Bears defense came up huge intercepting Huntley to keep the Ravens offense in check. However, a terrible 28-yard punt from Pat O'Donnell gave the Ravens excellent field position and one where Tucker capitalized with a 46- yard field goal to give the Ravens a 9-7 lead with less than five minutes to go in the game.

Usually, this would spell the end for the Bears, but not for Dalton and company, as the offense was ready to go again.

In just two minutes, the Bears not only scored a touchdown but went 75 yards on 10 plays to do so, looking like a well-oiled machine in the process. Cole Kmet got involved early, as did Montgomery, as he has significant in both the running game and passing game. Facing a 4th and six, a costly false start moved the ball back, but the Bears still elected to go for it. That worked out in their favor, with Dalton finding Goodwin for 49 yards for his second TD pass of the half, putting the Bears back in front 13-9 with less than two minutes to go.

Huntley needed a touchdown to win and wasted no time taking a shot for Rashad Bateman as a pass interference call moved the ball 21 yards down the field. One play later, it was Huntley again, this time finding Devin Duvernay for 21 yards as the ball was down to the Bears 30. Facing a third and long with the game on the line, Huntley delivered another big blow finding Sammy Watkins for 29 yards to push the ball inside the five. One play later, Freeman finished things off with a three-yard burst to put the Ravens up 16-13 as they would win by that score.

Huntley completed 26 of his 36 passes for 219 yards in his first career start with no touchdowns and one interception. Mark Andrews hauled in eight passes for 73 yards while Freeman led the way with 49 yards on the ground to go with his one score. Fields got off to a rough start before his injury, going 4-11 for 79 yards while adding 23 yards on the ground. Mooney continued to do his thing leading the way with 121 yards, while Goodwin chipped in with his best performance of the season, adding 104 yards of his own.