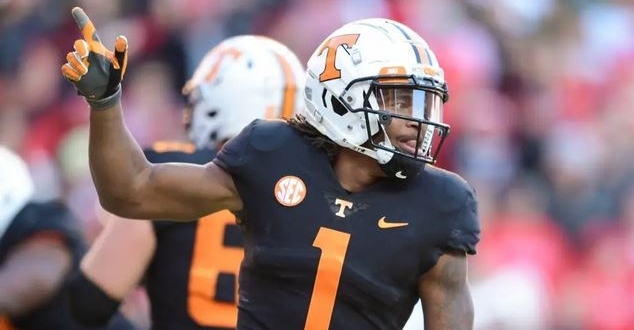 Jones is a speedster added to the Bears WR room (Photo: Usat / USATODAY)

When the 2022 NFL draft began, the Bears had three glaring needs to address. They addressed one of those needs, X2, in the second round by adding a pair of first-round caliber DBs. Even at that, there were still other needs that needed to be filled, with WR the biggest one to this point.

Considering how much depth was in the WR class, people expected plenty of talented WRs to be left on day three and thought the Bears would make a run for one in the second round. It took three rounds, but the Bears did address their need at the WR position by taking Velus Jones with the seventh pick in the third round.

The former Tennessee Volunteer is known for his special team and return skills, but at 6-0 and 204 pounds, Jones brings a lot to the table in the passing game. For starters, he is a burner which the Bears needed running a 4.31 40-yard time. Chicago needed more speed, so adding Jones into the mix fits what they wanted to do.

Once a USC product, Jones transferred from Southern California and latched on with the Volunteers for the 2020 season. In six games that season, Jones hauled in 22 catches for 280 yards to go with three touchdowns. He also added nearly 400 yards in kick return yardage while taking one to the house.

Fast forward to last season, and his receiving numbers significantly increased as he became a much more trusted part of the Volunteers offense. Jones brought in 62 receptions for the season for 807 yards and seven scores. With that, he earned SEC special teams player of the year accumulating more than 600 yards in kick return yardage and one score while adding another 300 yards in punt return yardage.

Initially looked at as a fourth or fifth-round product comparable to Devin Duvernay, the Bears may have reached a little bit for him, but his speed and special team's ability had something to do with that. While special teams will always be his specialty, Jones does have the size to make him an asset in the passing game.

Not the most productive receiver in college, Jones started to show some great flashes last season, which is promising when you look at this season. Although not a sound route runner, Jones is a playmaker with the ball in his hands and is fearless when that happens. He has a chance to break a big game whenever he touches the ball, and the Bears are hoping that continues at the NFL level.

Getting back to the passing game, Jones can either lineup on the outside or move to the slot to best maximize his speed. Although he is not a great route runner right now, his route running improved immensely last season, which is a good thing moving forward. Not only does he know how to finish the catch, but he is excellent when it comes to YAC, as he often breaks several tackles to make a play. Should his tremendous play on Special TEams continue, the Bears are looking at a potential game-changer similar to Cordarrelle Patterson.

For as much good that brings with him in the special teams side of things, he was projected as a fourth or fifth-rounder for a reason. Jones was in college for six years, making him a 25-year-old rookie. How much can you get out of him, and for how many years is a big question to go with that age?

Despite improving his route running abilities, he doesn't do a great job going hard into his routes and often goes 75-80%. Add that to a small wingspan and catch radius, making for a tight window for Justin Fields to throw into. He was also only asked to give Tennessee and USC basic routes, so there are a ton of questions as to whether he can run a complex route or not.

This may have been a reach for Chicago, but Jones is a likable teammate that will give you 100% effort when asked. He plays hard when given a chance, and due to his special teams skills alone, that gives him a leg up on some of the other roster bubble players.