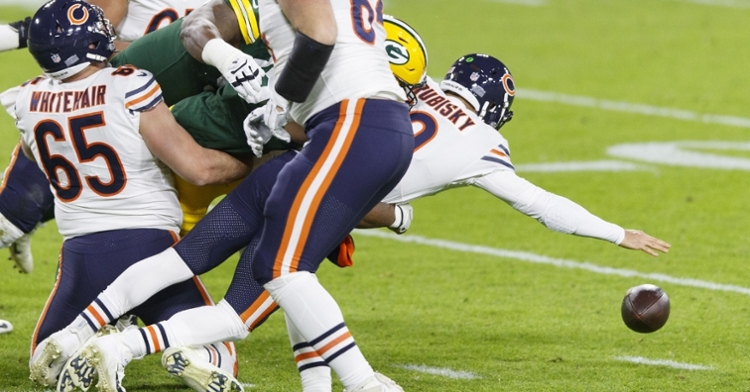 It was another disappointing week for the Chicago Bears, and frankly, an embarrassing one. Another week, another loss, this time in primetime. The Bears had a chance to gain some ground in the NFC and lost their fifth in a row.

Let’s give out our usual position grades for the Bears defeated by Aaron Rodgers and the Packers in a 41-25 loss.

Nick Foles was injured and likely rightfully benched either way in this game in favor of Mitch Trubisky. Trubisky did not take a snap all game where the Bears were tied, let alone leading — so a lot was asked of him immediately. He made some good decisions and some bad, including two interceptions and a fumble that the Packers were able to capitalize on. However, the offense did move the ball better than usual. Trubisky finished with 242 yards, three touchdowns, and two picks on the day.

Chicago Bears QB Mitch Trubisky took blame for the turnovers and how the offense played.

Said he was grateful to be out there and play the game, but "obviously it went bad for us."

This unit performed admirably enough to earn a C-.. The blame might not be placed on this unit, but the production wasn’t quite there. Allen Robinson had a solid game with eight catches for 74 yards and two touchdowns. Rookie Darnell Mooney caught three passes for 34 yards and ran some good routes. Anthony Miller continued to be involved with three catches for 28 yards but had a drop. Riley Ridley was also involved on Sunday night. This unit should have been solid, but they have a lot of room to grow.

Too many people on here said some silly things last night about Allen Robinson not making contested catches.

So I made a supercut of Allen Robinson being ridiculous.

This unit, with an overfilled position room, had a quiet day on Sunday. Rookie Cole Kmet had three targets but dropped a touchdown and only hauled in one catch, and Jimmy Graham had just three catches for 32 yards.

Kmet also ran more routes than Graham for the first time this season (32 to 15).

Changing of the guard.

The offensive line was bad once again, allowing three sacks. Some injuries mixed with a bad effort show this unit is the Bears’ weakest one, but this wasn’t their weakest game.

The D-line was bad on Sunday. The unit could not pressure Aaron Rodgers enough to get a QB hit on him, let alone a sack. There was also no push in the run game as the line was gashed for positive yards each time.

Per @NextGenStats, Khalil Mack had zero pressures against the Packers. That’s the second time in the last three games Mack did not have a pressure.

The Packers had so many big plays. Eddie Jackson was getting burned in the deep passing game, and Buster Skrine seemed to be a target of the Greenbay Offense. All game long, the Bears secondary needed to make a play or at least prevent Green Bay from making one, and they couldn’t.

The #Bears’ secondary currently ranks third in the league at defending against opposing wide receivers, per ESPN.

Kyle Fuller and Eddie Jackson have both been playing All-Pro level football this season, and I think they’ll get those honors in a few weeks. pic.twitter.com/jKNHloQBbX

Cairo Santos was 1-1 on field goals and made two extra points, nothing spectacular. The return game was kept in check, with Patterson returning just two kicks for 41 yards and the rest going out of the end zone or away from him.

There were absolutely issues with the play calling, but it was so bad that the blame is hard to place on both sides of the ball. The offense had moments where it clicked and some occasions where they did not look like one cohesive unit.

Bears coach Matt Nagy is understandably agitated after last night’s loss. Says everyone in the building needs to wake up and have some personal pride to turn it around.

Nonetheless, this team is now 5-6 and looking to make it 6-6 and snap their losing streak this week at home against the Detroit Lions.