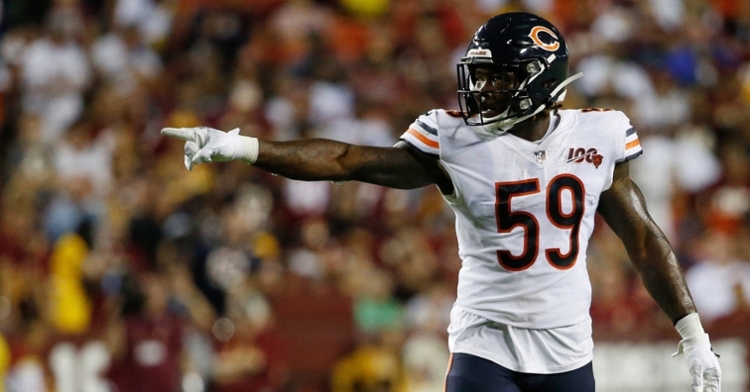 CHICAGO — When Tuesday's final roster cuts were announced, it was revealed that the Chicago Bears made the somewhat surprising decision to hang onto seven inside linebackers while going with just five wide receivers on the 53-man roster. However, those numbers quickly changed, as the Bears placed inside linebacker Danny Trevathan on short-term injured reserve on Wednesday and subsequently signed free agent wide receiver Breshad Perriman to a one-year contract.

Perriman was a first-round pick of the Baltimore Ravens in 2015 but has never quite lived up to the hype in the NFL. He was released by the Detroit Lions on Monday, and the Bears scooped him up a few days later. In the wake of releasing wideouts Riley Ridley and Javon Wims, the Bears added Perriman to the mix. He started 12 games for the New York Jets last year, hauling in 30 receptions for 505 yards and three touchdowns.

Bears are signing former Lions’ WR Breshad Perriman to a one-year deal, per his agent @DrewJRosenhaus.

As for Trevathan, he dealt with a knee injury throughout training camp, and it is assumed that the nagging ailment led to him being placed on the IR. The veteran has been a fixture of the Bears' defense since coming to Chicago in 2016, but he will be forced to miss at least the first three games of the regular season. Trevathan intercepted a pass in the Bears' preseason finale on Saturday. While he is out of action, recent addition Alec Ogletree will start at right inside linebacker.

Look for Alec Ogletree to be the starter alongside Roquan Smith for the Week 1 game against the #Rams, the team that originally made Ogletree a 1st round draft pick.

In other Bears-related roster news, cornerback Artie Burns, who was cut by the Bears on Tuesday, cleared waivers and was re-signed by the Bears on Wednesday. Burns joined the Bears in 2020 but suffered a torn ACL last August before ever getting a chance to suit up for the Monsters of the Midway. He inked a one-year deal to return to the Bears earlier this year.

Bears also are signing cornerback Artie Burns to their active roster, per @DrewJRosenhaus.

The Bears also claimed wide receiver and return specialist Nsimba Webster, who was released by the San Francisco 49ers on Tuesday, off waivers. Webster may handle return duties while running back Tarik Cohen continues to recover from offseason surgery.

#Bears have claimed WR Nsimba Webster off waivers from the #49ers

On top of announcing their practice squad roster on Wednesday afternoon, the Bears placed rookie offensive tackle Teven Jenkins, who is currently recuperating from a recent back surgery, on injured reserve and re-signed free safety Marqui Christian after releasing him on Tuesday. Wide receiver Rodney Adams was arguably the Bears' most impactful wideout in the preseason, but he was waived. However, Adams is likely to be signed to the Bears' practice squad if he clears waivers.

That leaves 2 spots on the practice squad. Figure there is a god chance one is earmarked for WR Rodney Adams.

UPDATE: Adams cleared waivers and was added to the Bears' practice squad on Thursday.

#Bears roster move:
We have signed WR Rodney Adams to the practice squad.