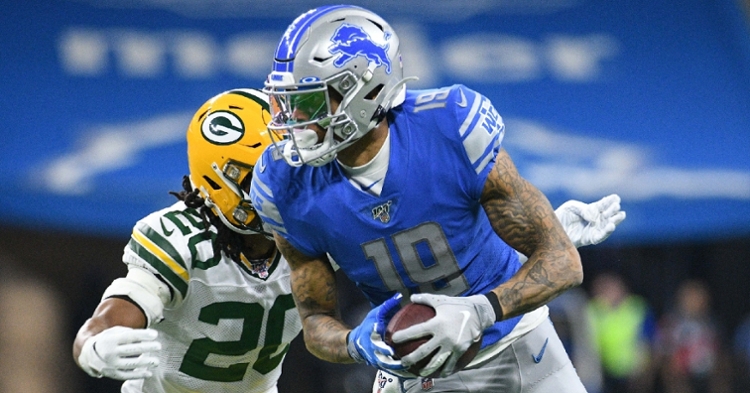 It seems like we have gotten to the point where it is Russell Wilson or bust for the Chicago Bears. According to some reports that have surfaced yesterday, the Bears are willing to give the Seahawks an impressive offer that would send Anthony Miller, Akiem Hicks, and a slew of picks Seattle's way. Until that happens, if it happens, it is a storyline that will be watched as typically things begin to pick up now.

While the trade market has been buzzing for weeks, NFL free agency should take center stage soon as the NFL new Year is set to begin. With that comes a lot of intriguing options for Chicago should they make the funds work. With a nearly 9% decrease in the Salary Cap, the money will be tight for Chicago this season, and they will have to get very creative.

When looking at the free-agent list, I became quite intrigued with some of the offensive names as they could all help Chicago. A trio of those names hail from the NFC North. If the Bears can't beat some of those teams, why not take some of their ammo.

Guys like Kenny Golladay, Aaron Jones, and Cory Lindsey are all available for the taking, and all would be an upgrade for Chicago.

Kenny Golladay: Chicago fans received some good news earlier this week when Allen Robinson was given the franchise tag to remain in Chicago. That doesn't mean he will, though, as Chicago will still have the option to trade him later should they need to free up more cap space. Should that happen, the Bears will need a new No. 1 receiver, and Kenny Golladay would be a great fit.

The now fifth-year pro is coming off an injury-riddled season that limited him to just five games. However, he produced in those five games racking up 338 yards receiving to go with two scores. Before this season, Golladay was an excellent addition for Detroit and gave them their first legitimate No. 1 receiver since Calvin Johnson.

Across the 2018 and 2019 seasons, Golladay hauled in 135 catches for 2253 yards and 16. That followed up a rookie season in which he had 477 yards and three scores, so you can see how much he improved. Robinson is about as sure-handed as they come, but I have a hard time believing he will be around long-term. That is why Golladay makes sense.

He is a No. 1 receiver in his own right and is just starting to come into his own. How nice would it be to have a young quarterback paired with him for years to come. Going back to the Wilson trade where Miller was listed to head to Seattle. That would create an opening at WR. Golladay could fill that opening, and if paired with Robinson, it could be a lethal combo.

Cory Lindsley: Starting with Lindsey, the 6-3 301-pound center is coming off an incredible 2020 in which he was part of an impressive Green Bay Packers offensive line. Lindsey was graded as the top center in the NFL this past season. Yet, for some reason, the Packers have decided to let him test the free-agent market.

Since entering the league in 2014, Lindsey has played 13 games or more in all but one season. Three of that season saw him not only start all 16 games but play every snap on the offensive end. Lindsey is also someone who doesn't make mistakes, as he has accumulated 10 penalties over his career. Not to mention he is a great blocker who doesn't allow too many sacks, and Chicago would be lucky to have him.

Lindsey would immediately make the Bears offensive line better but deeper as it would allow other guys to move around. Considering the Packers are tight on cap space, it is hard to imagine the Bears being able to afford him, but if possible, they should look to add him one way or another.

Aaron Jones: The least likely option of the three would be Aaron Jones as he is about to get paid. Man, would it be nice to have him in Chicago? Before the start of last season, the Bears and Tarik Cohen agreed to a contract extension that will keep him here for another three seasons. He then went on to tear his ACL in week three, and that was that.

While Cohen and Jones are one in the same in terms of players, Jones is miles better than Cohen, and he could make this offense tick if paired with Cohen. David Montgomery is the Bears No. 1 back, and coming off the season he had, he showed everyone why. However, if the Bears are serious in going after Wilson or Deshaun Watson, I find it difficult to believe that one of those teams won't ask for Montgomery.

Both Houston and Seattle are in a tough spot regarding running backs, with both Chris Carson and David Johnson appearing not to be the answer. IF they are to part with their franchise QB's, they would want Montgomery in return to at least establish a running game. That would leave Chicago with Cohen as their starter, and as good as he can be, he isn't a starter.

Now, Cohen paired with Jones would be fun. Jones is the definition of a complete back contributing both in the rushing and passing game. After barely rushing for 1000 yards and 12 scores his first two seasons, Jones has responded with consecutive 1000-yard seasons, including a 16-touchdown effort in 2019. Add in nearly 1100 yards receiving with 800 coming the past two seasons, and you see how valuable he is.

Having both Jones and Cohen in the backfield would be a nightmare for anyone. Not only would you have two running backs, but two pass-catching backs, so the possibilities would be endless. Defensive coordinators would need to plan extra hard trying to figure out what the Bears would run. As I mentioned above, giving the finances and what not all these moves would be hard to get done, but Chicago should try if possible.