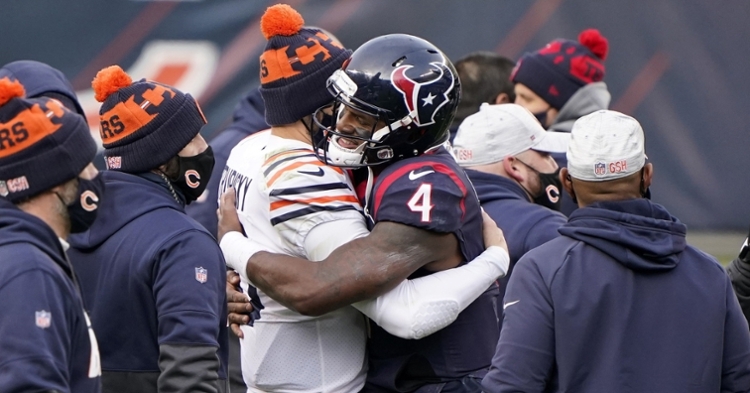 Not only did the Bears put an end to their six-game skid yesterday, but they did so in dominating fashion, manhandling the Texans 36-7. The complete-game effort was what fans have been waiting to see all season. That was by far the best game of the year for this team.

Before we get our hopes up too much, keep in mind Houston is not the team they once were to begin the season, at least weapons wise. They are without two of their four top receivers, and their offensive line may be even worse than the Bears. Chicago needed this win so desperately not only to keep their playoff hopes alive but to restore some confidence in that locker room. They did both, and now let's see if this carries over the rest of the season.

With three weeks left in the regular season, the Bears' playoff hopes, although slim, are still very much alive thanks to this win.

Here are some takeaways from the game on Sunday.

Finally, Chicago beats Houston: It only took 18 years, but the Chicago Bears finally beat the Houston Texans. Since coming into the league in 2002, the Texans hadn't lost to the Chicago Bears. Granted, the teams only meet once every four seasons, but that 4-0 record is still 16 years without wins, but 18 if you count the year they came into the league.

If you're going to get your first win, why not do it in dominating fashion as the Bears physically manhandled the Texans. There was a lot of talk about Deshaun Watson and how he may use it as a revenge game on the Bears for not drafting him. Instead, Mitch Trubisky was the star playing one of his best overall games as a starter in his career.

Trubisky outplayed Watson in every facet, and a lot of that had to do with playcalling. Yes, you heard that right, as the one thing the Bears have been criticized for all-season was playcalling. For once, the offense was catered to Trubisky's strengths and had him continually moving in the pocket. That is precisely what this team needs to do for Trubisky to play at the level they expect.

Mitch Trubisky was smiling under his mask after the @ChicagoBears beat the Texans. (@Melanie_Collins) pic.twitter.com/nvHkkDGKZR

Playoff hopes still alive: Entering the game on Sunday, Chicago needs to treat every game as a must-win elimination game. Essentially the Bears' playoff hopes are slim as they need to win out to have a shot at the postseason. Before the Texans game, the Bears had less than a 13% chance to make the postseason. After their win, that percentage increased to 28%, but there is still much more work to do.

Chicago mathematically still has an opportunity to make the postseason, but the last three weeks will tell us a lot about this team. They are currently the ninth seed in the NFC and trail both Arizona and Minnesota for the final spot. Minnesota did beat Chicago earlier this season, so unless the Bears can find a way to knock off the Vikings next week, they will be eliminated by week 16.

Minnesota still has New Orleans to play after Chicago with the Bears having Green Bay left on their schedule, so week 15 is an all or nothing type game for each team. The one team that Chicago needs to be concerned about is the Arizona Cardinals, who leapfrogged Minnesota to take over the seven seed.

Arizona not only has the easiest remaining schedule of teams in the postseason hunt but have a 72% chance to get in as things sit right now. Both are great odds for them and not so much for the Bears. Hopefully, this win is what the Bears needed to realize their season is far from over.

Contributions a plenty: When you win a game 36-7, it is easy to pick out players of the game. However, that wasn't the case with the Bears as they got contributions in all three phases. Offensively, Trubisky shined with his three touchdowns, while both Allen Robinson and Darnell Mooney showcased their stuff in the receiving game.

The Bears win for the first time since October 18th!

Allen Robinson had 9 catches for 123 yards and a touchdown.

Roquan Smith with 12 tackles and 2 sacks.

Defensively, the Bears were all over the Texans, forcing two turnovers to go with a Khalil Mack safety. The Bears running game was alive and well, with David Montgomery ripping off one of the longest runs of the NFL season en route to a 100-yard day. Add in the strong showing from Cairo Santos once again, and the Bears showed their full arsenal.

All season long, fans knew this team had the talent to beat anyone but just had trouble putting it together consistently after their hot start. Hopefully, it isn't too little too late because the Bears team fans saw yesterday is a team that can beat anyone in the NFC.