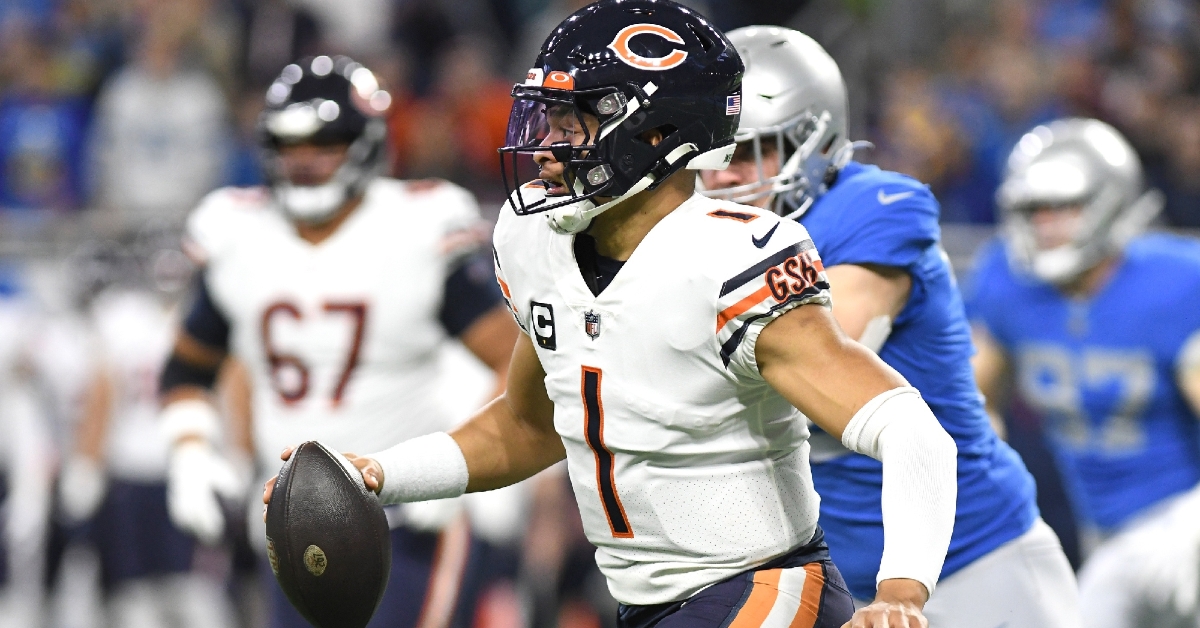 Two years ago, the Bears season would have ended on Sunday with the team posting a 3-13 record. That is no longer the case, as there is an 18-week NFL season which means the Bears have one more game to get through before their season can end.

With a chance to play spoiler on Sunday and end the Lions playoff chances, the Bears got off to a fast start that saw them hold a 10-7 lead after the first quarter. That was until the Lions ripped off 34 unanswered points to end the game and handed the Bears their ninth consecutive loss of the season. That is not what any fan wanted to see this season, but at least there is some potential hope for the future.

Even with the loss, you saw some more positive play from Justin Fields on the ground, but that was about it, as the passing game was atrocious at best. That may be putting it lightly, as the Bears had just 75 yards passing against a Lions team prone to give up the big play through the air.

The Lions are a scary team

Say what you want about the history of the Lions and where they have been since the early 2000s. This is not the same Lions team everyone has become accustomed to, and Dan Campbell is a big reason for that.

Ever since the second-year head coach arrived in Detroit and immediately wanted to change the culture of this organization. He changed that culture last year, and although the team didn't win many games, they loved playing for him and often fought hard until the end.

Fast forward to this season, and the Lions got off to a 1-6 start, which had a lot of people calling for Campbell's job. Instead, he responds by winning seven of the next nine games to put his team at 8-8 and in position to secure the final playoff spot in the NFC. To do that, they need to beat the Packers on Sunday, but to be in this position is a credit to how much more improved this organization is.

Sit everyone next week

I give Matt Eberflus credit for wanting to stick with his starters the rest of the way, but what are you playing for at this point? You currently own the No. 2 pick of the NFL draft, and if you upset the Vikings next week, you may fall to the No. 3 or No. 4 pick. Why risk losing the best pick this franchise has had in years because you want to play your starters?

Fields has been banged up for the better part of a month, and the more he plays, the higher the risk of a more severe injury. Especially when you look at how much he runs, you have to think a serious injury is coming. There is no way I am trotting him out there next week against a team that will be angry for how they played against Green Bay this week.

You also have guys like David Montgomery that you could sit for Khalil Herbert, and you could even go with a Dante Pettis and N'Keal Harry formation at WR. In any instance, the Bears should treat week 18 like a preseason game, as this season has been over for quite a while.

The landscape of the NFC North is about to change

Since the creation of the NFC North back in 2002, it has primarily been a two-horse race between the Minnesota Vikings and Green Bay Packers. Every now and then, the Bears found a way to win that division, but those two teams have won it 90% of the time.

However, the landscape of the NFC North is about to change as the Lions and Bears will soon be the ones controlling that division. You saw it this season with Green Bay, who may make the playoffs, but has yet to be the Green Bay of old. Once Aaron Rodgers leaves, that team is in trouble, so it could be a long few years for them.

While the Vikings have had a great season this year, they are still negative in the points difference despite winning 12 games. That shows you that when they win, they are barely getting by, but when they lose, they are getting crushed. Add in their cap situation, and that team will be forced with some tough decisions, especially when it comes to inking Justin Jefferson to an extension.

Then you look at the Lions and the Bears for their position. The Lions are the most improved team in this division and will only improve. They have had many draft picks in the last two years, and some have yet to do much due to injuries. Once they return healthy and get on the field, the Lions will take off like they have this season.

The Bears are in a similar position to where the Lions were at last season. They have a top-three pick to bring in a big-time player while having the most cap space of any team in free agency, which should allow them to sign several free agents. As long as Ryan Poles makes the right decisions to fix the problems on this team, the Bears could be one of those teams poised to go from last to first in one season.