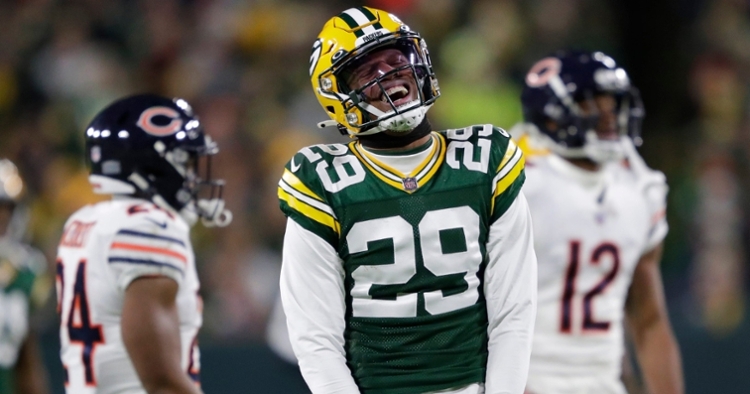 Sunday night gave the Bears a great opportunity to not only score a massive win on primetime, but to make things interesting in the playoff hunt as several teams in front of them lost on Sunday. Needing to play their best game of the season if they wanted to knock off a rested Packers team coming off their bye, Chicago was more than up for the challenge and held their own for much of the game.

There hasn't been too much to get excited about this season if you are a Bears fan, but after watching the first half of this game on Sunday, you had to like the Bears chances and how they were playing. Although inconsistent on offense, Chicago was living off big plays, especially Damiere Byrd and Jakeem Grant, who took short passes and turned them into massive touchdown receptions.

Defensively, the Bears were all over the Packers early on and, for the most part, kept them in check outside of the big plays that started to come. Add in the Grant punt return touchdown, and this team played by far their best half of football of the season, putting up 27 first-half points against one of the best teams in the league.

As good as the Bears played, the Packers were still within striking distance, trailing by six at the half. That six-point deficit turned into an 18 point lead as the Packers scored 24 unanswered points to open the second half. Chicago did their best to keep things interesting late, but as usual, the lack of second-half adjustments loomed large as the Bears fell to 4-9 with the 45-30 defeat.

Anytime you have Aaron Rodgers as your QB, he will give you a chance to win games and win the NFC North. That is precisely the case this season, as the Packers have run away with this division and are one win away from clinching the North.

Add in the ever-improving defense that has emerged as a top 10 unit this season, and the Packers have all the pieces in place to make another Superbowl run. However, at some point, good teams are going to expose the flaws of every team, and the Packers have one major flaw, which is special teams.

This is not something new, as special teams have been an issue for Green Bay for a while, just not at the magnitude it has been this season. Not only did Mason Crosby go through his struggles this season, but the special teams coverage and return game has been non-existent. The Bears exposed that on Sunday night to set themselves up on quite a few occasions, and the Packers will get burnt come the postseason if they don't address it.

Any time you talk about the Bears and Packers rivalry, history comes to mind. This is a historic rivalry that not only goes way back, but it is the longest-lasting rivalry in the NFL. Despite more than 200 meetings between the teams, Sunday night was all about history as several historical moments happened during the game.

For starters, there were 45 points scored between the two teams in the second quarter. That was the most all-time between the teams in any quarter as the action was exciting during that quarter. Second, Grant not only had the first punt return touchdown this season, but his 97-yard return tied for the longest in NFL history as his name is now cemented in NFL Immortality right now.

The final score was another historic moment as the 75 total points marked the second-highest score between the teams throughout their history. That is hard to fathom and something unexpected when the game started. If this game tells us anything, it would always be to expect the unexpected.

It hasn't happened in a few seasons, but with the loss on Sunday, the Bears are guaranteed their first losing record since the 2017 season. That is hard to believe when you look at how much Matt Nagy has struggled the last three years, but he went 12-4 in 2018, followed by a pair of 8-8 seasons.

Nagy has had an interesting tenure as a head coach, which has come with plenty of criticism. Despite that, he has taken this team to the playoffs twice in his four years, which few other coaches can say. However, fans felt that he was underachieving as a head coach, and now it appears that the organization feels the same.

Nagy was on the hot seat coming into the season, as was GM Ryan Pace. For either of them to keep their job, they had to put together not only a playoff appearance this season, but most likely a playoff win in the process. Not only will that not happen, but a losing record following a pair of 8-8 seasons also is not what the doctor ordered as this could be the final nail in Nagy's coffin.