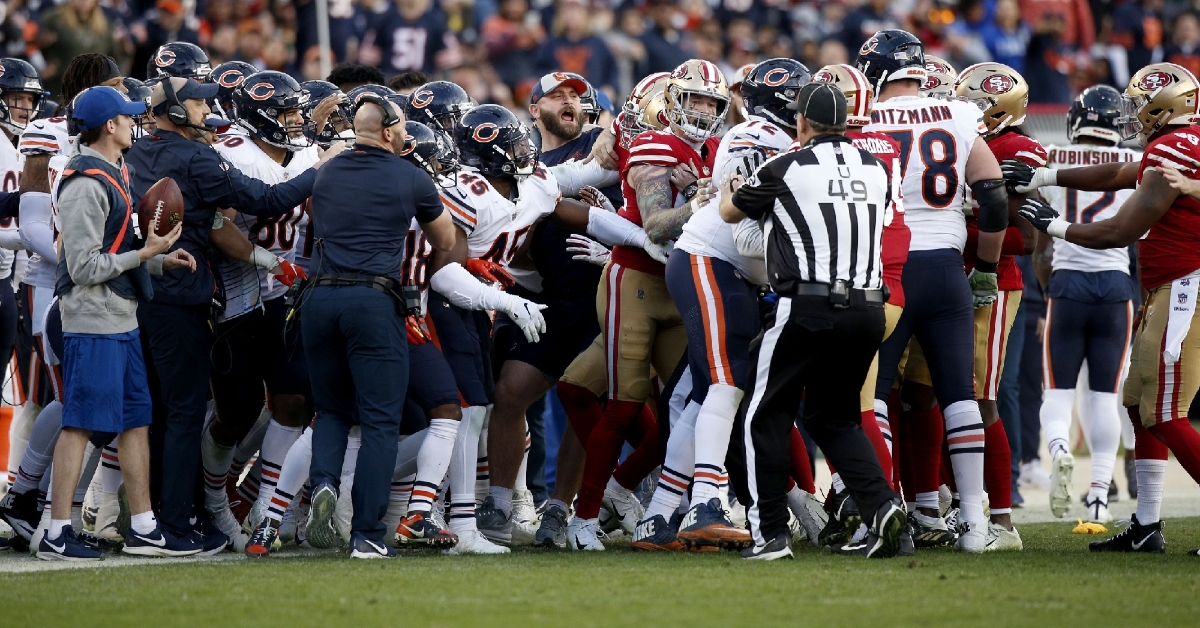 The Bears are in the middle of a challenging portion of their schedule, and so far, things haven't gone as planned. Add in Khalil Mack heading to the IR and Matt Nagy potentially out for Sunday's game with COVID, and things continue to get worse for Chicago long before they get better.

I never want to say there is an easy game in the NFL because there is no such thing as an easy game in this league. However, when you look at the team the Bears face this week in the 49ers, they are a much easier task than the Packers and Buccaneers, so a bounce-back week could be in store. Not only are the Bears a historic franchise, but the 49ers are too winning five super bowls out of six, with most of their success coming in the 1980s and 90s.

This series has been going on since the 1950s and has been played about as close as you can play it. As things sit right now, the 49ers hold the slim lead in the series 34-32-1 as the Bears will look to close that gap this weekend. When we look back to when this series began, you have to go to 1950 when the Bears won the inaugural game between the sides 32-20. That was the start of three straight wins against the 49ers and four of the first five.

The 49ers returned the favor winning three straight after that, and four of five before the Bears went on to win four of five once again as the back and forth success continued. As the teams got to the late 1950s and into the 1960s, it was about as closely contested series as you can think, with neither of the teams managing to get the upper hand. In fact, no one won more than two straight games at any point for the next 10 years.

This was a common trend until the late 1960s, when the 49ers started to grab the upper hand. Not only did they win seven of nine games at one point, but they went on to win six straight for the longest winning streak of the series to date.

The Bears followed that up by winning three straight and four of five, but another five-game winning streak from 1989-2000 had the 49ers with a nice advantage in the series.

Following their loss in 2000, the Bears had a fair amount of success against the 49ers in the early part of the new millennium as the dominant run the 49ers were on was starting to come to an end. A 37-31 Overtime victory in 2001 signaled the beginning of four wins in five meets as the Bears won three straight from 2004-06. A pair of losses in 2009 and 2012 was the last time someone won more than one game in a row in this series, and it gave the 49ers a three-game lead in the series.

In their five meetings since 2012, this series has continued to be as balanced as possible, with each team splitting victories and the Bears going 3-2 over that span. Their last loss came in 2017 by a score of 15-14, while they won in their previous meeting in 2018 14-9. If history holds to the trend going on the last 10 years, it would be the 49ers turn to come away victorious once again.

Take away that six-game and five-game winning streak where the 49ers are 11 games above .500, and the Bears have done a great job in this series, going nine games above .500 the rest of the way. Once a series filled with exciting and high-scoring games, the defense has reigned supreme over the better part of the last decade, and look for that to continue again.

Despite two great offensive minds in Nagy and Kyle Shannahan leading the way, their offenses have been less than impressive and inconsistent. Thankfully, we have two defenses capable of taking a game over on their own. It has been a while since the Bears had a winning record in this series, and hopefully, they can pull a little closer this week.