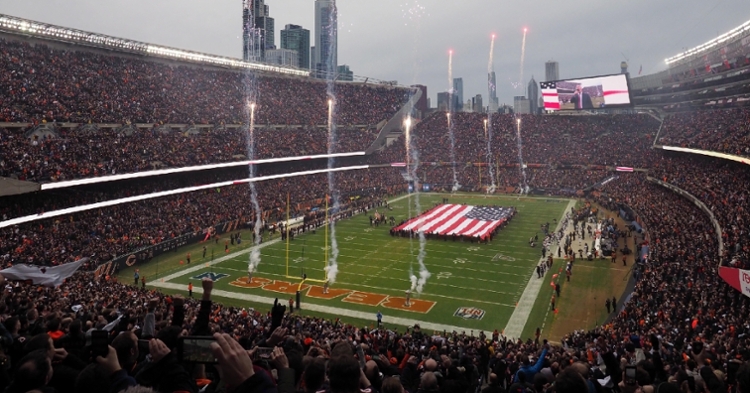 CHICAGO — The writing is on the wall for the Chicago Bears to depart Soldier Field in the coming years and move to a new stadium that has yet to be built in nearby Arlington Park. The franchise recently bid on the Arlington International Racecourse property, which is located approximately 30 miles from Soldier Field in Arlington Heights, Illinois. Also of note, Chicago mayor Lori Lightfoot has made it clear that she is not exactly eager to fund a new stadium for the Bears.

Mayor Lori Lightfoot on Chicago Bears demands: "Frankly, I'm not sure exactly what they want." But, she said, she won't negotiate in public and it's important to remember they're the Chicago Bears, not the Arlington Heights or Schaumburg Bears.

Soldier Field, the downtown Chicago home of the Bears since 1971, originally opened in 1924 and is the NFL's oldest stadium. It also has the lowest capacity of any NFL venue at 61,500. While the team's lease with Soldier Field runs until 2033, the Chicago Tribune reported on Friday that the Bears could pay an $84 million penalty to end the lease as early as 2026.

"The numbers associated with the Soldier Field lease are just small," University of Chicago sports economist Allen Sanderson told the Chicago Tribune. "$84 million is just a fraction of what a new stadium will cost."

Bears ownership probably would not hesitate to pay an $84 million fine in order to expedite the team's relocation by seven years. Assuming that the Bears' bid to purchase the racetrack property is approved, construction of a state-of-the-art stadium likely would soon follow, and the franchise could look to have the venue completed in time for the 2026 NFL season.