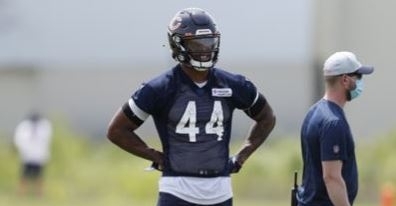 Clark was released by the Bears on Sunday

The Chicago Bears announced on Sunday that they have released tight end Darion Clark.

Clark was attempting to make the team as a converted former basketball player.

However, he was a project-type and wasn't able to show much last season unfortunately because of the pandemic year with the lack of offseason workouts and preseason.

He was on the injured reserve list last season and was signed on a future deal with the Bears back in January 2020.

He averaged 5.5 points per game in college and shot 46 percent from the field in 110 basketball games.