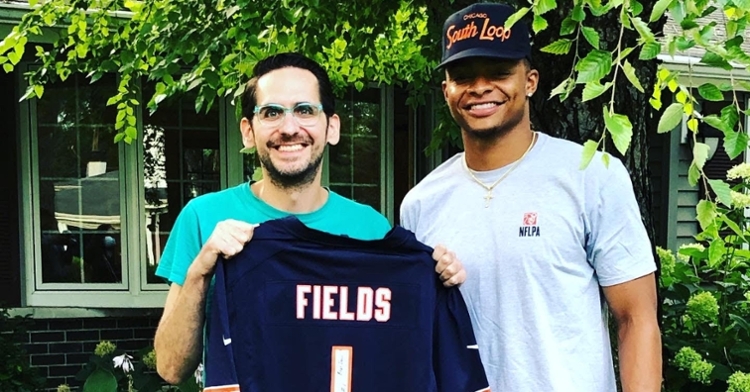 Justin Fields paid a surprise visit to gunshot survivor Scott Morrow and gifted him a jersey. (Credit: @scottjmorrow on Twitter)

CHICAGO — Rookie Chicago Bears quarterback Justin Fields has been quick to ingratiate himself to the Bears' fan base and the Chicago community as a whole. Fields' latest public display of kindness saw him visit a gunshot victim who garnered media attention for claiming that he thought of Fields while fighting for his life.

Chicago resident and longtime Bears fan Scott Morrow was critically injured in a shooting on June 20 and thought to himself — while being rushed to the hospital in an ambulance — that he could not die before having the chance to watch Fields play for the Bears. Thankfully, Morrow survived, and he recently relayed his story of drawing inspiration from Fields while appearing on 670 The Score's "Parkins & Spiegel Show."

"Within a couple moments," Morrow recalled, "I thought, 'Well, I'm 41. Pretty much all of Chicago has gone our whole lives without even having great prospects for a franchise quarterback. I can't die before seeing Justin Fields take the field, man.'"

Evidently, Fields caught wind of Morrow's story and decided to pay him a surprise visit. Morrow tweeted out pictures of Fields and Fields' parents posing with Morrow and Morrows' parents. While recovering, Morrow has been living with his parents, and Fields surprised him by showing up unannounced and presenting him with his very own Fields Bears jersey. Donations can be made to help Morrow, who is facing a lengthy recuperation, pay his medical bills here.

Just met Bears rookie QB and future Hall of Famer @justnfields (as well as his lovely parents)! I can’t believe they came out to to visit a little ol’ gunshot victim. Bear effing down! ???? Thank you, @ChicagoBears @670TheScore @ParkinsSpiegel @shane_riordan @CEmma670 pic.twitter.com/x4QUqY73Xu