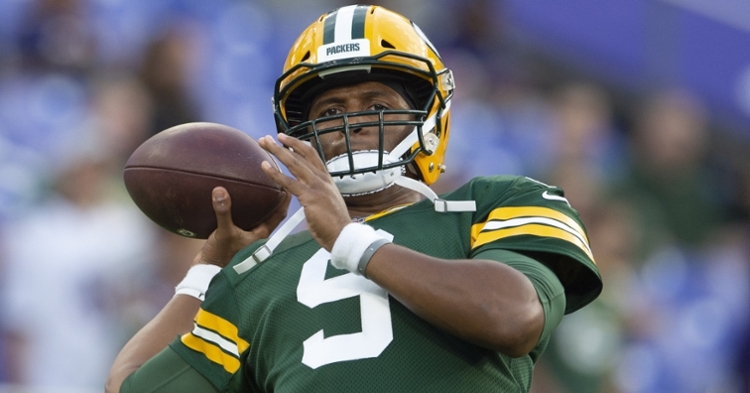 In a surprise move, the Bears are bringing in another quarterback to work out as their bye week is underway. After welcoming Kyle Sloter to the practice squad last week, the Bears don't seem to be settled on a potential quarterback change soon.

With Nick Foles now injured, next week's starter against Green Bay is certainly in question. The preliminary diagnosis looks good for Foles, but that can all change over the next two weeks. Just a few days after Matt Nagy was committed to going back to Mitch Trubisky if Foles couldn't go, Chicago decided to bring in another quarterback, confusing as to why.

The Green Bay game next week is one of those games where the Bears season could be over with that loss. They need to play their best game of the season and need their best players on the field. Maybe Trubisky gives them their best chance in that game. With another quarterback coming in, does that mean Trubisky is further away from returning than everyone thought or is this more of a move to have a reliable backup on the bench should Trubisky go down when he comes in?

With Nick Foles and Mitch Trubisky banged up, the Bears are bringing in QB DeShone Kizer for a tryout.

Chicago is currently on its bye.

Whatever the reason, the Bears are working out signal callers as Deshone Kizer is next in line. The former Golden Domer at Notre Dame and a second-round pick of the Cleveland Browns in 2017 has had an interesting career and one the Bears are familiar with. Following a very successful career at Notre Dame, Kizer had mixed opinions on his draft stock. However, the Bears seemed very interested in him as they interviewed him the most of any player.

After taking Trubisky in the first round of the same draft, there wasn't a need for Kizer, who ended lasting until late in the second before the Browns took him.

Really hope the Bears sign DeShone Kizer so they can have 2 of the top 4 drafted QBs from 2017.

The two they would have - Trubisky/Kizer.

The two they wouldn’t have - Mahomes/Watson.

Kizer started a handful of games as a rookie but didn't last too long before joining the Packers in 2018. Once again, Kizer let go and signed with the Raiders practice squad this season before being released on September 30. In his fourth league season, Kizer is going nearly two seasons without throwing a pass, so this move is puzzling.

Looking at it from a Bears perspective, the offense hasn't done anything all season, so would bringing in any quarterback at this point make a difference? This move is more of an insurance policy if neither Foles nor Trubisky can go next week. Tyler Brey would presumably take over the starting role in that Sloter or Kizer could be his back up. However, I would go with someone who has started NFL experience, so I would take Kizer over Brey, especially considering running.

This move is certainly not going to get anyone excited, and it shouldn't. As mentioned above, this is more of an insurance policy move, and the Bears need to be prepared for the worst come next Sunday. They are already down one QB and could be without two, so Chicago needs to keep that in mind. At 6-4 235 pounds, Kizer is much bigger than he looks, which is why some teams liked him come draft weekend.

Record aside in which he is winless as a starter, Kizer did show a bit of potential under Hue Jackson at Cleveland. Coming off two seasons at Notre Dame where Kizer threw for 5589 yards, 45 TD's and 18 INT to go with 1029 yards on the ground and 17 scores, many saw him as a potential dual-threat QB that could be a franchise leader.

Cleveland felt the same way and gave him the keys to the offense less than two months into the season. After that decision, things went south in a hurry as Kizer struggled to develop any aspect of his game. Not only has he gone winless as a starter, but his decision also making at the NFL level has been terrible. Along with a dismal 53% completion percentage, Kizer has just 11 touchdown passes to his name, opposite of 24 interceptions. He has added five rushing touchdowns and nearly 500 yards on the ground, that won't get it done.

The last time Bears fans saw Kizer was in week one of the 2018 NFL season. That was the game where Aaron Rodgers injured his knee before halftime and Kizer was thrown into the fire. A few plays later, Khalil Mack ripped the ball out of his hand and took it to the house as part of a huge first half by the Bears. You know the rest of that story as Rodgers returned to the game and torched the Bears the rest of the way.

Signing Kizer is not a bad decision from a depth side of things, but it is certainly not the signing to change this team offensively. At worst, you add a more reliable backup to a team desperate for QB help. Who knows, after playing with Green Bay, Kizer may have some helpful insight to give Chicago ahead of their next game.