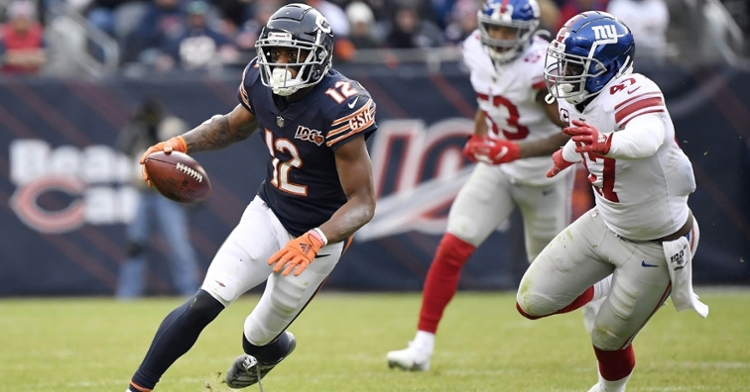 CHICAGO — Thanks to a 16-point third quarter, the Chicago Bears (5-6) were able to take care of business at home against the New York Giants (2-9) on Sunday. The Bears held the Giants to 243 yards of total offense and won 19-14 in the Week 12 matchup. The contest at Soldier Field saw the Bears shake off a pair of interceptions thrown by quarterback Mitchell Trubisky and take advantage of a strip sack pulled off by linebacker Khalil Mack. The Bears amassed 335 yards of offense and recorded 20 first downs. Trubisky went 25-of-41 for 278 yards through the air.

Late in the first quarter, a long Bears drive ended with Trubisky getting picked off in the end zone by linebacker Alec Ogletree. Midway through the second quarter, Giants quarterback Daniel Jones connected with tight end Kaden Smith for a 3-yard touchdown pass that put the Giants up 7-0. While the Bears had recently been suffering from inept kicking, it was the Giants who suffered in that department during Sunday's affair. New York kicker Aldrick Rosas missed a 42-yard field goal and a 43-yard field goal, respectively, in the second quarter, with a bad snap contributing to one of those misses. Bears kicker Eddy Pineiro made his lone field-goal attempt of the first half, which was a 26-yarder that occurred with eight seconds left in the second quarter.

The Bears trailed 7-3 at halftime but put together a fast-paced touchdown drive out of the intermission. Chicago wide receiver Allen Robinson II, who led all pass catchers on the day with 131 passing yards via six catches, caught two passes on the 60-yard march to the end zone, including a 32-yard touchdown reception. The Bears' next possession was capped off by a 24-yard field goal from Pineiro. Soon afterward, Mack sacked Jones and forced a fumble deep in Giants territory, with the loose ball being recovered by Bears defensive tackle Nick Williams.

Three plays after that, Trubisky scored on a 2-yard keeper to put Chicago ahead 19-7. Trubisky threw an interception to cornerback Julian Love the next time that the Bears had the ball, but the Giants were limited to one additional score the rest of the way. With 4:10 remaining, Giants wideout Golden Tate hauled in a 23-yard touchdown pass from Jones. However, the Giants later turned the ball over on downs with the game on the line, and the Bears won 19-14.