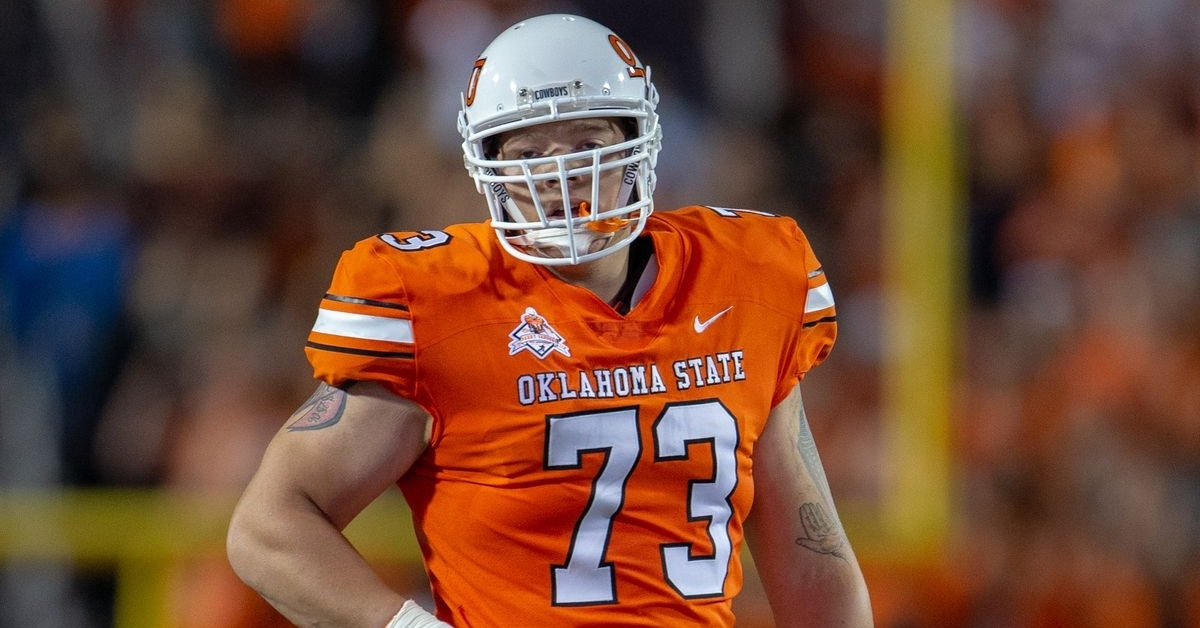 As things sit right now, the Bears have a ton of holes to fill on their roster, and most of those holes are on the offensive side of the ball. Although there is still plenty of time left, Chicago needs to make some decisions regarding its future sooner rather than later.

Deshaun Watson is still the name that Bears fans want to land in Chicago. However, let's be real for a second. Unless Chicago is willing to mortgage their future or fail to address a more pressing need, Watson still won't turn this franchise into a consistent winner. Watson's biggest problem in Houston is an offensive line, or should I say lack of offensive line.

That is an issue in Chicago, and realistically, if that isn't fixed, it won't matter who the quarterback of the future is because things won't change.

According to Mel Kiper and his latest mock draft, Chicago would indeed be addressing that need by selecting Oklahoma St. offensive tackle Teven Jenkins with the 20th overall pick.

Unlike last year's draft class, which was loaded with skill players, this year's class is all about the Quarterback position and features a strong offensive tackle class, and lots of them could come off the board between picks 15-25. Having a strong tackle is a significant step forward in anchoring your offensive line, but having a versatile tackle is even better.

Jenkins started both at the left and right tackle positions for the Cowboys and was off to a great start this season before opting out of the rest of the season in November. At 6-6 310 pounds, Jenkins is an imposing figure on the line and will immediately make the Bears offensive line better. He has long arms, which help him extend on defensive tackles, and there are not too many questions about his size and ability to play either tackle position.

If Chicago does elect to make Jenkins their man in the first round, not only will he improve the offensive line immediately, but he would be starting week one at the right tackle position. Germain Ifedi occupied that spot this season and is now a free agency, while Charles Leno Jr occupies the left tackle spot. Essentially, Jenkins could also be the future replacement for Leno Jr at the left tackle position giving the Bears other chances to improve the line down the road.

Unlike a lot of conferences in the NCAA FBS side of things, the Big 12 is known for high-powered offenses, and Oklahoma St. was no different. From an outstanding running back in Chubba Hubbard to Spencer Sanders calling the shots, Jenkins was in the middle of it all blocking for both men upfront. A once three-star recruit in high school, Jenkins needed some time to fill out his frame and adjust to the college game's speed. To do that, Oklahoma St. redshirted him his freshman season.

Jenkins entered the 2017 season as one of the top offensive line reserves in the nation, playing in all 12 games and making three starts. In 2018, Jenkins began to put the nation on notice starting 10 games at the right tackle and three games at left tackle. Jenkins continued to develop in 2019, helping pave the way for Hubbard's 2000-yard season on the ground.

When you watch Jenkins on film, you instantly become a fan. The guy is a monster and is simply a bully on the offensive line who plays angry. He is extremely powerful with a long reach and adds a lot of size to throw around. His strength is a run blocker, which the Bears want to do more of, but he also has no slouch in the passing game.

One of the concerns that teams have regarding Jenkins is that he is a good athlete but not great. The one thing that scouts immediately notice is his footwork out of his stance, as it tends to be inconsistent. His pass blocking continues to improve, but without consistent footwork, it can be a bit choppy. Either way, Jenkins is precisely the player the Bears need to improve their offensive line.