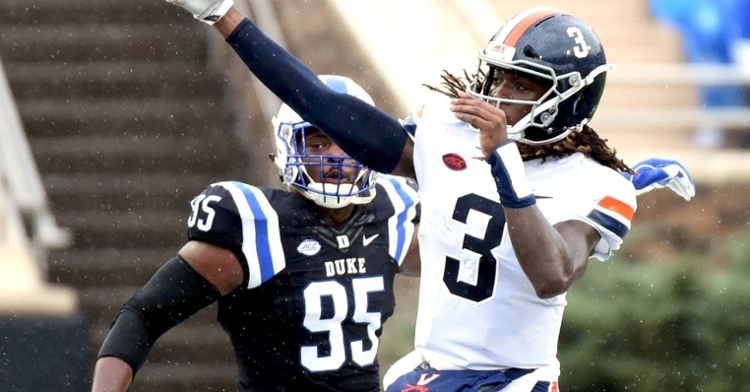 If I were to give the Bears draft a grade, I would grade them at a C+. They did fill some of their needs early on but failed to fix some other needs as the draft went on. Now, if I were to grade them on their undrafted free agent signings, I would give them a B or B – as they did a much better job identifying potential talent and added depth pieces in key spots.

With defensive tackle being one of those spots were depth was needed, the Bears brought in two undrafted rookies for help with one of the being Trevon McSwain from Duke University. A little undersized for a DT at 285 lbs, McSwain certainly didn’t let that stop him as his 6-6 frame made it hard for some lineman to get a good hold of him during blocks.

Take away his redshirt freshman season in which he played in just three games after not playing in any games the year before McSwain played in 35 games over the next three seasons and was a good player for the Blue Devil defense. During those games, McSwain went on to record 103 tackles (44 which were solo), to go with 14 tackles for a loss, and 8.5 sacks. His two pass deflections and six forced fumbles show he has a knack for finding the ball no matter where it is on the field.

He finished up his senior campaign with senior season with 34 total tackles (13 solo), four sacks, and three forced fumbles

McSwain was a gem of a player for the Duke defense, and how he fell so far in the draft to go undrafted is beyond me. With the Bears being able to sign him via the undrafted waiver wire, that is a big move by Ryan Pace. Up until the weekend of the draft, McSwain was listed as Duke’s only draftable player and was predicted to land somewhere in the sixth round. Maybe playing for Duke had some teams question how good he was.

Regardless of how he got to the Bears, McSwain is a long and athletic defensive tackle that moves around the filed very well. He plays with great technique on the line that allows him to make up for his lack of initial size upfront. Finding the ball or ball carrier has never been an issue for him as he tends to locate the ball regularly and can be a consistent contributor at the NFL level.

His height is unusually tall for a DT, so that allows him to clog up the passing game and forces QB to progress through different options. That height also comes in handy by having the long arms to drag down ball carriers and has proven he can get off blocks in tight areas if he forces lineman out of position.

While those are all plusses of a Chuck Pagano scheme, the one thing he needs to work at is no secret as he needs to get bigger and stronger if he expects to play the DT position at the NFL level. While athletic enough to make plays, he is a first step lineman who has a difficult time shedding blocks should the offensive line latch on to him at the point of contact. He has a narrow base that hinders his ability to hold ground, but should McSwain be able to add 10-15 pounds, that is when he can become a great player in the Bears system.

McSwain is an interesting pick up for the Bears mainly because of his 6-6 frame at that position. He has plenty of room to fill out that lengthy frame to make him a better overall player. As his frame fills out, he will need to add a bit more power and quickness to allow him to use his long arms to his advantage. Depending on what the Bears have in store for him, McSwain could also play as an EDGE rusher or OLB in specific schemes should he have a hard time putting on the extra weight. Regardless, he is a nice pickup for a Bears defense that needed to retool some serious depth.