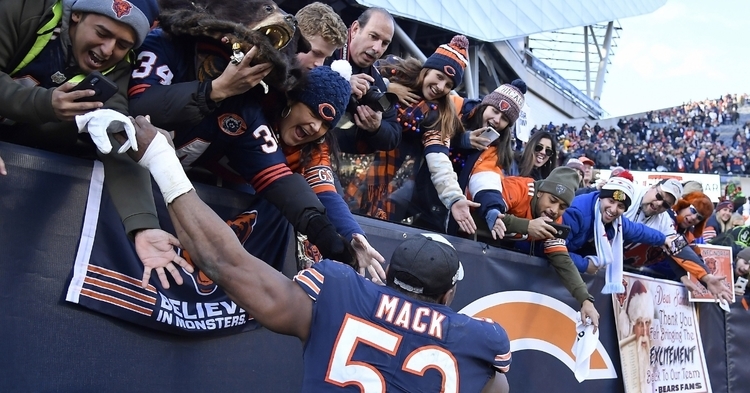 Now that we passed the quarter mark of the season, we are starting to see whom the contenders and pretenders are at this point. Although the Bears are sitting at 3-2, they are still a contender if you would ask most experts, but the Bears certainly have not looked the part of a contender so far this season.

That got me thinking, where have the previous playoff teams the Bears have given the city of Chicago standing at the bye week as opposed to how they have finished the season. With so many playoff seasons in Bears history, it would take forever to go through all those scenarios. Let's focus on what they have done in the 2000s to show where they have stood at each season's bye week.

Even though Chicago is sitting at 3-2 and entering a rather early bye week, this team has been hit especially hard with the injury bug the past two weeks, so the bye week is coming at a perfect time. Chicago is hoping they can use this week to rest and cover as the bye week has been a pivotal turning point for the past four teams that have made the playoffs.

2018: Look at last season, for example, as that was the most recent of their postseason appearances. After dropping their first game of the season to Green bay, the Bears ripped off three consecutive wins to move to 3-1 on the season before reaching a week five bye. After laying an egg at Miami following their bye to fall to 3-2, but then things changed in a hurry.

Not only did the Bears close out the season going 9-2 to finish 12-4, but they managed to take home the NFC North division title by 3.5 games over second-place Minnesota. That record also earned them a home playoff game as they secured the Number 3 seed in the NFC. Just when it looked like the Bears were on the verge of a divisional-round appearance, a late Nick Foles touchdown pass followed by a missed Cody Parkey field ended that notion with the Bears bowing out in the first round.

2010: This season was much different for Chicago as they waited until nearly the halfway point before landing the bye week. With Jay Cutler running the show on offense, Chicago played inconsistently out of the gate as they reached the bye week with a 4-3 mark. That record was mostly due in part to a new offensive coordinator in Mike Martz and Cutler missing two games with a concussion causing the Bears to struggle early.

The critical turning point in this season was the way the Bears responded coming out of the bye as they ripped off five straight wins to improve to 9-3 before taking the division with an 11-5 record. Credit the offensive line for the way the team responded out of the bye week as they went from allowing 4.5 sacks per game to just over two down the stretch. The Bears would make the NFC championship game that season where their season ended.

2006: The 2006 season had the looks of a magical year as the Bears rolled into the bye week with a 6-0 mark. This team had a very similar resemblance to the 2018-19 Bears as the defense bailed the offense out in a lot of their wins, but the entire team looked horrible in their losses. Still, the Bears went 7-3 down the stretch anchored by the tough defense and a great rushing attack from Thomas Jones to finish the season as division champs with a 13-3 record.

That defense was once again tremendous in the playoffs as they continued to wreak havoc in the turnover category culminating in 44 takeaways during the season. Add in the big-play ability from Devin Hester in the return game, and it came as no surprise to see the Bears in the Superbowl this season where they fell to the Colts. Hester provided most of the excitement for the Bears returning the opening kick for a touchdown, but the offense couldn’t get much going after that as Peyton Manning was able to pick through the Bears defense for the win.

2005: Leading up to the Bears 2006 Super Bowl run, was a season that could have gotten out of hand in a hurry. With Rex Grossman starting the season, the Bears never looked that comfortable offensively, getting out to 1-2 start before having the earliest possible bye you can have. That poor start was primarily due to Grossman being lost for the season with a preseason ankle injury as rookie Kyle Orton stepped in.

Although it took Orton a little while to get comfortable, he eventually provided the perfect amount of stability at the quarterback position while a strong running and tough defense powered the Bears to a 10-3 record after the bye and an 11-5 record for the season en route to a playoff berth. The 2005 team may be the closest thing we have to this season's team if we dive into the numbers.

It was in that season where the Bears won ugly as eight of their 11 wins came when Chicago scored 20 points or less. Does that sound a little familiar? Through five games this season, the Bears have had only one game in which they scored more than 21 points, and that was their week three win against Washington.

Much like this season where the Bears lean on Khalil Mack, Akeem Hicks and the rest of the Chicago defense, the 2005 Bears featured their own dynamic duo as defensive ends Alex Brown and Adewale Ogunleye stepped up to combine for 13 sacks and 24 tackles for loss after the week four bye week. It was their presence on defense that kept the opposition off balance to give their offense a chance, which is very similar to this season’s team.

We don’t know the outcome from this season's team yet, but if history continues to show itself, the Bears tend to make the playoffs when they play well out of their bye week. The Bears have had most of their regular-season success with teams very similar to their style of play this season. Chicago has never had a problem winning ugly as they have been known to have tough defenses and an excellent running game. Apart from Cutler at QB, Chicago has been effective going with a game manager at the quarterback position.

The Bears know their DNA as a team and have no problem using that to their advantage. Winning ugly can undoubtedly get them into the playoffs again in 2019, but for the Bears to take that next step, the offense needs to start putting up some more significant numbers. Looking at the schedule the Bears have this season, it will be tough to win 12 plus games. I do fully believe they could go 7-4 down the stretch and finish 10-6 this season, which would land them in the wildcard and division hunt once again.