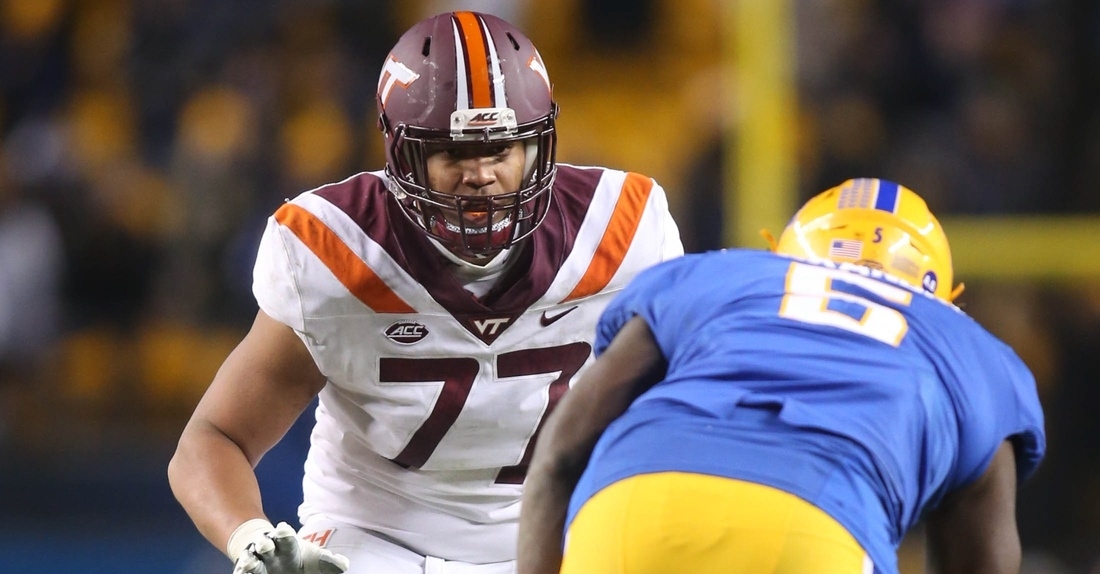 With the Bears still looking to improve their team, Ryan Pace is now focusing on restricting deals to clear up cap space. Cody Whitehair and Eddie Jackson are next on the list to create enough money to make a run at Russell Wilson or other free-agent quarterbacks.

Shifting focus back to the draft for a moment, and the more you look at Mock Drafts or listen to experts, the more they feel the Bears need to focus on the offensive line in the first round. Todd McShay is certainly one who feels that way as his most recent Mock Draft does indeed have the Bears taking an OT in the first round and a good one at that.

Virginia Tech OT Christian Darrisaw is who McShay likes for the Bears at 20, and it is easy to see why. While they still need a better QB play and need to decide on Allen Robinson's future, he is the one that could alter what the Bears do at 20. I see Robinson returning in some way, so given the offensive line's state, the Bears need to focus on that early and often.

Darrisaw is a powerful left tackle that brings a mean attitude with him. Not only that, he doesn't allow too many sacks as he plays angry, allowing him to overpower defensive linemen. The thing that stands out most about him is his run blocking ability, something the Bears will love. A team now more focused on running the ball, Darrisaw loves to run block and is often seen in the second level pushing defenders back and clearing up space.

Not only will that create space for David Montgomery and Tarik Cohen in the backfield, but it will give whoever is under center more time in the pocket to make things happen. The offensive line is one of the most significant needs for the Bears at this point, but the OT position is at the top of their list. Both Bobbie Massie and Charles Leno Jr will be returning and have shown signs of success before, but both are inconsistent, and that doesn't bode well.

At 6-5 and 314 pounds, Darrisaw would not only be counted on to contribute right away but could be someone the Bears would trust to start at tackle in week 1. Darrisaw also has the work ethic to get better, given when you look at his career path. Darrisaw was the 171st best defensive linemen in his class, a low three-star recruit out of high school. Four years later, he looks like one of the top five prospects in terms of offensive tackles.

Virginia Tech like what they saw in him, and they were his only D1 offer out of school. They made the right choice bringing him in as he not only improved every season but anchored their line at the tackle position. Darrisaw is the perfect size to play the tackle position, but he has also put on 15-20 pounds of muscle in recent summers. That proves that he can still get bigger, which is scary to think about.

Not only is he physically imposing, but his size hasn't affected his ability as he remains very athletic, putting that on display across the line of scrimmage. His upper body's strength is what stands out in the running game, but he also has incredible lower body strength, which helps him anchor down in the pass protection game. Darrisaw is considered a people mover, and the Bears need his services.

As good as he is at blocking, he does need to improve his overall footwork. At times, he relies too much on pure strength and stops moving his feet. To be successful at the next level, he needs to keep moving his feet, and the strength will do the rest. While his pass blocking is decent, it isn't at the level of his run blocking given how he uses his hands. Darrisaw often centers his hands too much, and in passing down situations, you can't be neutralized.

Both are issues nonetheless, but they are not serious issues that should worry scouts. Things like this can be easily fixed and coachable with experience, and Darrisaw is a sponge who is ready to soak up and learn everything.