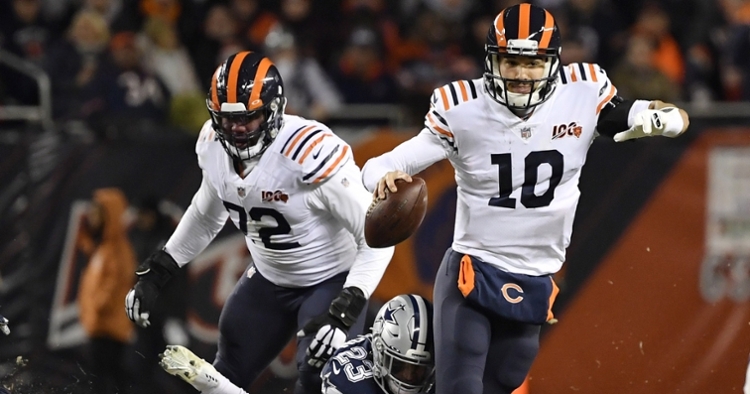 CHICAGO — Playing on Thursday for the second-straight week, the Chicago Bears (7-6) won their third game in a row by taking down the Dallas Cowboys (6-7) in Week 14. The Bears led 24-7 entering the fourth quarter and were able to stave off a Cowboys comeback at Soldier Field. Bears quarterback Mitchell Trubisky threw for 244 yards on 23-of-31 passing and tossed three touchdown passes. Chicago suffered two turnovers and was outgained by Dallas in terms of total yardage, but the Bears' red-zone efficiency enabled Chicago to come away with a 31-24 victory.

The Cowboys ate up plenty of clock on the game's opening drive, which ended with running back Ezekiel Elliott scoring on the ground from two yards out at the 6:03 mark of the first quarter. The Bears were held scoreless in the first period but scored 17 points in the second quarter. A 36-yard field goal by kicker Eddy Pineiro was sandwiched between two touchdown receptions by Bears wideout Allen Robinson II. Robinson finished with five catches for 48 yards, and his touchdown snags were five and eight yards, respectively.

In the third quarter, the Bears went up by 17 points on a 14-yard pass from Trubisky to wide receiver Anthony Miller that finished off the first drive out of the intermission. On the opening play of the fourth quarter, Elliott scored another 2-yard rushing touchdown, and Trubisky responded by scoring on the ground soon afterward. An impressive 23-yard keeper placed the Bears ahead 31-14 with 13:22 remaining in the contest. Later, Cowboys quarterback Dak Prescott teamed up with wide receiver Amari Cooper on a 19-yard touchdown pass with 4:29 on the game clock.

The Cowboys opted for a short field-goal attempt with eight seconds remaining, and kicker Brett Maher made the 31-yarder to pull Dallas within one possession of Chicago. However, the Bears recovered the ensuing onside kick, securing their 31-24 triumph. Unfortunately for the Bears, they lost star linebacker Roquan Smith to injury during the course of the contest. Chicago has not lost a game at home since October and is still very much alive in the playoff race.