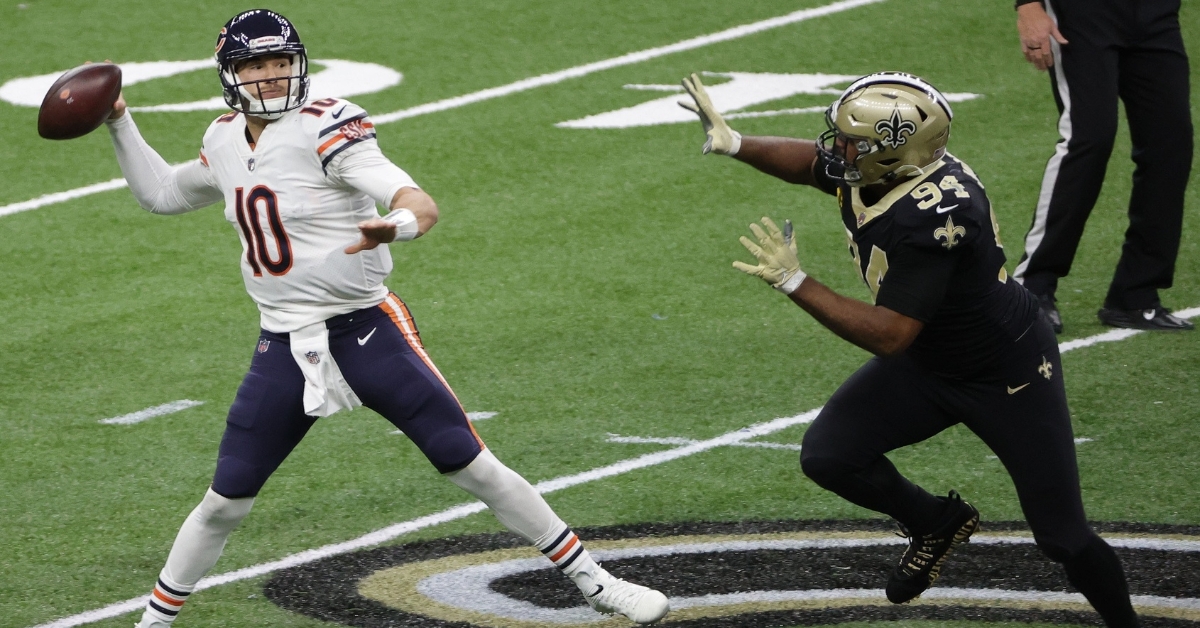 Despite somehow sneaking into the postseason with an 8-8 record, the Bears were exposed on Sunday. A season of ups and downs has come to an end, sending the Bears into a tumultuous offseason.

Let’s give out our usual position grades for the Bears, who had their seasons ended by Drew Brees and the Saints, 21-9.

Trubisky has had some great games since re-becoming the Bears starter, but Sunday wasn’t quite one of them. The Bears clearly have limitations with him under center, and that was on display once again. After putting up 30 plus points in four straight games, the Bears end the year putting up just 16 against the Packers and nine against the Saints. Trubisky completed just 19 passes for 199 yards and a garbage-time touchdown as time expired. Since he did not turn the ball over, Trubisky earns a C- rating.

Should the Bears bring back Mitch Trubisky for his 5th year? pic.twitter.com/4aIxCktpml

David Montgomery has been a bright spot for the Bears down the stretch. However battling through injury and up against the Saints stingy run defense, Montgomery rushed 12 times for 31 yards. Cordarelle Patterson and Ryan Nall combined for two carries as well.

This unit performed admirably enough to earn a D+. Allen Robinson did not have his usual game, catching just six passes for 55 yards. Rookie Darnell Mooney sat put due to injury, and in his absence, Anthony Miller caught a pair of passes before being ejected. DeAndre Carter and Riley Ridley combined for five catches. Javon Wims had one great catch, but he dropped a would-be touchdown. Sunday was not this unit's best day.

This unit, with an overfilled position room, had a solid day on Sunday. Rookie Cole Kmet and Jimmy Graham each were involved. Kmet paced the unit with three grabs for 16 yards, while Graham had a pair of catches and one touchdown.

The offensive line has been getting hot at the right times. This unit not only was able to generate a nice push in the run game but also kept Mitch Trubiksy upright — allowing just one sack. This unit is moving in the right direction as the offseason approaches.

The D-line wasn’t great on Sunday. The unit had Hicks, but they still struggled against the run. They were able to hurry Brees a bit but couldn’t hit him either. The one turnover came on a forced fumble of Taysom Hill.

Khalil Mack was quiet for the Bears, picking up just one tackle. The usually involved Roquan Smith was injured, which hurt the Bears defense. Danny Trevathan had nine tackles and fourth-string Manti Te’O struggled in Smith’s absence.

The Saints had some big plays — including the Bears secondary getting torched multiple times. The secondary was a weak spot as the Bears struggled to get off the field. However, they were without several defensive backs, which made that difficult. This unit struggled to make the game-changing play all year — although Gipson did make a sack and force a fumble.

7. Kindle Vildor had seven solo tackles. Duke Shelley had a pass defense and should’ve had an interception.

They really stepped up.

It’s crazy to think Eddie Jackson was the worst defensive back on the field for the #Bears.

Cairo Santos was 1-of-1 on field goals as a lone bright spot. The return game was kept in check, though.

A bright spot this season? Kicker Cairo Santos finished the year making 31 of his 33 attempts (94%). That's the highest made FG% in franchise history (Min. 10 attempts). #Bears

Bill Lazor and Matt Nagy combined to call a very conservative offense aside from the gadget play hat was dropped. Trubiksy was not able to take shots, and there were some questionable play calls, especially late.

Matt Nagy says that nothing has changed over the last six or seven weeks in terms of playing calling. So if you take that for it's value, Bill Lazor called plays the entire time. #Bears

Nonetheless, this team finished the regular season 8-8 and couldn’t advance any further in the playoffs. To the offseason, we go.