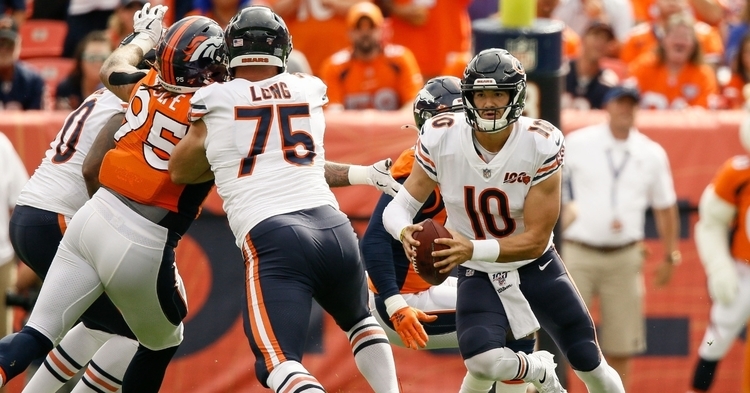 The next part of the season in review series focusses on the least talked about unit on the field but perhaps the most important at the same time. In case you haven’t figured that out yet, we shift to the offensive line as they are the backbone in any offense.

Regardless of how good of a quarterback, running back, or wide receivers you have, your offense will never reach its full potential if the line play is subpar. That is precisely what the Bears experienced this season as their offensive line played very poorly as a unit. They played so poorly that it cost the OL Coach his job as part of a coaching shuffle on offense.

With new OL Coach Juan Castillo bringing his successful pedigree to the table, the Bears will have a lot to improve on but hope the tutelage from Castillo mixed with the pieces they have work wonders in 2020. For starters, the Bears had to deal with tons of injuries on the line last season capped off by Kyle Long, who announced he would be stepping away from the game before next season. That will undoubtedly be a big hole for the Bears to fill moving forward.

Looking at the tackle situation, the Bears relied heavily on Bobbie Massie and Charles Leno Jr to anchor the outside. Massie, started ten games in 2019, while Leno played in all 16. If you want to talk about overall consistency, Leno certainly fit that build as he was one of the lone linemen who was able to stay healthy throughout the entire season. Both men established themselves as key components at the tackle position, so the Bears should be happy with both going forward into next season.

Moving to the Guard position and you have Rashaad Coward, Ted Larsen, and Corey Levin at RG with James Daniels on the left side. Much like the tackle position, the right side of the line was decimated by injuries with Coward starting ten games all in place of Long when he was lost for the season. On the flip side, it was Daniels establishing himself as an everyday fixture as he remained healthy all season long.

Most offenses thrive when you have two physical guards who can blow the roads up the middle and keep their QB upright. With all the constant turnover on the right side of the line early on, the Bears were never able to establish their physicality as quickly as they like until it was too late to do so. When the physicality came back, you began to see the offense everyone expected, which is a significant building block going forward this year.

The Center position was huge for the Bears this year as Cody Whitehair moved back to his natural position after playing guard the past two seasons. Not only was that the right choice, but Whitehair played in all 16 games himself starting every one of them in the process. That was a good thing for Mitch Trubisky as the two of them had great chemistry under center all season. Don’t expect Whitehair to be shuffling around anytime soon as he looks to be the Bears long-time fixture at the Center position.

We all know the Bears struggled to block last season, and even though that is the coaches' and player's fault for not adjusting, injuries certainly played a huge role in why. When you lose, have your line, or should I say the whole right side, things won’t come easy in terms of blocking or blocking schemes. Just when you start to get comfortable with one another, someone goes down with an injury meaning a new piece must be inserted.

Once that happens, the continuity is not there, which is why the Bears struggled early in the season. Even with all the injuries and shuffling going around, the Bears started to put the pieces together midway through the season and managed to have the same five starters 9 of the final ten games of the season.

That was very important for Trubisky and the entire offense, and it showed with the production on the field. After their 3-1 start, the Bears went 1-5 over their next to fall to 4-6 when the injuries began to pile up. Once they patchworked the Oline, the Team finished 4-2 over the final six games, but it was the offense that started picking up steam to bring a smile to Bears fans.

Not only was the running game playing at a more consistent level, but Trubisky played a five-game stretch where he was playing the best football of his life. That was all because the Bears had the same group of lineman for a long time, so chemistry was certainly starting to show on the field. With a new and very successful coach, mixed with full health next year, this unit will only get better with time.

Season Grade D+: Unlike regular position grades, you must grade the OLine because they don’t put up individual stats. Depending on how you look at things, I would give this group a D+ based on their efforts this season. Let’s be real; the line was not good early on and did not live up to their 2018 standards. However, with all the constant changing of the pieces, can you blame them.

That is the main reason why I am not as hard on them as I could be. Injuries certainly hurt a team, especially when the Bears were losing lineman at what seemed like a weekly rate early on. Had the same unit of guys played all 16 games the way they the final month or so, you would be looking at a group in the C+ range as they were vastly improved as the season went on. For now, they will take the offseason to reflect and hopefully get back to what they do best in 2020.