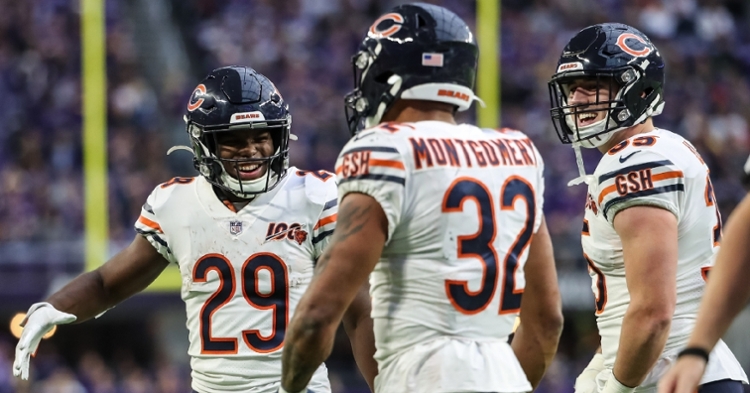 Being a sports fan is never easy as you must take the bumps and bruises while riding the highs and lows of your favorite team. For Chicago Bears fans, this season brought a whole new meaning to the word roller coaster as the Bears certainly played with fans' emotions all season long.

From a 3-1 start to losing five of the team's next six games, the Bears never got into a rhythm that had them finishing first in the NFC North a season ago with a 12-4 record. A strong 4-2 finish to the season was good momentum heading into the offseason, but even with that, the Bears finished third in their division with an 8-8 record.

They did manage to finish 4-2 in the division, however, sweeping both the Lions and the Vikings with the later of the two coming on Sunday in Minneapolis.

Here are three takeaways from the Bears gutty, but ugly 21-19 over the Vikings.

With most of their starters sitting ahead of their postseason game against the Saints this week, Minnesota treated the Bears like a preseason game as they had nothing to play for. That right there should have been an easy win for the Bears as the Vikings have no threat offensively in terms of reserve players.

What looked to be a cakewalk of a game early on with the Bears cruising to an 18-6 lead, suddenly turned into a battle as the Vikings came roaring back with 13 fourth-quarter points to take a 19-18 lead with less than five minutes to go. With one drive left to seal the deal, the Bears put themselves in a position to strike as they got the ball inside the Vikings 10 with under 20 seconds to go.

That is where Eddy Pinero came through as he has done often putting home a 22-yard field goal for the 21-19 Bears win. That capped off a perfect 4-4 field goal kicking game, which was an ideal ending for the Bears whose final game last year came on a missed kick.

2. Trubisky saves his best for last

No, this isn’t talking about his overall game despite that he did play well once again, but more so about his final drive of the 2019 season. After leading the Bears to several decent, but mainly field goal drives, the Vikings defense started to figure him out in the fourth quarter, eventually taking the lead on an Ifadi Odenobuo strip-sack to put the Bears behind by a point with less than five to go.

With all three of their timeouts left and needing a field goal to win, Trubisky put the team on his back and orchestrated his best drive of the game when it mattered most. However, it almost was worth nothing as the Bears were faced with a fourth-down situation around midfield only to have Trubisky make his best throw of the game to rookie Riley Ridley setting things up for the game-winning field goal.

Trubisky finished the season with over 3000 passing yards, which hasn’t been done since Jay Cuttler was handling the offense. We will see the progression he makes next season as he has rebounded the final six weeks of the season nicely to give the Bears fans some hope in his future.

Take nothing for granted

After four straight seasons of finishing in last place in the division, Matt Nagy got the team over the hump in his first season, winning the division and making the postseason. This season, the Bears got off to a great start, but the overall consistency was not where it needed to be for them to make a legitimate playoff run.

As fans, we expect our teams to be competing for the postseason every single year. However, we don’t realize how hard it is to win in the NFL, as I firmly believe that is the only sport where you can go from first to last or vice versa in the course of an offseason. The Bears can attest to that themselves going from previous to first back to third in the course of three seasons.

For Chicago, they can’t take anything for granted for what they have accomplished despite missing the postseason this year. Their goal was to make it to the playoffs, but unlike most years, the NFC was flat out loaded this year with only the NFC East champion Philadelphia Eagles getting in with nine wins. Every other playoff team had ten or more with three teams with 13 wins. That shows you right there that everything needed to go right for the Bears to make a postseason run, and luck wasn’t on their side.

Chicago suffered from inconsistencies on both sides of the ball, mid-season kicking struggles, and a plethora of injuries that caused several critical setbacks along the way. The best part that came from this season was the fight that this team showed as they refused to give up until the end. We also got a glimpse of the future of this organization as several reserves had to play key roles this season and did so at a starting level.

Don’t panic Bears fans. There is plenty of hope and optimism heading into next season as Chicago will once again bounce back to contend for the NORTH.