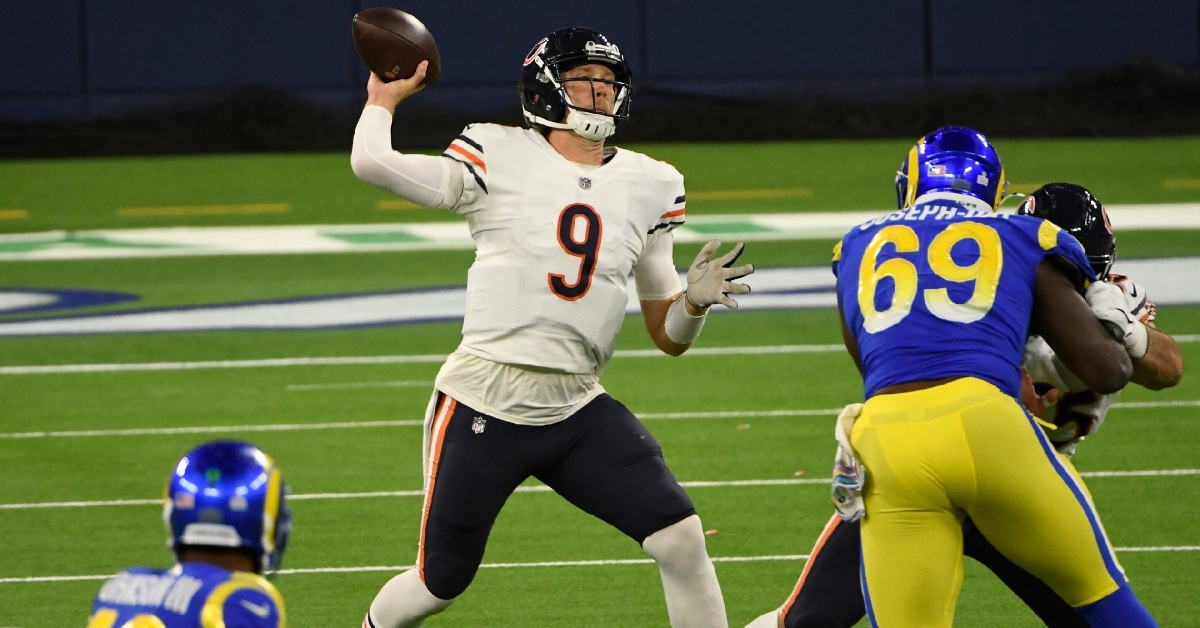 It was a crazy week for the Chicago Bears, and frankly a disappointing one. The Bears had an opportunity to show the league they were a legit team and not a fluke, and instead, they had their wheels blown off on Monday night.

Let’s give out our position grades for the Bears, who were defeated by Aaron Donald and the Rams in a 24-10 loss.

Nick Foles was not particularly sharp in this one; in fact, he kept his streak going of consecutive games with an interception, leading the NFL. Foles now has six picks in just four and a half games. He was under heavy duress, missed a few crucial throws, and in the end, lost the game. Is it time for Mitch to come back?

Chicago Bears HC Matt Nagy was asked about going back to Mitch Trubisky and he said that he isn't considering a QB change. Said that he has a lot of confidence in Nick Foles.

Nagy also said that as of now he isn't giving up play calling.

David Montgomery tallied 48 yards on 14 carries. Although he has been unable to break any big plays, Montgomery has been okay for the Bears. Montgomery also caught five passes for 21 yards out of the backfield. Patterson only tallied three carries and three catches, nothing too impressive for this group.

David Montgomery was the #Bears highest-graded offensive player against the Rams at 78.3 overall

This unit performed admirably enough to earn a C+. Allen Robinson had just an okay game with four catches for 70 yards against a tough Rams defense. Rookie Darnell Mooney caught three passes for 40 yards and some good routes but could not be found by Foles. Anthony Miller will look to be involved more, but he grabbed three balls for just 20 yards. Big roadblock for this unit on Monday night.

This unit, with an overfilled position room, had a solid day on Sunday. Rookie Cole Kmet caught two passes for 45 yards, but the terrible drops from Demetrius Harris overshadowed his performance. Jimmy Graham continued to be a big part of this offense with another five catches for 31 yards.

Matt Nagy: "Cole Kmet is going to start playing more in this offense. He deserves it. He's earned it."

The offensive line did a terrible job protecting against LA. The o-line gave up four sacks and could not generate a push in the run game. Some injuries mixed with a bad effort show this unit is the Bears’ weakest one.

Bears OL so bad even Leonard Floyd can get a sack.

The D-line was not great on Monday. The unit pressured Goff but could not get to him that much. The line couldn’t get into the backfield and stop the run either, and the unit took numerous tough penalties — they’ll bounce back for sure.

Khalil Mack was solid for the Bears, getting involved often and tallying a sack. Roquan Smith had eight tackles, and Danny Trevathan had five. This unit was not great in coverage and needs to rebound this week.

Khalil Mack with the jab ole.@fiftydeuce sets the OL up with the jab step then flashes the hands before reducing his hitting surface. The OL bites on the jab & falls forward when he shoots his hands & Mack isn't there anymore. Mack finishes with the arm over #passrush #bears pic.twitter.com/3wDi9OoZQE

The Rams did not have any huge plays, and the receivers were mostly slowed down. Kyle Fuller gave too many cushions in coverage, and Tashaun Gipson dropped a pick. Eddie Jackson had a fumble recovery returned for a touchdown, and he added nine tackles.

Last night Eddie Jackson became the fourth player in #Bears history to score at least six defensive TDs, joining Charles Tillman (9), Mike Brown (7) and Lance Briggs (6). Here's how many games it took each of them to reach 6 TDs:

Cairo Santos made a field goal, punts were okay, but returns from Cordarelle Patterson and the lack of Ted Ginn’s returns were bad.

There are absolutely issues with the play calling. The Bears don’t use the tight ends enough, Cordarelle Patterson is not a running back, etc etc etc. This team needs to correct the play calling, and maybe that means have Nagy give up play-calling duties.

Matt Nagy on if he'll give up playcalling duties: "That's the very first thing I look at ... I'm really, honestly, not opposed (to giving up play calling). Right now where we're at, that's not where we think it's at."

Nonetheless, this team is 5-2 and looking to make it 6-2 at home against Drew Brees and the Saints this week to stay afloat in the loaded NFC.