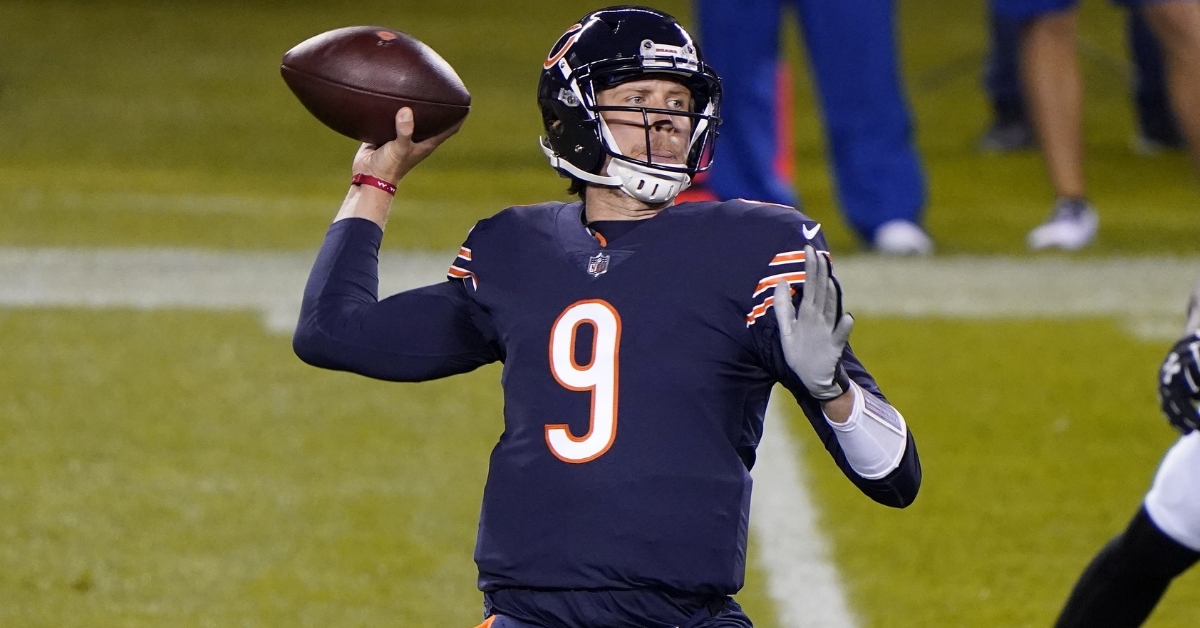 It was a crazy week for the Chicago Bears. The second full week with the quarterback change, a primetime showdown against Tom Brady with his new team, and ultimately a huge win for the Bears.

Let’s give out our position grades for the Bears, who defeated Tom Brady for the first time and handed him his first Thursday Night Football loss in a 20-19 win.

Quarterbacks B-: Nick Foles earned the starting job with a dazzling come-from-behind win over the Falcons and showed why when he outdueled Tom Brady. Foles threw for 243 yards and a touchdown, as well as an interception. Foles and the entire offense seemed to find the rhythm that they lacked a week prior. Despite the ugly start, a strong finish earns Foles a B-.

64.4% of Nick Foles' passes this season have been thrown in less than 2.5 seconds (3rd highest in the NFL)

34.7% of Mitch Trubisky's passes were thrown in less than 2.5 seconds (lowest in the NFL)#Bears pic.twitter.com/ujovefHfRe

Running backs C: The running game was able to bounce back a little against a strong Bucs defense without Tarik Cohen. David Montgomery found the end zone and tallied 29 yards on ten carries. Patterson garnered some carries as well and accumulated 7 yards. Out of the backfield, Montgomery and Patterson both caught passes as well. Montgomery caught seven passes for 30 yards, and Patterson hauled in three for 38 yards.

3. David Montgomery will come across as average from the stats, but his play stood out a lot.

His 3-yard TD helped steady the #Bears after floundering most of the first half.

Then his clutch 17-yard grab on a great read and throw by Foles set them up for the win. pic.twitter.com/O1kgQCZvkr

Wide Receivers B+: This unit performed admirably enough to earn a B+. Allen Robinson had another solid game with ten catches for 90 yards. Rookie Darnell Mooney caught a pair of passes. Anthony Miller will look to be involved more, but he grabbed four balls for 28 yards. Expect this unit to keep growing with more time to work with Foles.

Tight Ends B: This unit, with an overfilled position room, had a solid day on Thursday. Although rookie Cole Kmet didn’t get involved, Demetrius Harris caught one pass. Jimmy Graham seemed to have solidified himself as a big part of this offense with another three catches for 33 yards, including an incredible one-handed touchdown grab.

Offensive Line B- The offensive line did a solid job protecting against one of the league’s strongest defenses. The o-line gave up three sacks but did enough to protect the Bears. On the run side of the ball, the line was okay, but the run game was not quite solidified. Not exactly a strong unit, but a solid game from the o-line.

Defensive Line B+: The D-line was great on Thursday, pressuring and knocking Tom Brady around all game. One sack from James Vaughters and strong performances from Akeim Hicks helped, but there was a strong running attack from the Bucs. The loss of Eddie Goldman hurts this unit as they move forward.

Khalil Mack and Akiem Hicks have been elite for the #Bears through five games.

Linebackers A: Khalil Mack was phenomenal for the Bears, dominating the game and putting pressure on Tom Brady all game long. Mack came away with two almost three sacks and set the tone for this unit. Roquan Smith had six tackles, and Danny Trevathan had seven.

Secondary A-: The Bucs did not have hardly any big plays, and the receivers were mostly slowed down. Kyle Fuller laid a massive hit to force a fumble, and the secondary was active all game long breaking up passes, including a fourth-down stop late in the game. I loved what this unit showed.

Special Teams B: Cairo Santos made two field goals as the second was a game-winner. Santos is putting pressure on the Bears to keep him when Eddy Pinero is healthy. A few strong returns from Cordarelle Patterson that equaled 119 yards in three tries helps this grade as well.

Playcalling B: A terrible start from the offense was recovered by a strong push late in the first half. Adjustments still need to be made, but there were flashes of a formidable offense in there; it is up to Matt Nagy to find it.

Nonetheless, this team is 4-1 and looking to make it 5-1 on the road against Teddy Bridgewater and the Carolina Panthers this week.