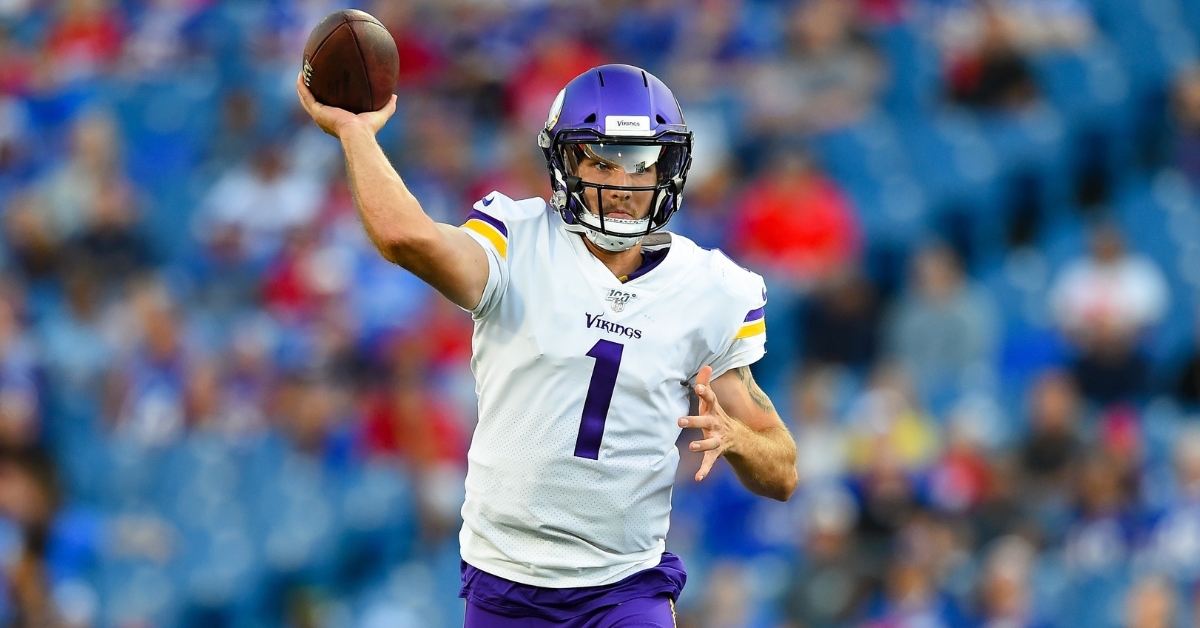 Entering the 2020 season, we already knew the quarterback position was going to be watched during training camp. Both Mitch Trubisky and Nick Foles are competing for the starting job, and it appears Matt Nagy is going to let this play out long term. However, those are not the only two names in a suddenly crowded quarterback room as other battles are starting to take shape.

Tyler Brey was already the third quarterback on the roster, but last week the Bears brought in former North Texas QB Mason Fine for a workout. It looks like a former division rival is set for a workout this week as former Minnesota Vikings backup Kyle Sloter will be working out in Chicago. This means for the QB battle remains to be seen, but this could be a developmental project if it pans out, something the Bears have desperately needed.

Ideally, teams want QB's that know their offensive system and know how to teach it to others. At some point, however, you need to start looking at the bigger picture by maybe finding someone who you can develop within your system. That could be Bears's thoughts on bringing in Sloter as there is a lot of intrigue in his game.

Sloter is not a household name around the NFL, but the kid has some game. Before signing Kirk Cousins three seasons ago, many of the fan base in Minnesota loved what they saw from Sloter and wanted him to have a shot at the starting quarterback position or the very worst the backup spot. Instead, Minnesota elected to go with Trevor Simeon and Sean Mannion as backups, which allowed Sloter to leave and link up with both Arizona and Detroit in 2019.

Now entering his fourth season in the league, Sloter will be working out with his fifth different team but could give the Bears some helpful insight on two of their divisional opponents. Known for a being a preseason start with the Vikings, Sloter does have a few starts under his belt with the Broncos, so a starting role is something a team has seen in his abilities before.

Now at 26 years old, Sloter is set to work out with the Bears once he clears the quarantine protocol that is required. Looking at his career track record and how he fits on specific teams unless he is willing to accept another third-string job with the Bears should he beat Brey out for that, I don't know the long-term plan is for him. Maybe it is just bringing him in to pick his brain about the Lions and Vikings. After all, getting the edge on your opponents is all part of the game, and there is nothing wrong about getting that info from former players of that system.

Given there are three QB's entrenched on the roster, it isn't easy to expect Sloter to be a fourth quarterback on this roster., unless the Bears are going to let him come in and compete with Brey for that third spot. Given the experience, Sloter brings to the table and considers how he has started under his belt, which may not be a bad idea.

Nagy has already expressed numerous times that this season's training camp will be unlike any other he has run in Chicago. This year it will be all about competition, and in the spirit of competition bringing in new players to compete for positions seems likely. Competition often brings out the best in players, and with Sloter now coming in, it could bring out the best in him and Brey and others, they may bring in. That will do a lot for this franchise moving forward.

You also must think about the continually changing COVID-19 situation and what it could mean for the season. While we don't yet know how the NFL will handle positive tests, what would happen if the Bears had multiple quarterbacks come down with a positive test and had to miss a week or more. Chicago would then be scrambling to find help, and the support they need would have to pass quarantine first.

That is why adding Sloter and others is an excellent insurance policy for the season. It gives the Bears someone with experience and another quarterback to learn the system. They could stash him on the practice squad or have him ready all season long should the quarterback room get hit hard due to COVID-19. I would expect more moves like this in the coming weeks leading up to the regular season in four weeks. This is a workout to watch as Sloter does have game.