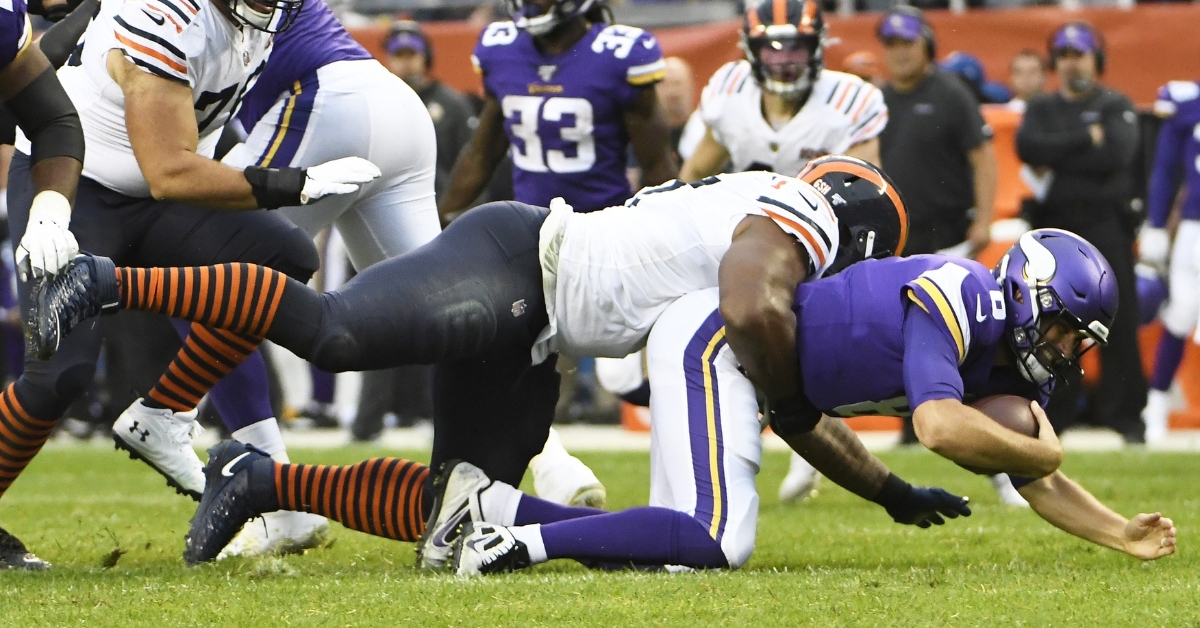 CHICAGO — Despite not having the services of wide receiver Taylor Gabriel, defensive end Akiem Hicks, offensive guard Kyle Long or linebacker Roquan Smith and losing quarterback Mitchell Trubisky to injury in the first quarter, the depleted Chicago Bears (3-1) found a way to defeat the Minnesota Vikings (2-2) at Soldier Field on Sunday. With the exception of Smith, all of the aforementioned Bears who missed Week 4's action were held out due to injury concerns. Smith, on the other hand, was a late scratch because of a personal matter. Even after Trubisky departed the game with a shoulder injury suffered in the first quarter, the Bears went on to win 16-6 in the NFC North defensive struggle.

Trubisky injured his left shoulder in a matchup with the Vikings last year, and it happened again on Sunday. Vikings defensive end Danielle Hunter pulled off a strip sack that resulted in Trubisky landing hard on his left shoulder. The Vikings recovered the fumble, but the turnover was negated by a Minnesota penalty. Trubisky was then evaluated by medical personnel before heading to he locker room. Eventually, Trubisky reappeared on the sideline donning a sling on his left arm. Chase Daniel replaced Trubisky under center and fared well, going 22-of-30 for 195 yards through the air.

The Bears' lone touchdown of the game was scored when Daniel connected with running back Tarik Cohen for a 10-yard touchdown pass to cap off the eventful opening drive, which spanned 14 plays and 7:16 of game time. Midway through the second quarter, Bears cornerback Prince Amukamara forced a fumble by knocking the ball out of Vikings wideout Stefon Diggs' hands soon after Diggs caught it. The play was initially ruled an incomplete pass, but a Bears challenge resulted in the call being overturned, as the Bears recovered the fumble. From there, the Bears marched 72 yards and set up kicker Eddy Pineiro for a 25-yard field goal, which he made as time expired in the first half.

Right off the bat in the third quarter, the Bears forced another turnover, with linebacker Khalil Mack forcing a fumble while sacking Vikings quarterback Kirk Cousins. The second turnover also culminated in Pineiro sending a kick through the uprights, with his 38-yarder putting the Bears up 13-0. Pineiro capped off his perfect 4-for-4 kicking performance, which included an extra point, by drilling a 30-yard field goal to increase the Bears' lead to 16 points at the 3:04 mark of the third quarter. With just under three minutes left to play in the game, Vikings running back Dalvin Cook punched it into the end zone from three yards out. The Vikings failed on the ensuing 2-point conversion and were unable to muster much offense at all on their final two possessions.

With their 16-6 victory in the books, the Bears moved to 3-0 against the Vikings under the direction of Head Coach Matt Nagy. Wide receiver Allen Robinson II was the Bears' leading receiver with 77 yards on seven receptions, and linebacker Nick Kwiatkoski was the Bears' leading tackler with 10 tackles, nine of which were solo. Following the game, it was reported that Trubisky's injury is not expected to be season-ending, but the Bears organization will know more specific details concerning the ailment on Monday. For now, the Bears will assuredly appreciate the win over the rival Vikings and hope for better health in Week 5.