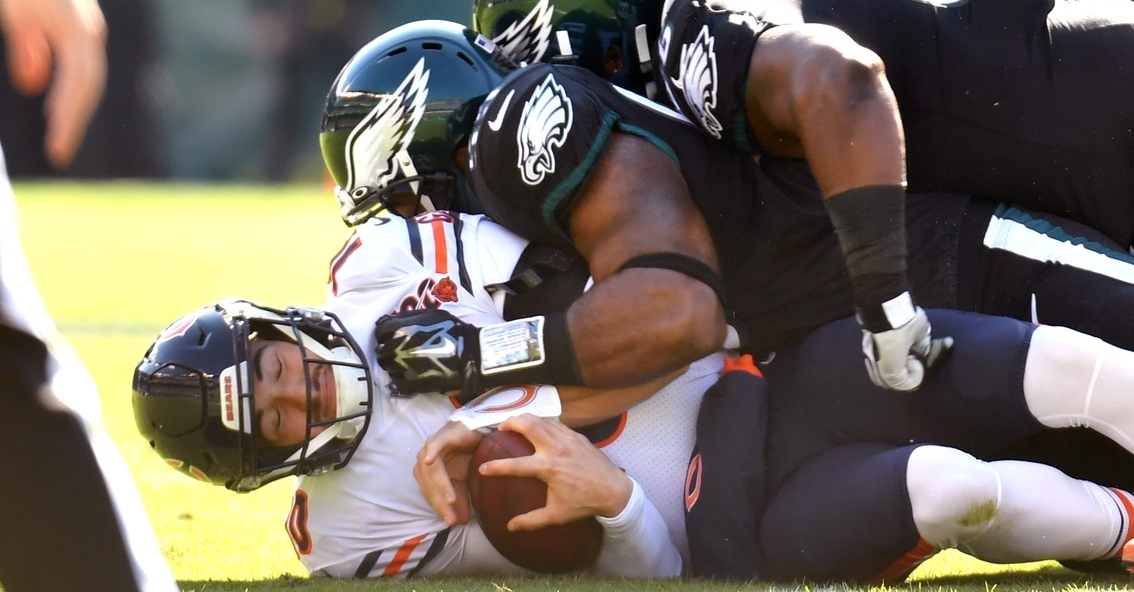 PHILADELPHIA — Losing their fourth straight game, the Chicago Bears (3-5) produced yet another lackluster offensive performance on Sunday. The Bears amassed a measly nine yards of offense in the first half en route to losing 22-14 to the Philadelphia Eagles (5-4) at Lincoln Financial Field. Running back David Montgomery scored two touchdowns on the ground for the Bears, but there were not many other positives pertaining to Chicago's showing in the 22-14 loss. Bears quarterback Mitchell Trubisky struggled to manufacture drives and finished with just 125 yards on 10-for-21 passing, and 53 of those yards came on one pass. The Eagles went up 19-0 in the third quarter and were able to stave the Bears off the rest of the way.

In the first half, the Bears went three and out on all but one of their possessions. Meanwhile, the Eagles took a 12-0 lead into the locker room, with kicker Jake Elliott connecting on a pair of 28-yard field goals and quarterback Carson Wentz hooking up with tight end Zach Ertz for a 25-yard touchdown that was followed by an Elliott miss on the point-after attempt. Former Bears running back Jordan Howard provided the Eagles with a 19-point edge by way of a 13-yard touchdown carry at the 10:37 mark of the third quarter. Trubisky's aforementioned 53-yard completion, which was hauled in by wide receiver Taylor Gabriel, helped set up a 1-yard touchdown run by Montgomery on the next drive.

Montgomery later picked up 30 yards after catching the football downfield. The rookie halfback accrued 40 rushing yards on 14 carries and caught three passes for 36 receiving yards. Scoring from one yard out with 12:43 left to play, Montgomery pulled the Bears to within five points of the Eagles. Philadelphia responded with a 16-play drive that was capped off by a 38-yard field goal from Elliott that increased the Eagles' lead to eight points with 25 seconds remaining. The Bears proceeded to turn the ball over via a muffed kickoff, thus putting the proverbial nail in Chicago's coffin. Getting outgained 373-164 in terms of total offense, the Bears were fortunate to have lost by only eight points. The Eagles held the ball for over twice as long as the Bears and tallied 16 more first downs than them, too.

Safety Eddie Jackson and linebacker Roquan Smith led the Bears' defense with 10 tackles apiece in the 22-14 Week 9 matchup.. Chicago has scored fewer than 20 points in five of its eight contests so far and has consistently suffered offensive lapses from the get-go. Howard totaled 82 rushing yards on 19 carries, and Ertz was the game's leading receiver with 103 yards on nine catches. Wentz went 26-of-39 for 239 yards and showed up Trubisky, whose quarterback rating was a woeful 18.2. Having now lost four games in a row, the Bears need to right the ship as soon as possible in order to avoid dropping out of the playoff picture in a season that began with Super Bowl aspirations.