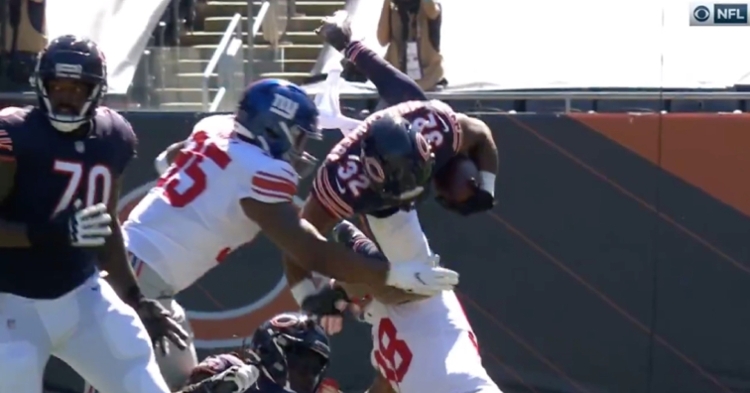 Bears running back David Montgomery's helmet collided with the ground after getting tripped up on a hurdle attempt.

CHICAGO — Chicago Bears running back David Montgomery scored the Bears' first touchdown of the game on Sunday, putting Chicago up 7-0 on the New York Giants with a 28-yard touchdown reception. Unfortunately, Montgomery left the Week 2 matchup early in the second quarter with a neck injury.

After hurdling a defender and getting tripped up while doing so, Montgomery collided with the Soldier Field grass, resulting in a neck injury. Trainers came onto the field and evaluated Montgomery, who was slow to get up. The second-year running back was subsequently removed from the game and taken into the medical tent on the sideline. Soon afterward, the Bears announced that Montgomery was questionable to return.

Bears announce that running back David Montgomery is questionable to return with a neck injury.