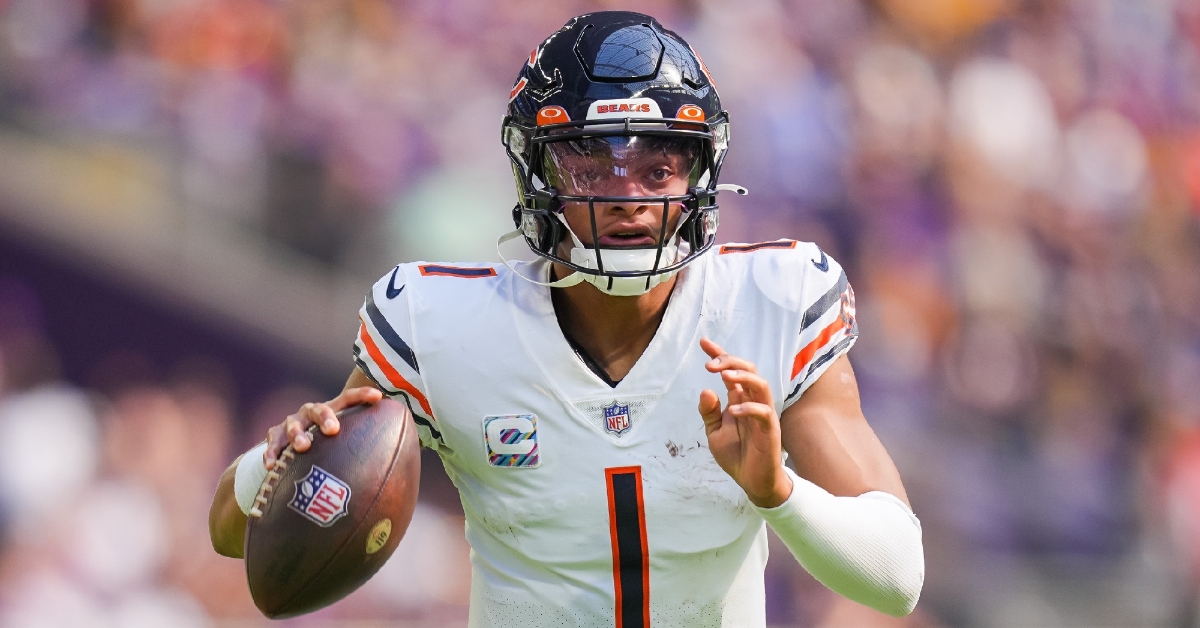 MINNESOTA - Through four weeks of the NFL season, the Chicago Bears (2-3) have yet to find their stride as a team. Despite that, they entered Sunday's game at the US Bank Stadium, one game behind the Division Leading Minnesota Vikings(4-1).

In what was a swing game, the Bears had an opportunity to pull even in the standings with a win, or fall two games back with a loss, technically three if you count the tie-breaker. Chicago couldn't have asked for a worse start in this one, as they fell behind the Vikings 21-3 and looked completely lost on the field.

That was until a costly mistake by the Vikings left the door open as the Bears not only scored before the half, but used 19 unanswered points to take a 22-21 lead. However, the Minnesota Vikings put together a 17-play drive late in the third that resulted in a go-ahead score while Cam Dantzler ripped the ball away from Ihmir Smith-Marssette as the Vikings held off the late Bears rally 29-22.

To beat the Vikings, you must take their big dog Justin Jefferson out of the game. That is much easier said than done as the WR torched the Bears for seven first-quarter catches and 10 first-half catches as Chicago had no answers for him. Add in Kirk Cousins starting the game 17-17, and the Vikings offense was humming against this Bears defense.

Minnesota made their presence felt on their opening possession, going 85 yards on 12 plays while taking nearly half the quarter to do it. Jefferson played a massive role with four receptions, but other guys like KJ Osborne and Adam Thielen were also getting involved. Seeing Dalvin Cook picking up large chunks of yards was also an issue, as he capped off that drive with a one-yard score.

For the most part, the Bears defense has played well all season, but their offense has been the problem. With the help of a 30-yard completion to open the game by David Montgomery, that offense started to show signs of life, only to have that drive stall out for the Cairo Santos field goal. Take that away, and it was all Vikings for the majority of the first half.

Not only did the Vikings use a massive drive to take the lead, but their second drive of the game saw the Vikings go 75 more yards on 11 plays. Jefferson and company were again the catalysts for moving the ball, but Alexander Mattison was starting to get going. With the ball inside the 10-yard line, Cook finished things off for the second straight drive as the Vikings were in front 14-3.

Following a quick punt by the Bears offense, the Vikings made it three for three in terms of touchdown drives as a short one-yard touch pass led to Jalen Reagor getting his first score as a Viking and a 21-3 lead. At this stage in the game, the Bears could have packed it in as a blowout was near, but that is not in this team's makeup, and all it takes is a mistake to open the door.

That mistake came from a rookie punter whose five-yard punt late in the first half led to the Bears having excellent field position. One play later saw Justin Fields hook up with Darnell Mooney, who possibly had the catch of the year to move the ball inside the 10. Fields was finally allowed to get things going in the passing game as he topped the 200-yard mark for the first time all season. Montgomery capped off that drive with a nine-yard score as the Bears pulled within 21-10.

The Vikings special teams continued to let them down as Greg Joseph missed a 53-yarder heading into the half to keep things 21-10. Not only did the Bears late TD seem to awaken them, but they got the ball to start the second half and continued to push the ball downfield. Equanimeous St. Brown had an excellent reception over the middle, with Cole Kmet getting involved for a 23-yard strike. A few running plays later saw the ball move inside the 10 while Velus Jones Jr had his first career reception end up in a nine-yard score to pull the Bears within 21-16. Chicago would miss the 2-pt conversion, but things were starting to get tight.

With momentum starting to tilt in the Bears favor, Chicago tried to catch the Vikings off guard with an onside kick only to have Minnesota recover. However, the Bears defense held tough to force another field goal as they blocked that attempt to keep things 21-16. Despite needing 11 plays to move the ball 34 yards, the Bears took six minutes off the clock while another Santos field goal pulled the Bears to within 21-19.

Chicago had to love their position, as you could see the Vikings starting to panic. That resulted in another costly mistake as Kindle Vildor intercepted Cousins over the middle to kill another drive and set the Bears up with excellent field position.

Hoping to capitalize on the short field, Fields ripped off an incredible 52-yard scramble that looked like a go-ahead score. However, Smith-Marssette picked up a costly block in the back penalty that killed that TD, but saw the Bears gain some yards. Fields would pick up a first down on the next play, but the Bears stalled out in the end, but all was not a waste, with Santos putting through a 51-yard score to give the Bears the lead 22-21.

This was the turning point in the game as the Vikings received the ball with nine minutes to go and had no intentions of giving it back. Not only was Cousins starting to get the passing game going with Irv Smith Jr getting involved, but the legs of Cook started to churn out huge gains as the Bears were starting to get tired on the defensive end.

A few more clutch completions to Jefferson and Thielen helped the Vikings get the ball inside the red zone, where the running game took over. Facing a third and goal from the one, Cousins took it upon himself to give the Vikings the lead as his one-yard scamper put Minnesota on top for good, 27-22. Cousins would find Jefferson for the Two-point conversion and put them up seven with two minutes to go.

Needing a touchdown to tie things up, the Bears were put in a challenging position only to see Montgomery move the chains with two consecutive completions. Following a near disaster of a play with Zadarious Smith knocking the ball free, Montgomery made up for that with another reception, taking it 21 yards into Vikings territory for another first down.

As bad as the Vikings defense has played at times, they deserve a ton of credit as they have had that bend, but not break mentality. After allowing another first down completion to Smith-Marsette, the Vikings made things happen with Dantzler ripping the ball away from the former Viking to seal the deal as Minnesota escaped disaster 29-22.

The loss now moves the Bears to 2-3, but also 0-3 away from Soldier Field as they still have yet to win on the road. Fields completed a season-high 15 passes on 21 attempts for 208 yards and showed plenty of potential. He also led the team with 47 yards rushing and would have had close to 100 had that TD stood.

Despite picking up 20 yards rushing on 12 carries, Montgomery made up for it in the passing game as he led the team with 62 yards receiving. Mooney picked up 52, with Kmet having a season-best 45 yards.