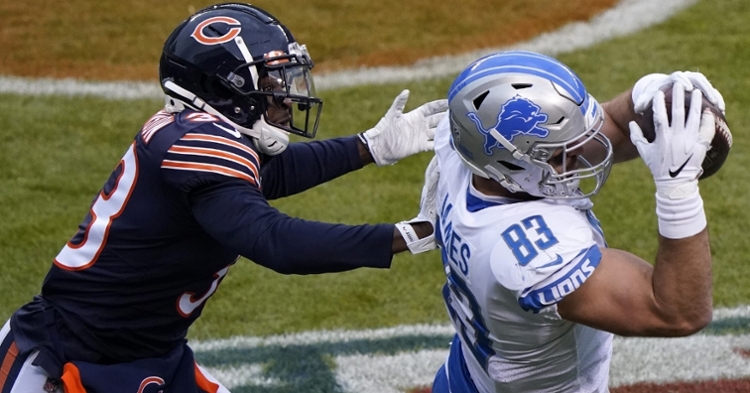 Seen here as a member of the Lions, tight end Jesse James is entering his seventh season in the NFL. (Credit: Mike Dinovo-USA TODAY Sports)

CHICAGO — The Chicago Bears continue to make adjustments to their pass-catching unit, as they signed veteran tight end Jesse James, 27, to a contract just one day after trading wide receiver Anthony Miller to the Houston Texans. James was a fifth-round draft pick out of Penn State in 2015 and previously played for the Pittsburgh Steelers from 2015-18 and Detroit Lions from 2019-20. A durable player, Miller has not missed a game since his rookie campaign.

James was released by the Lions on March 12 and remained a free agent until Sunday, when the Bears inked him to a one-year deal, which NFL Network's Mike Garafolo reported. With training camp right around the corner, there are now seven tight ends on the Bears' roster, including key playmakers Jimmy Graham and Cole Kmet. Therefore, James, who started 10 games and caught 16 passes for 129 yards and two touchdowns last season, might have his work cut out for him in terms of making the 53-man roster.