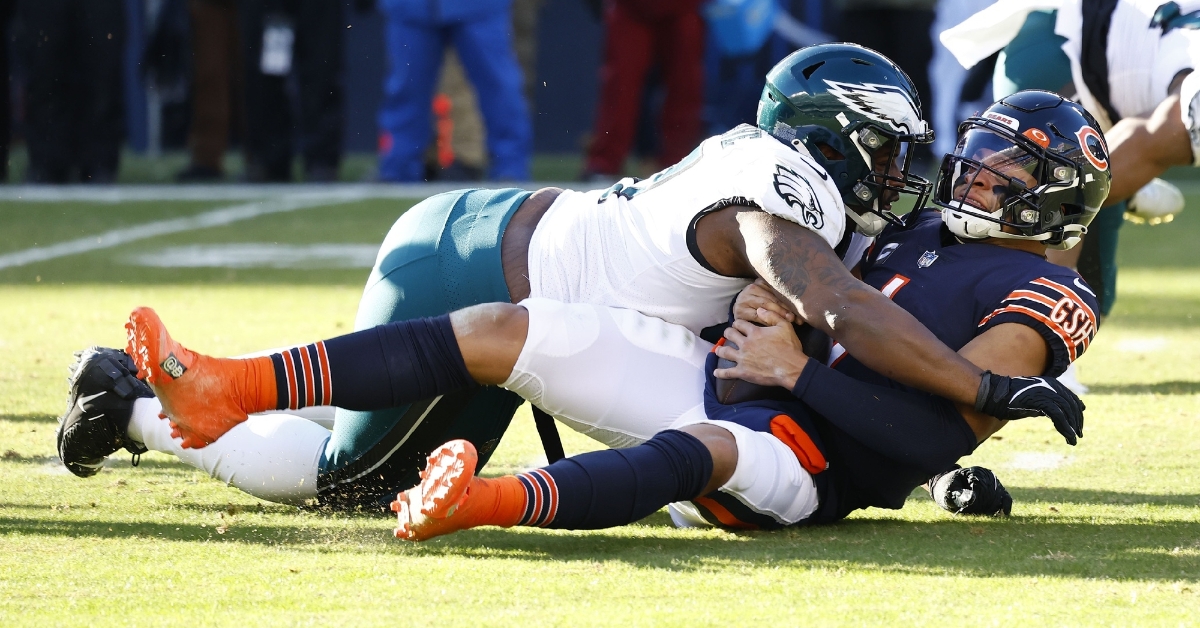 CHICAGO - Coming off their much-needed bye week, the Chicago Bears (3-11) returned to action on Sunday for what is going to be a grueling stretch run. Not only do the Bears have the toughest remaining schedule in the NFL, but that all started with hosting the team with the best record, the Philadelphia Eagles (13-1).

In what seemed like a David vs. Goliath matchup on paper, you have to give the Bears a ton of credit for the effort they put forth as they were in yet another one score game. Record aside, this team has been in a ton of those this season, and if you flip their record around in the one-score games they have been a part of, they would be 9-5 and a playoff team.

However, you are what your record says you are, and the Bears gave the Eagles everything they could handle and more, only to fall 25-20 in the end. This is one of those losses that a team can look back on and use as a character-building game, as this team may be closer to contending than most think.

It was the Justin Fields show again for the Chicago Bears as he led the way with 95 yards rushing on 15 carries while completing 14 of his 21 passes for 152 yards and two TDs.

He is just 207 yards short of breaking the all-time NFL single-season rushing record for a quarterback.

Most importantly, Fields was turnover-free as he didn't throw an interception, while his counterpart and MVP front-runner Jalen Hurts had two.

However, Hurts made up for those two blunders as he threw for 315 yards while also leading his team in rushing with 61 yards on 17 carries. It was on the ground where Hurts did the most damage as he picked up three rushing touchdowns to single-handedly outscore the Bears.

The first of his three touchdowns came in the second quarter, as both teams were held scoreless in the first. Chicago had a chance early on, but they turned it over on downs on their opening possession before a series of punts brought things into the second quarter.

It took the Eagles a bit to get rolling, but after putting a nine-play, 67-yard drive together, Jake Elliott opened the scoring with a 32-yard field goal to try to make things 3-0. Chicago took it upon themselves on their next possession to respond, as they needed nine plays and five minutes off the clock to get on the board.

Fields used his legs to get the drive started before finding David Montgomery for a huge completion to move the ball into Eagles territory. Another big run from Fields moved the ball inside the 10-yard line before Montgomery finished things off from nine yards out. Cairo Santos missed the extra point, but the Bears still held a 6-3 lead.

Chicago continued to hold their own late in the second quarter when Hurts was picked off for the second time in the half, with this one coming from DeAndre Houston-Carson. Unfortunately, the Bears were unable to capitalize off that interception and punted it away only to down the ball inside the 10. With Miles Sanders and the running game starting to get going, the Eagles put together a nine-play 91-yard drive to cap off the first half, with Hurts running it in from 22 yards out to give the Eagles a 10-6 lead at the half.

The second half couldn't have started better for the Eagles and worse for the Bears, with Boston Scott opening the half with a long kick return into Bears territory. Six plays later, it was Hurts finding the endzone again after a 29-yard hook-up to AJ Brown, moved the ball inside the five before he took it himself for two yards.

Although down by 11 at this point, the Chicago defense continued to create problems for the Eagles offense as they forced their third turnover of the game, with this coming via the fumble. It was the rookie Kyler Gordon making the play as he forced the fumble and recovered it inside the 20. Three plays later saw Fields hook up with Montgomery as the Bears pulled within 17-13.

That would not only be the closest Chicago would get, but the final points for a while as sloppy play saw the Bears fumble the football, the Eagles turn it over on downs, and even saw Elliott miss a 39-yard field goal try. Still holding a slim 17-13 lead, Philadelphia was looking to put the game away in the fourth quarter.

As all good teams do, they managed to do that, going 75 yards on six plays and needing less than three minutes to do it. A 68-yard connection to Brown certainly makes that easier, as he finished with 181 yards receiving on nine catches. That set things up for Hurts not only to complete the drive with another TD, but also to convert on the 2pt try to extend the lead to 25-13.

Looking to answer, Chicago put together another scoring drive that went about as quickly and as good as possible. In total, the Bears offense moved the ball 60 yards on six plays, with Fields using his arm for most of it. That included his 35-yard hook up to Byron Pringle to pull the Bears within 25-20, but the Eagles ran out the clock on their next possession to preserve the win.

This was another painful loss for this Bears team, but there was a lot of good to take away from it. Pringle was the leading WR with 39 yards and a score, Montgomery picked up 53 yards to go with Fields 95, and most importantly, the defense played an excellent game against a fantastic offense.