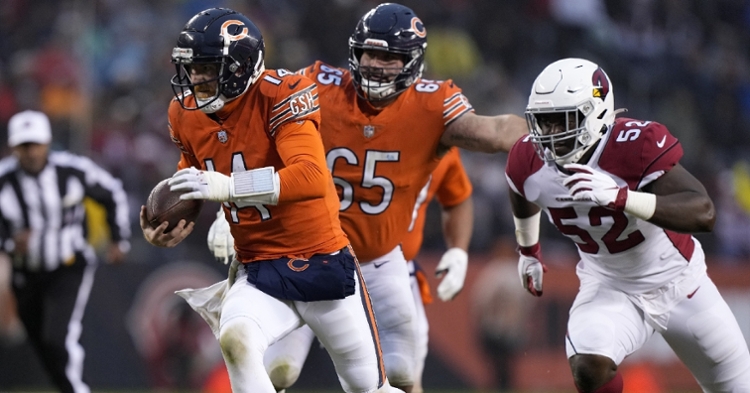 CHICAGO – With a chance to score a massive win and potentially move up in the NFC standings, the Chicago Bears (4-8) welcomed in the Arizona Cardinals (10-2), owners of the top spot in the NFC. Chicago has been a home away from home for the Cardinals in recent years, as their last two trips to Soldier Field resulted in dominating wins where the Cardinals scored more than 40 points in each of those wins.

Fresh off a bye week and healthy on the offensive side of the ball for the first time in a month, this had the makings of another laugher of a game as the Cardinals were looking to strengthen their grip on the NFC. Ironically, the Chicago Bears hung with the Cardinals offensively, as they outgained the Cardinals by nearly 60 yards on the day. The big difference was the defense, as four Andy Dalton interceptions proved too much as the Cardinals picked up another win in Chicago 33-22.

Knowing they needed to play a near-perfect game if they wanted to top Arizona, Dalton put the Bears in a big hole three plays into the game as his first pass attempt was intercepted. With a short field following that interception, the Cardinals moved backward until Kyler Murray found Zach Ertz for 10 yards to bring up a fourth and short. Instead of taking the field goal, Kliff Kingsbury elected to go for it, and it paid off as Murray found DeAndre Hopkins for 20 yards and an early 7-0 lead.

Interceptions were the theme of the game, especially early on, as Dalton was looking to give the game away early. With David Montgomery doing practically everything on the Bears next possession, Chicago started to move the ball well as they reached Arizona territory. With the ball on the Cardinals 20-yard line, Dalton was looking for Cole Kmet and saw Budda Baker come down with the interception as he raced back the other way for 77 yards setting the Cardinals offense up with terrific field position. Five plays later, Murray found the endzone again, this time with his legs as his nine-yard scamper gave the Cardinals a 14-0 lead.

In desperate need of points, Dalton and the offense were back on the field and put together a great drive that took the rest of the first quarter and into the second. Sure the running game of Montgomery played a significant role, but he was also making things happen in the passing game as the Bears were moving again. Looking to finish things off in a positive manner this time around, Montgomery capped off a 13-play 77-yard drive with a one-yard touchdown to put the Bears on the board, trailing 14-7.

Looking to put together their first big drive of the half, the Cardinals wasted no time responding from that Bears touchdown as they drove down the field themselves needing just seven plays to do so. A couple of nice runs from James Connor opened up the passing game where Murray found Rondalle Moore to move the sticks. After a third and short, Murray went back to the air, but Conner made the play as he hauled in a short pass and took it 23 yards to extend the lead to 21-7. That is where things stood at the half as three straight punts concluded the first half.

Not only did Arizona own a 14-point lead, but they started the second half with the football and wasted no time adding to it. With a mix of Murray using his legs to make plays and showcasing a short and efficient passing game, the Cardinals were in rhythm as they quickly moved the ball into Bears territory. The Bears defense did a great job of holding them later in the drive, but Matt Prater was still able to knock home a 33-yard field to put the Cardinals in front 24-7.

Take away those two early interceptions, and Dalton did an excellent job bouncing back. That continued with the Bears first possession of the second half as they were on the move again. David Montgomery continued to be a factor in the passing and rushing game, as did Jakeem Grant in the receiving game, coming down with several big catches. Montgomery continued to shoulder the load on offense as he looked to have his second TD of the game only to have a penalty nullify it. Have no fear, Dalton found Jimmy Graham a few plays later from one-yard out as the Bears were within 24-14.

Following a Cardinals punt, the Bears had a golden opportunity to pull within one score as they were starting to figure things out on offense as Dalton found Darnell Mooney to move the sticks. Chicago had a great drive going until Dalton was intercepted for the third time, which saw the Cardinals return the pick to the 28. Outside of a 14-yard strike to A.J. Green, the Bears made the Cardinals offense work as they traveled 21 yards on seven plays as Prater knocked home a 33-yard field to extend the lead to 27-14.

Still, with a chance to make things a one-score game, Dalton went back to the air finding Kmet and Mooney to move the sticks. Following a penalty and an incompletion, Dalton was looking for Montgomery yet again, only to see his pass get intercepted for a fourth time giving the Cardinals the short field once again. Two plays later, both Murray runs, and you had a 33-14 game as Murray picked up his fourth TD of the game, second on the ground.

Trailing by three scores with less than seven minutes to play, the Bears didn't have a ton of time left, but refused to go down without a fight. In less than four minutes, not only did the Bears run 12 plays, but they went 75 yards as the offense continued to play well at times. It would be nice if some of these drives didn't take so many plays, but Dalton found Kmet for 24 yards for the big play on the drive.

After dodging a bullet and recovering their fumble, Dalton found Damiere Byrd for 19 yards as the Bears were inside the 15-yard line. Three plays later, Grant hauled in his first touchdown reception for eight yards out as the Bears cut the lead to 34-20 before making things 34-22 on the two-point try. Unfortunately for them, that would be as close as things would get as Chicago didn't have enough time left to mount any sort of a comeback and fell to 4-8 on the season.

Even with the four interceptions, Dalton still completed 26-41 passes for 229 yards with two touchdowns. 62 of those yards went to Grant, who had a surprisingly good game to lead all Chicago receivers. Montgomery added 51 yards in receiving to go with his 90 yards on the ground as he continues to play great football this season.

The numbers are not that impressive for Arizona, but they did what they needed to do to win. Murray went 11-15 through the air for just 123 yards but connected for a pair of touchdown passes. He also added 59 yards on the ground, with two more scores continuing to show how dangerous he can be. Not only did Conner lead the way on the ground with 75 yards, but he also led the team with 51 yards receiving as the Cardinals continue to lead the NFC.