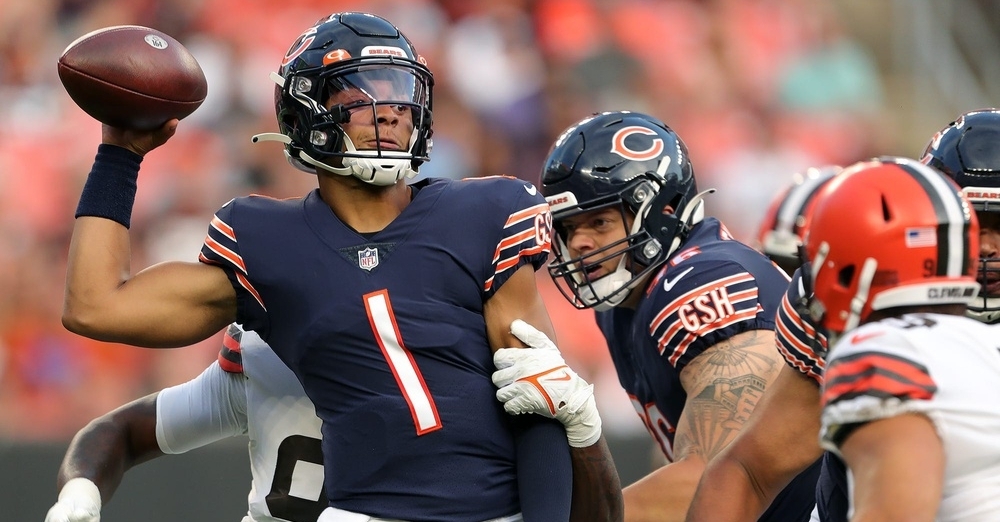 CLEVELAND - It has been a long time since the Bears have had any success, but if the preseason indicates how things will go, it could be a fun season in Chicago. Looking to finish the preseason with an unbeaten mark, the Bears took to the road where they faced off against the Cleveland Browns.

This was the telling game of the preseason as Bears fans got to witness what could be with Justin Fields this season. He was nearly perfect, which is an understatement, as he went 14-16 passing for 156 yards and three scores. Those scores would be all the Bears offense in the game as they managed to hold on late for the 21-20 win.

I understand this is just the preseason, but Fields had to be excited about how he played. After all, his first career start was against this team last season, and they made life a living nightmare for him. This was the opposite, as Fields was on fire early and often can carry that on throughout the game.

Take the Bears first scoring drive, for example, that covered 80 yards and lasted seven plays, as David Montgomery had a couple of nice runs to set up the pasing game. On that drive, Fields went a perfect 5-5, including his 22-yard touchdown to Ryan Griffin to put the Bears in front 7-0.

Jacoby Brissett and the Browns offense tried to answer by going with the short passing game to move the chains, only to miss a 58-yard field goal to give the ball back to Fields. In a drive that spanned 52 yards and took part of the first and second quarters, Fields continued to leave his mark as the 18-yard hook up with Equnimious St. Brown moved the ball inside the Browns 40.

Following a couple of Montgomery runs, Fields returned to the air, where he hooked with Dante Pettis for 12 yards and a 14-0 lead. Another big play from David Njoku moved the ball near midfield a few possessions later, but once again, that drive stalled as Brissett was picked off, and the Bears were back on the attack again.

With the ball back in his hands, Fields continued to spread the ball around as Isaiah Coulter and Khalil Herbert were now getting involved in the action. Not only did Cole Kmet come down with a short completion earlier in the drive, but he was on the receiving end of a 24-yard strike to cap off the drive with Field's third touchdown of the first half that saw the Bears lead 21-0.

Despite playing exceptionally well and controlling the half from start to finish, things didn't end well for the Bears as Cleveland picked up a pair of field goals, with one coming off a late fumble to give the Bears a 21-6 lead after one half of play. With plenty of changes across both sides of the ball for Chicago in the second half, things were completely different as the Bears offense went quiet and failed to score.

That meant the Defense had more pressure on them as they wanted to make as many plays as possible to hold the lead. Following three consecutive punts to begin the half, Cleveland put together the best game drive for either side as it took nearly eight minutes and saw the Browns drive better than 85 yards on 19 plays.

The drive took so long that it closed out the third quarter and started the fourth quarter, but that didn't bode well for Cleveland, who was still down big. Cleveland managed to close out that lengthy drive with their first touchdown as Joshua Dobbs found Miller Forristall for the five-yard score, while the two-point try made things 21-14.

Despite Nathan Peterman struggling for most of the second half, he was able to hit Kevin Shea for 34 yards which helped set up a Cairo Santos field goal attempt. One of the most accurate kickers the past two seasons, Santos wanted this one back as he missed the hick wide left, but still had the Bears in front.

That was the last time the Bears would come close to scoring as they fumbled the inside their own 10-yard line late in the game to give the Browns a chance to tie or, at the worst, win it. One play later, it looked like Josh Rosen found his man for the 10-yard score, but after further review, the receiver was marked short. Rosen took care of the rest, plunging in from one yard to close the deficit to 21-20.

Instead of going for the tie with an extra point, Kevin Stefanski kept his offense on the play, only to see his two-point try come up short. Peterman would finish things off from there as his 37-yard run helped run down the clock, and the Bears finished off the preseason with a perfect 3-0 mark.