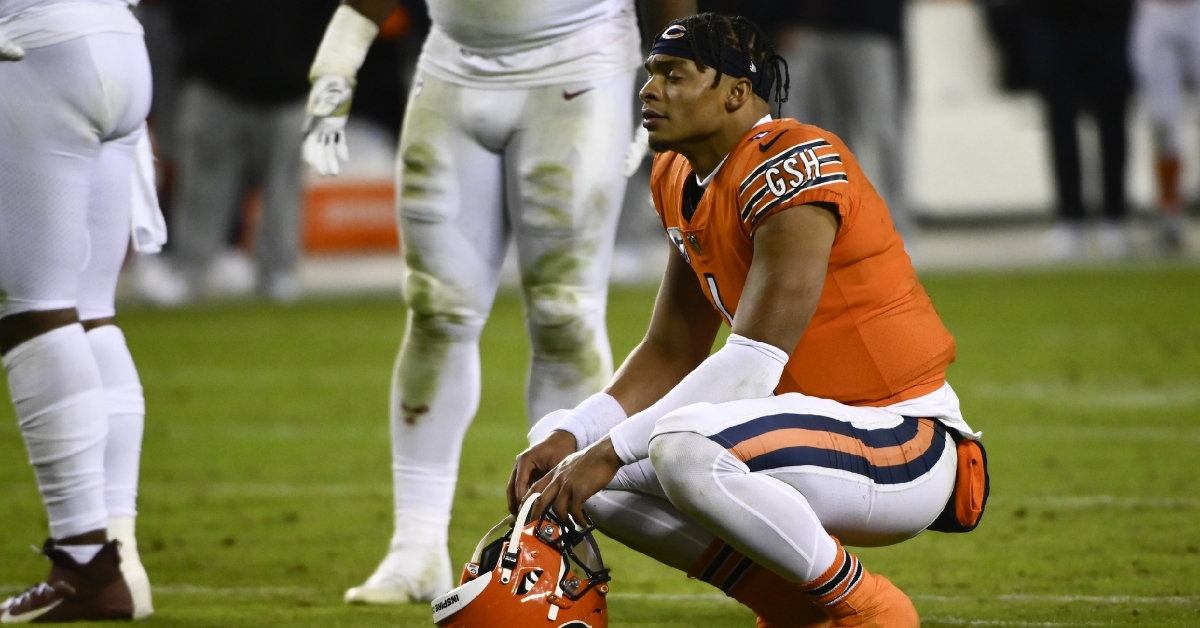 CHICAGO - Football is a game of inches, which is what the Chicago Bears (2-4) found out Thursday night. Facing off with the Washington Commanders (2-4) in front of a sold-out Soldier Field crowd, fans were treated to another lackluster offensive performance that saw the score 3-0 at the half.

That made six straight quarters without a touchdown going back to last week's 12-9 Colts win over the Broncos. The Bears finally ended that streak late in the third, but trailing 12-7 with the game on the line, Chicago had four chances to take the lead from inside the Washington five. Instead, things didn't go the Bears way, including a fourth down completion to Darnell Mooney, who bobbled it on the play and was ruled down short of the goal line. Those inches were the difference in the game as the Commanders held off the Bears 12-7.

Offensive performances like this continue to frustrate the fans as Luke Getsy is starting to take a ton of criticism outside the organization. The first-year offensive coordinator has struggled to find a rhythm, especially in the passing game, with Justin Fields going 14-27 for 190 yards. He did throw a touchdown, but also had an interception, as that makes five games out of the Bears six where he has passed for under 200 yards.

His counterpart Carson Wentz was surprisingly worse and way worse when you look at his final line. Granted, he completed 12 of his 22 passes, but most were minimal gains at best as he finished with just 99 yards passing, but he did improve to 7-0 all-time on Thursday night.

If you thought the Broncos and Colts game in week five was ugly, this was way worse, especially in the first half. Neither team could get much of anything going offensively, and when things were going great costly miscues killed drives. Take the Bears second drive of the game, for example.

After going 11 plays and 61 yards, Chicago had the ball inside the Washington 10 and was in a prime position to score. That was until Fields threw an interception, and the Bears came away with nothing. Give the Chicago defense a ton of credit, though, as they played lights out against the Washington offense and gave them next to nothing for most of the game.

Across the next six possessions, the teams combined for five punts and one turnover on downs. Unfortunately, that turnover on Downs came from the Bears as they wasted another opportunity inside the five-yard line. Khalil Herbert put the Bears in position with a 64-yard run to open things up, but Getsy and the offense stalled after that to keep things scoreless.

With the momentum on their side following another huge stop, Washington put together their best drive of the game up to this point, needing less than two minutes to go 57 yards. The Bears defense did help them out, as a pair of costly pass interference calls gave the Commanders nearly 35 yards of Field position. Add in a 16-yard run from JD McKissic, and the Commanders were set up in the red zone, where Joey Slye drilled a 38-yard field goal for the 3-0 halftime lead.

With points finally on the board, things began to open up more in the third quarter. Credit that to the Bears offense. Yes, I said the Bears offense, as they used a season-best 94-yard drive to take the lead and did that in less than four minutes. A lot of the early ball movement came from David Montgomery as he was doing what he had to move the chains.

Add in a 21-yard strike to Mooney, and the Bears offense was moving into Washington territory. Fields continued to go with his arm a few plays later as he hooked up with Dante Pettis for the 40-yard strike to put Chicago in front 7-3. Given how the Washington offense looked up to this point, seven points seemed like enough, but of course, the Bears wanted more.

Looking to respond after giving up the lead, Washington put together a very impressive drive that covered 65 yards on 13 plays and took nearly half the quarter to complete. Wentz played a sizable role early on with a series of short passes to Antonio Gibson and Terry McLaurin to keep the chains moving.

Once that happened, the running game started to get involved, but it still wasn't enough to find the endzone, with Slye knocking home a second field goal to pull Washington within 7-6. It was after the Commanders next possession when the momentum shifted as they were forced to punt after a quick three and out.

With Velus Jones awaiting the kick, the rookie fumbled his second punt in three weeks at the 9-yard line, and Washington took over from there. Two runs from rookie Brian Robinson and the Commanders were in front 12-7 as he plowed in from one yard out for the score. Washington went for two after that play and came away empty, but Chicago needed a touchdown to retake the lead.

Across the Bears final two possessions, it was about missed opportunities as they turned the ball over on downs twice. The first one came on a 10-play, 27-yard drive where Fields was unable to hook up Ihmir Smith-Marsette on fourth down, giving things back to Washington with good field position.

Fortunately for the Bears, they were able to dodge a huge bullet as Slye missed his field goal attempt that kept the Commanders in front 12-7. The next play saw Fields fumble the snap only to recover as the Bears avoided major disaster.

A first down run from Montgomery followed that before Fields showed off the wheels and raced 39 yards to the Commanders five-yard line. With a first-and-goal situation and 52 seconds to go, you had to like the Bears chances of getting five yards. Instead, three plays later, the team moved the ball one yard and faced a fourth-and-goal situation with the game on the line.

There is no way this game should have come down to that play, but it did, and the Bears missed another opportunity because of it as Mooney bobbled a fourth down pass before being tackled inches short of the goalline, and Chicago turned the ball over on downs. That was the difference in the game as the Bears let another fourth-quarter lead get away 12-7.

Although Fields may be struggling in the passing game, his legs work just fine as he led the team in rushing for the second straight week and finished with 88 yards. Herbert added 75 yards on seven carries, with Montgomery picking up 67 as the Bears rushed for 238 yards as a team. Pettis put together his best game of the season, coming away with four catches for 84 yards and a score.