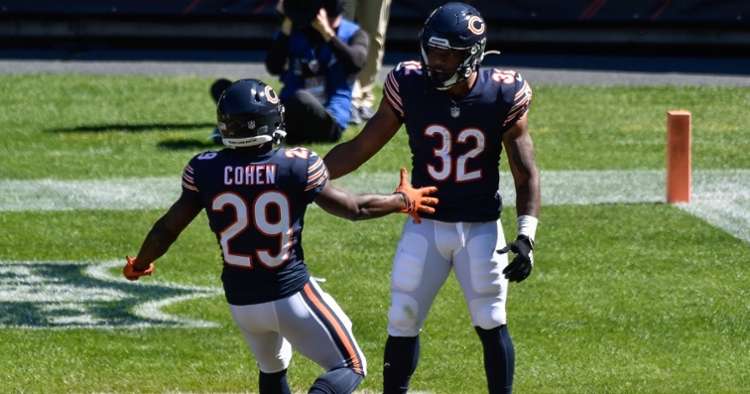 Defeating the New York Giants (0-2) 17-13 at an empty Soldier Field on Sunday, the Bears held on for the win after the Giants marched to the Chicago 10-yard line prior to an incomplete pass on the game's last play. Chicago scored all 17 points in the first half before cooling off after halftime. The Bears and the Giants suffered two turnovers apiece in the defensive battle.

Bears, touchdown: In stark contrast to Week 1, when the Bears failed to reach the end zone until the fourth quarter, the Bears began their Week 2 matchup with a touchdown drive. Early on, Mitchell Trubisky and Allen Robinson hooked up for a 17-yard pass play over the middle. Screen plays proved effective for the Bears on the afternoon, including a 15-yard gain by Tarik Cohen on the opening drive. Their first time with the ball, the Bears converted four third downs, including a 28-yard screen pass to David Montgomery that was taken to the house. Montgomery found room to run after making the catch and dashed for the end zone.

Giants, fumble: On the Giants' third play from scrimmage, Chicago pulled off a strip sack of Daniel Jones. Robert Quinn forced the fumble, and Khalil Mack scooped it up at the New York 20-yard line.

Bears, field goal: After beginning their second possession in the red zone, the Bears settled for a 34-yard field goal that Cairo Santos sent through the uprights.

Giants, interception: On the first play of the second quarter, Saquon Barkley exited the game with a knee injury and did not return. Deon Bush put an end to a promising Giants drive by picking off a pass intended for Evan Engram and returning it to the Chicago 34.

Saquon Barkley goes down with what looks to be a serious right knee injury pic.twitter.com/eSIjIHlRVx

.@deonbushlive2 & the defense showed up ready to EAT!

Bears, punt: In the wake of the Barkley injury, the Bears were forced to go without Montgomery due to a neck injury after he had his feet cut out from under him on a short carry, causing him to collide headfirst with the ground. Montgomery was able to return to the action at the beginning of the second half.

Giants, punt: Sterling Shepard caught a pass on this drive. The Giants wideout later left the game with a toe injury and did not return.

Bears, touchdown: Robinson tabbed a 14-yard reception on the first play of the possession. A pair of rookie pass catcher were instrumental on the touchdown drive, too. Rookie tight end Cole Kmet hauled in the first catch of his career on a 12-yard gain. First-year wideout Darnell Mooney snagged a couple of passes on the possession, as well, including a leaping 15-yard touchdown catch in the end zone.

Giants, punt: With the Giants near midfield, Akiem Hicks came up with a third-down sack of Jones.

Another week, another sack for @The_Dream99! ??

Bears, interception: After lighting up the New York secondary for most of the first half, Trubisky struggled in the second half. On his first pass out of halftime, Trubisky was picked off by Julian Love, who returned it to the Chicago 25.

Bradberry tips it to Love for the pick!

Giants, field goal: The Giants settled for a 39-yard field goal from Gano.

Bears, punt: Mooney coughed up the football after making a catch but was able to recover it. Anthony Miller struggled on the day, letting multiple passes go through his hands, and he was unable to corral a third-down catch in Giants territory.

Giants, touchdown: With the longest drive of the day, the Giants traveled 95 yards to the Bears' end zone. Dion Lewis, who replaced Barkley, caught an 11-yard pass out of the backfield and was tackled by Buster Skrine. Skrine was shaken up on the play and headed to the sideline. Jones scrambled for 12 yards, and an unnecessary roughness call on Roquan Smith, who hit Jones while he was sliding, tacked on 15 yards. The possession carried into the fourth quarter, when the Giants opted to go for it on fourth down at the 1-yard line. The decision paid off, as Lewis punched it in for six.

Dion Lewis punches it in!

Bears, interception: In the process of Robinson making a catch near the sideline, James Bradberry ripped the football away from him for an interception.

Giants, field goal: Eddie Jackson had a pick-six called back because he was flagged for pass interference. Given new life on the drive, the Giants eventually settled for a 37-yarder from Gano.

Bears, missed field goal: Montgomery reeled off carries of 11 and 10 yards, respectively, to start the drive. Trubisky scrambled up the sideline for 12 yards, and, on the next play, a nine-yard Montgomery run was nullified by a chop block called on the Bears. Montgomery made up for it with a 23-yard rush on first-and-25. On fourth-and-2, with the ball at New York 36, the Bears kept the offense on the field. A wacky fourth-down conversion ensued, with offensive tackle Bobby Massie catching a deflected pass and moving the chains. On the next fourth down, Chicago chose to send Santos out for a 50-yarder, which he kicked wide left.

Giants, end of game: The Giants started the game-ending drive at their own 40, and a 22-yard hookup between Jones and Engram advanced New York to the Chicago 38. With under a minute to play and the Giants facing a fourth-and-4, Jones threw a six-yard pass to Lewis that kept the G-Men alive. With no timeouts to work with, the Giants eventually stood at the 10-yard line with four seconds remaining. Jones' pass to Golden Tate in the end zone was incomplete, but a flag was thrown. The Bears were relieved to hear offensive pass interference called on Tate, thus ending the game and providing the Monsters of Midway with a hard-fought victory in their home opener.

Up Next: In Week 3, the Bears will head to Atlanta for a matchup at Mercedes-Benz Stadium against the Atlanta Falcons (0-2). Kickoff is set for noon CDT on Sunday, Sept. 27. There is a chance for rain on the warm afternoon in A-Town, so the stadium's retractable roof might be closed. Chicago leads the all-time series versus Atlanta 14-13 but lost 23-17 when the two last met in 2017.