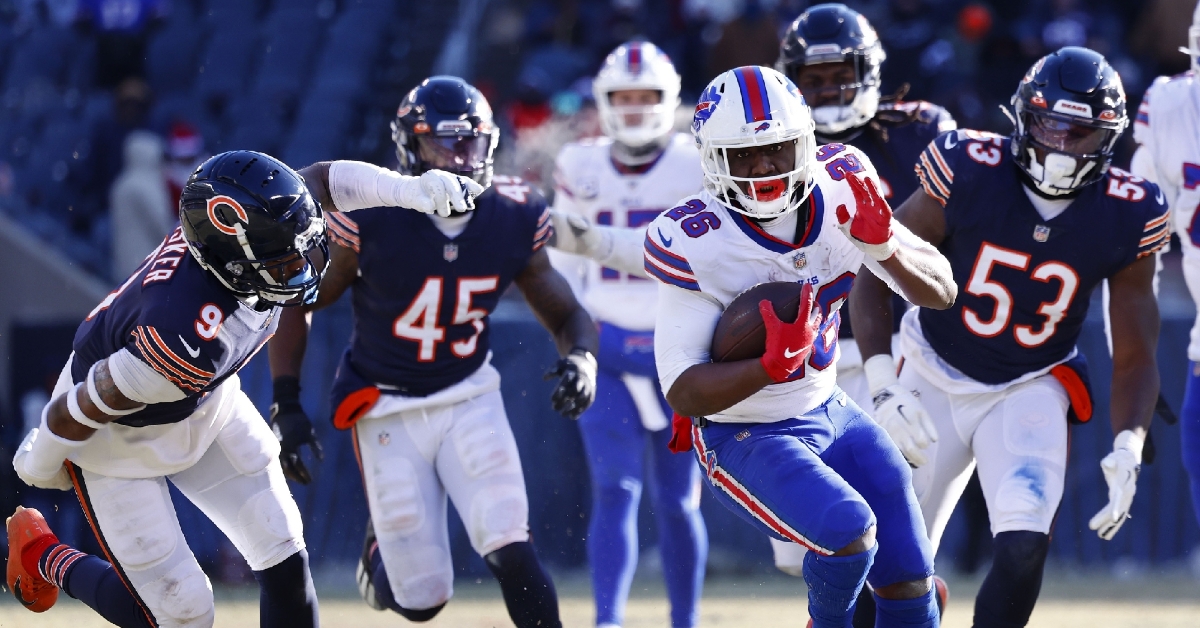 CHICAGO - Coming into week 16, the Chicago Bears (3-12) have already been eliminated from playoff contention, currently have a top five pick in the NFL draft, and still have a difficult schedule to play. That continued with the top seed in the AFC, the Buffalo Bills (12-3), coming to town for a frigid afternoon at Soldier Field.

On paper, this was a classic David vs. Goliath type of matchup, as the records speak for themselves as to where these teams are going this season. However, if this NFL season has taught us anything, expect the unexpected. The Bears nearly came through with a massive upset against the Eagles last week, and through one half on Saturday, it looked the like the Bears were game again.

That was until a massive second half saw the Bills put up 29 points to pull away for the 35-13 win. For all the talk about the Bills not being a great running team, they took a page out of the Bears playbook and rushed for a season high 254 yards on just 31 carries. Compared to Chicago and their 80 yards on 29 carries, this game was won in the trenches.

The Bears defense was up to the task in the passing game for the second straight week as they held another MVP candidate in check. After intercepting Jalen Hurts three times last week, the Bears held Josh Allen to 172 yards passing while picking him off twice. He did throw two touchdowns, but the Bears have intercepted five passes the past two weeks as their defense has started to show up.

It has been a while since someone could say they kept Justin Fields in check, but after holding him to just 119 passing and 11 yards rushing, the Bills did more than hold their own against him. That wasn't the case early on, as Fields led the offense right down the field on their opening possession, hooking up with Byron Pringle for a big completion.

That completion was followed up by a 28-yard David Montgomery run, who led the way for Chicago with 62 yards. Chicago didn't make it easy for themselves, as they lost yardage on their next few plays before Fields hooked up with Dante Pettis from six yards for the 7-0 Bears lead.

Buffalo would answer on their first offensive possession as Allen went up top to Dawson Knox for a huge completion on the first play. Allen continued to make things happen for the Bills on the ground and through the air before James Cook ripped a big run to move the ball deep into Bears territory. Allen finished things off from there as he found Gabe Davis for the 19-yard strike to make things 7-6.

Despite Velus Jones having another great kick return to set the offense up again, nothing came from it as the Bears turned the ball over on downs. Looking to capitalize on that turnover, Allen looked for Isiah McKenzie in the endzone, only to have Kyler Gordon come down with the interception. Neither team could get much of anything going the rest of the way apart from a Cairo Santos 37-yarder that put the Bears up 10-7 at the half. Tyler Bass had a chance to tie things up, but he missed his field goal attempt late in the half.

The second half was a different story, and the half couldn't have gotten off to a worst start for Chicago. Not only did the Bears fumble the ball on their first possession of the half, but Buffalo went right down the field on their opening possession, starting with a first-down completion to Stephon Diggs.

Devin Singletary had a massive showing on the ground as he surpassed the century mark and ripped off a 33-yard run to put the Bills in front for good 12-10. Buffalo picked up their two-point try to extend the lead to 14-10. Following the Bills' fumble recovery, they needed three plays to find the end zone again, with Cook picking up a 27-yard TD run to extend the lead to 21-10.

Those were the final points for quite some time as the next six possessions resulted in punts or turnovers, including the second interception from Allen in the game, with Nicholas Morrow coming down with that. Four plays later saw the Bears move the ball just one yard, but Santos did connect for the 35-yard try to cut the deficit to 21-13.

The rest of the fourth quarter belonged to the Buffalo Bills, who punted the ball away one more time before coming away with two touchdowns on their final two possessions. A long Singletary run set up the first one before Allen finished things off from one yard out. Chicago turned it over on downs on their next possession, which resulted in a 13-yard hookup from Allen to Knox to seal the deal.