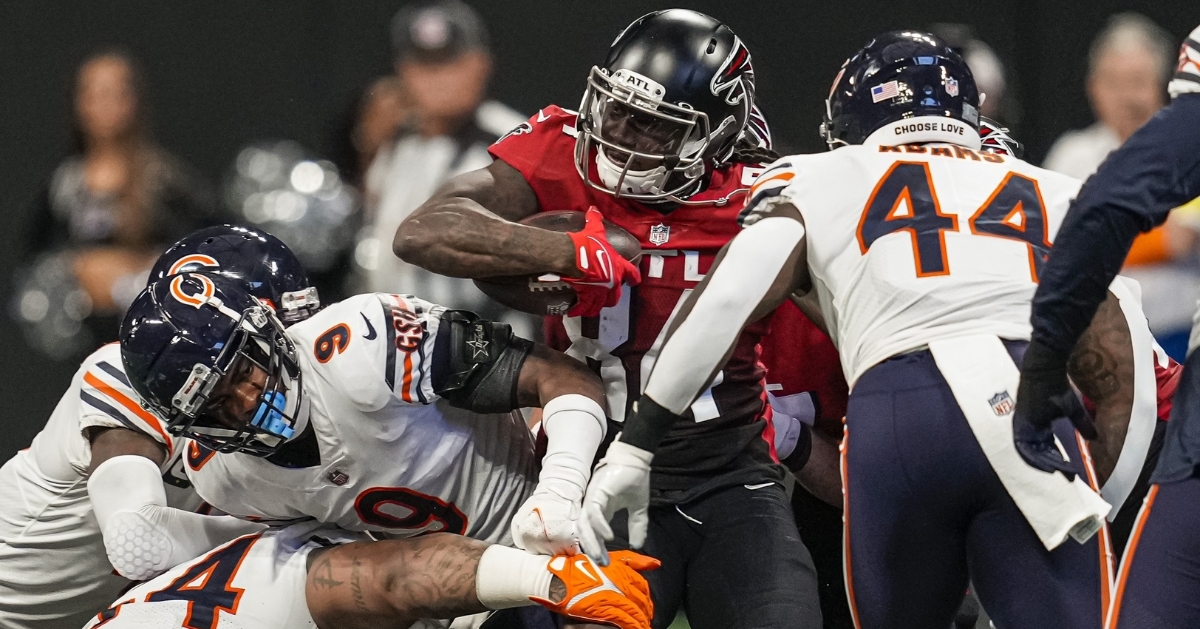 A week after dropping another high-scoring affair against Detroit, the Bears went toe-to-toe with one of the league’s most surprising offenses. The bears dropped a heartbreaking affair in Atlanta to the Falcons, 27-24.

So let’s take a look and give out some grades based on the performances by position after the loss to the Falcons.

Justin Fields has shown some extreme growth over the last couple of games, and that was apparent on Sunday. Fields was accurate, completing 14-of-21 passes for 153 yards and a touchdown through the air. Fields also ran for 85 yards and a touchdown last week. What knocks this game down to a B+ for the dynamic Fields was an interception thrown, although he did turn in his fifth straight multi-touchdown game.

Still a strong effort from QB1, but he did injure his shoulder late in the contest.

David Montgomery was okay on the ground, carrying the ball 17 times for 667 yards. He also caught three passes for 54 yards. Khalil Herbert was out with injury, so it was Trestan Ebner who spelled Montgomery with six carries for eight yards. However, Fields made up for what this group lacked on Sunday. The Bears will hope to keep the running game involved as the season continues, as they are the NFL’s No. 1 rush offense.

The Bears certainly have improved here but have much more work to do.

This unit certainly has talent with Cole Kmet and Ryan Griffin, but they have not been that active. Cole Kmet led the Bears with three catches for 35 yards, but he snapped his touchdown streak.

The offensive line was not that bad, but they did allow four sacks of quarterback Justin Fields. They need to do a better job of keeping Fields upright, but they made up for it in the run game, opening holes for Fields and Montgomery all game long.

The defensive line was not good. The D-line allowed big play after big play in the run game and did not muster up nearly enough pressure on Marcus Mariota.

Roquan Smith has been traded to Baltimore, Robert Quinn is now an Eagle, and this unit is depleted. They sure looked like it on Sunday. However, Jack Sanborn did come away with nine tackles to save this unit.

This unit was not great on Sunday. Eddie Jackson and Jaquan Brisker were active in the tackle department, but the Bears' secondary struggled to make any big stops or take the ball away.

Kicker Cairo Santos made three extra points and a field goal but missed a crucial field goal, and the Bears lost by three. Trenton Gill nailed one of his four punts inside the 20. Velus Jones had a 55-yard return, but the Bears also gave up a kick return to the house from former Bear Cordarelle Patterson.

The play calling was better in Matt Eberflus' 11th career game with the Bears. The Bears seemed to trust Justin Fields more, and it was nice to see him perform. We’ll see how the Bears respond in week 12.

Nonetheless, week 11 is in the books, and the Bears are 3-8. Next on the schedule is the New York Jets on Sunday.