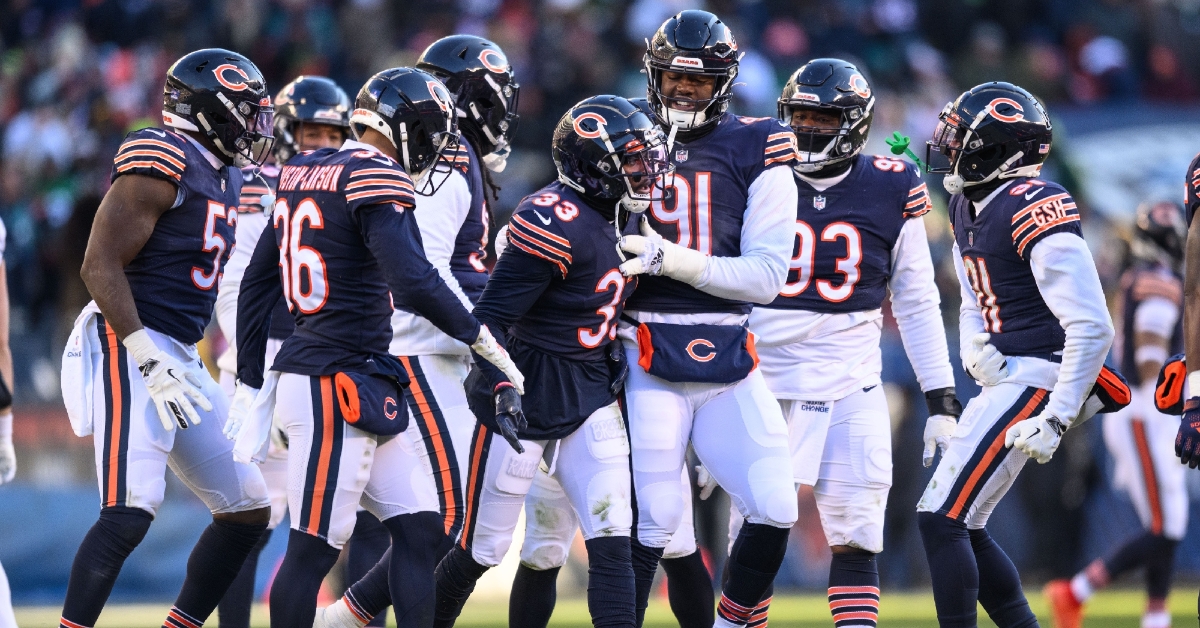 When the Bears took to the field on Sunday, most of them had them getting blown out. You can see most fans argument for that as Chicago was taking on the best team in the NFL in Philadelphia while the Bears continued to struggle.

That is why games are played and not decided by what is on paper. Chicago put forth one of their best efforts of the season and had the Eagles on the ropes for much of the game. They made the MVP front-runner in Jalen Hurts look human and kept him off his game for most of the first half and a good portion of the second half.

Despite that, the Eagles still found a way to win, which all good teams do, and Hurts came away with three touchdowns on the ground to lead the Eagles to the 25-20 win. It was the seventh straight loss for Chicago, who now moves into the No. 2 pick in the NFL draft.

Here are some takeaways from that game:

The defense finally shows up

After struggling for two straight months, the Bears defense deserves a ton of credit for their effort. Sure, giving up 25 points isn't great, but the Bears defense came to play after not showing up for a long time.

Not only did they intercept Hurts twice, but they also recovered a fumble to force three Philadelphia turnovers. That is something they haven't been able to do consistently enough during this losing streak. Had they been able to, you have to wonder if this team would have more than three wins.

In any instance, the type of performance the defense showed on Sunday is worth noting, as it is something to build upon going forward. Rookies Kyler Gordon and Jaquan Brisker had monster games, and they need to continue doing that for the defense to turn the corner.

Over the last few years, the Chicago Bears have made a point to improve a terrible offensive line. Drafting Teven Jenkins in the second round in 2021 was a huge step, but he has been inconsistent at best through two seasons. However, to his credit, he has worked extremely hard to improve, as has the entire offensive line.

During the first half on Sunday, Jenkins went down with an injury that looked serious. After watching the replay several times, you could see Jenkins injured his neck on the play, which was a significant cause for concern. After laying on the field for several minutes, a stretcher was called in to take Jenkins off the field, and he was taken to a local hospital for observations and testing.

That is never a good sign and is always something you worry about as an NFL player. Although no results have come back yet, it is safe to say that his season might be over, but the Bears are hoping that is it and that his career is not in jeopardy. In any case, you never want to see someone get hurt, and our thoughts and prayers go out to Jenkins and his family as we wish him a speedy recovery.

Say what you want about Justin Fields and his passing stats, but the man has had a fantastic second year. Sure, he needs to get more consistent in the passing game and turn the ball over less, but he has made huge improvements this season and will only continue to improve.

Ideally, you would like Fields to run less and pass more, but his legs are a huge part of his game as he continues to break records on the ground. With one record in hand after rushing for 568 yards over a five-game stretch to break Michael Vick's record, Fields was at it again on Sunday as he continues to rewrite the record books.

With his 95 yards, Fields joins elite company as he reached the 1000-yard mark on the ground. That is something a lot of QBs can't do, and when you reach that number, it is worth noting as Fields continues to lead the Bears in rushing this season. Fields also set another team record with his performance as he broke Bobby Douglass' single-season record for rushing yards by a QB that stood since 1972.

In a season that has been painful to watch, fans have been treated by the growth of Fields and the excitement he brings to the game. Hopefully, this is a sign of things to come for the young man and that more wins will follow next season and beyond.

#ICYMIM (In case you missed it Monday)—in which we point out something you may have missed amid all the chaos on Sunday!