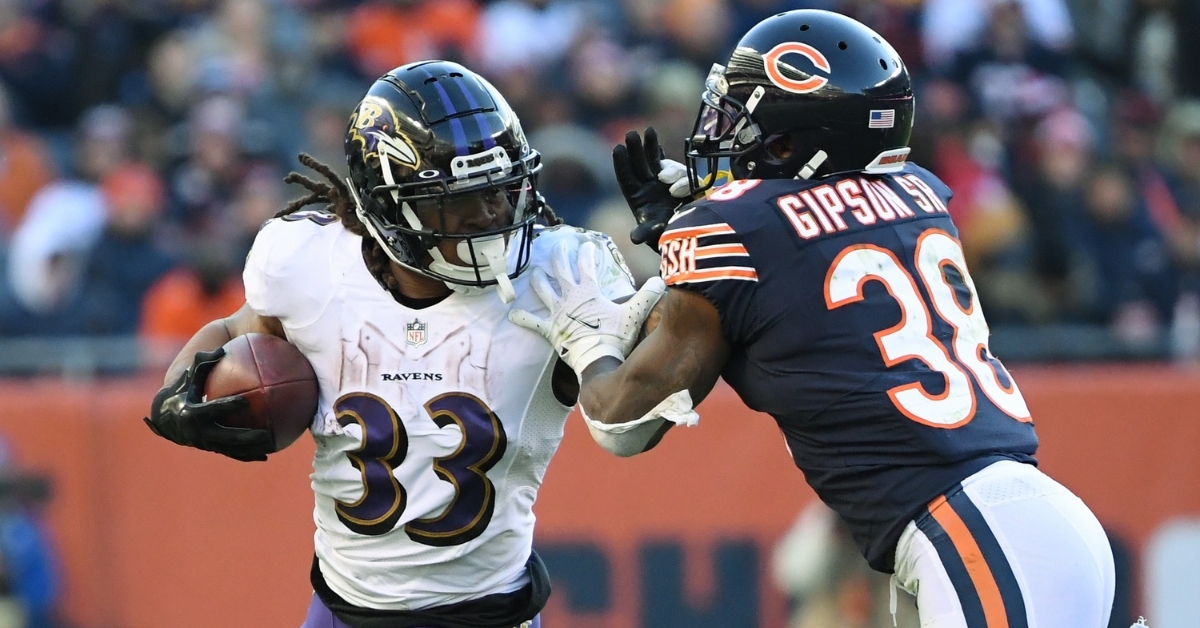 CHICAGO – The Bears had a golden opportunity to get back in the playoff hunt this week despite entering Sunday with a 3-6 mark. Not only did teams like the Carolina Panthers and New Orleans Saints lose, but the Bears had a chance to win not once, but twice this week as they took on the Ravens without Lamar Jackson on Sunday before heading to Detroit to take on the Lions for Thanksgiving.

Even with Jackson out of the lineup for the Ravens, the Baltimore defense kept them in the game, making things challenging for Chicago. Justin Fields struggled before leaving the game injured while Andy Dalton played well in relief of Fields. Dalton threw for 201 yards and a pair of scores in just one-half of football against the NFL's worst pass defense which begs the question as to what he could have done through four quarters.

Even with their struggles, the Bears still found a way to battle back and grab the lead late in the fourth quarter, only to see Tyler Huntley drive the field to set up the game-winning score with less than a minute to go. Needing a field goal to force OT, the Bears had a shot, but Dalton was under siege and took a sack to run out the clock and gave the Bears their fifth straight loss to drop them to 3-7.

Not only do the Bears have Detroit on the docket for Thursday, which is a winnable game, but without Jackson, this was a winnable game for the Bears. 3-6 is not where the Bears wanted to be, but had they won yesterday and then win again on Thursday, and you are looking at a 5-6 team as opposed to 4-7 or heaven forbid 3-8.

At 5-6, things are drastically different as both the Saints and Vikings sit at 5-5 and occupy the final two playoff spots. Carolina (5-6), San Francisco (5-5), Washington (4-6), and Philadelphia (5-6) are not only hovering around the .500 mark but are all in playoff contention. The Bears could have put themselves in that conversation, and with two games against Minnesota left this season, Chicago may have had the inside track.

Now, things are becoming bleaker with every passing week as wins are hard to come by. This was a missed opportunity for Chicago and one they may be kicking themselves at by season's end.

More than just a loss

A loss is never a good thing, especially for a reeling team, but this was more than just an ordinary loss. Sure, the Bears dropped their fifth straight game and fell further behind in the standings, but there was a bigger storyline to take away from the game, which surrounded rookie QB Fields.

Coming off his best game as a pro, Fields had two weeks to prepare for the Ravens, and their NFL worst pass defense. Many felt his game on Monday would be the turning point of his season as he grew up a lot in that game. Instead, Fields struggled mightily over two-plus quarters as he looked like the Fields of October, not the Fields of November.

To make matters worse, Fields was lost for the game in the third quarter, suffering a rib injury after getting tackled. Initial reports are promising as he has bruised ribs with no broken bones, but that still leaves his availability for Thursday in question.

The Bears need a win in the worst way on Thanksgiving, and the Lions are the only winless team remaining in the league. However, with the status of Fields in question, it may be Dalton getting the call on Thursday looking to put an end to the skid. No matter who starts, the game won't be easy as Detroit gets better each week, but falls short in the end.

There hasn't been much to cheer about offensively this season, but Darnell Mooney and David Montgomery are the rare bright spots. Mooney has emerged as Fields favorite target in the passing game, which is more evident with every passing game.

Outside of him, there hasn't been a single person in the passing game for Fields or Dalton to trust. Allen Robinson is going through his worst season as a pro, Cole Kmet has improved as the season has gone on, but the Bears have been looking for another significant threat to balance out the passing game.

Perhaps Goodwin can be that man as he broke out with his best showing of the season yesterday. After being signed as a free agent this offseason, Goodwin was viewed as a deep ball threat who can take the top off the defense. Not only has that not happened this season, but he hasn't been making plays consistently enough this season.

That all changed during the second half of the game yesterday as Dalton found him in stride for a go-ahead 49-yard score in the fourth quarter. That play alone reminded people why he was brought in, and it was the type of play the Bears have been waiting for from him. Goodwin hauled in 104 yards on the afternoon for his largest receiving total of the season. He needs to do this far more often to help balance out the lack of production from Robinson this season.