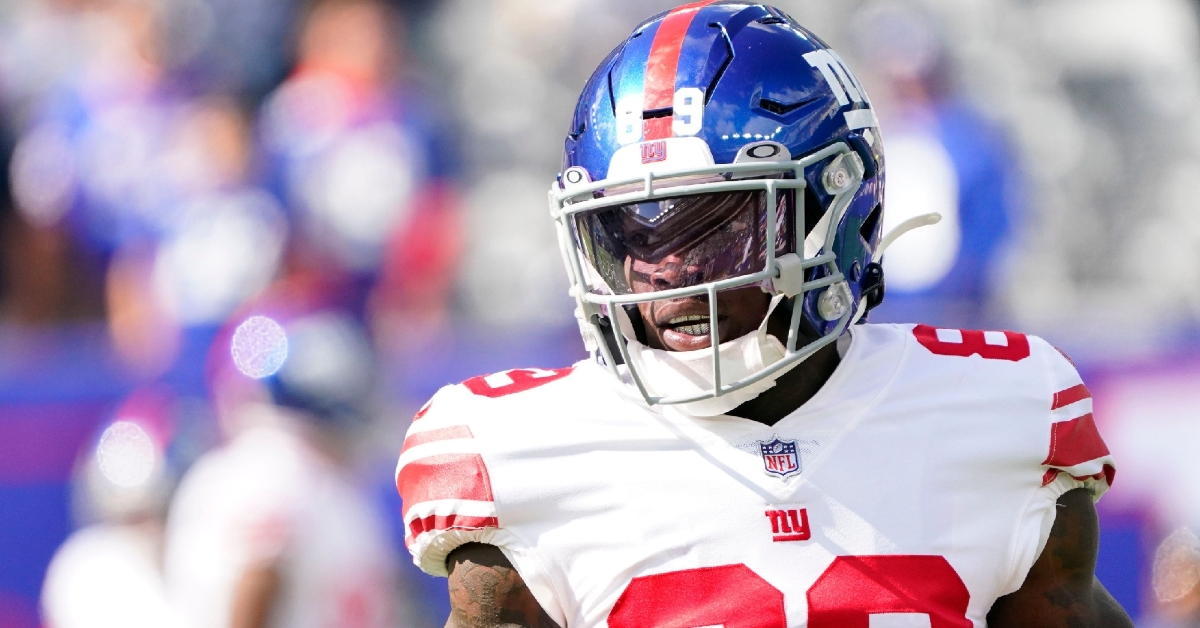 With the Bears looking to add playmakers around Justin Fields, and zero first-round picks, Ryan Poles needs to make sure he hits a home run in round two. Essentially, the Bears would love to find a way into the first round to draft one of the top receivers, but the reality is that it most likely won't happen.

However, if a first-round receiver is what they are looking for, they may not even have to go through the draft to get one. That is because the 2021 first-round pick and current New York Giants WR Kadarius Toney might be on the trade block. Of all the rumors we have heard this offseason, this has to be the strangest.

Moving on from a first-round receiver is becoming more frequent, but moving on from them after one year is unheard of. That doesn't mean the Giants will give him up, but the fact that he is on the block shows you that they are willing to listen to offers.

If the Bears are interested in making a move for Toney, it would be interesting to see what the Giants would want and what the Bears could essentially do to get this deal done. For those of you who don't remember, the Bears and Giants made a memorable draft-day trade last year, which is how Justin Fields landed in Chicago. Bears fans are thanking the Giants for that trade while the Giants may regret making the move.

Getting back to Toney, his name was rumored to be in play for Chicago last season as the Bears loved his makeup as a player. Despite having a less than appealing rookie season where he hauled in 39 catches for 420 yards and zero touchdowns, he did that in 10 games as he missed nearly half of the season.

Toney missed time with COVID, but he also dealt with a foot and hamstring injury during the season, which drastically hampered him all season. Add in him visibly voicing his frustrations early in the season and then getting ejected for throwing a punch, and his rookie season was one to forget.

Needless to say, you can see why the Giants want to move on from him, while a change of scenery could be what Toney needs. When you have a situation like this where Toney is a low-risk type of buy, you at least have to kick the tires on it. After all, he is still a young player with plenty of potential, so to think last season is who he is would be a stretch.

Toney was a top 10 prospect last season for a reason, and the Bears wanted him on their roster until they made the trade for Fields. Toney put himself on the map during his final year at Florida when he logged 1145 yards from scrimmage to go with 11 scores. 984 yards were on the receiving side of things, while he also added 161 on the ground.

Looking at his overall skill set, he reminds you of a poor man's version of Deebo Samuel as someone who can do it all on the field. Given that Luke Getsy is the new offensive coordinator and having spent time in Green Bay under Matt LaFleur, you have to think he would know how to maximize Toney's strengths as a player.

This is a situation worth monitoring for several reasons. First, are the Giants serious about making this move? Second, how serious were the Bears about him last season, and would that be enough to entertain the idea again. Third, what would need to be given up to get this deal done.

Let's say the deal is done, and the Bears pull the trigger and bring Toney in. You are then looking at an entirely different situation the rest of the draft where the Bears wouldn't have to focus on WR. They could then shift their focus to OL and other needs, as this move could essentially help the team in more ways than one.

If the Giants decide to trade him...

What is the best landing spot for Kadarius Toney? pic.twitter.com/W3K8qbRt6I