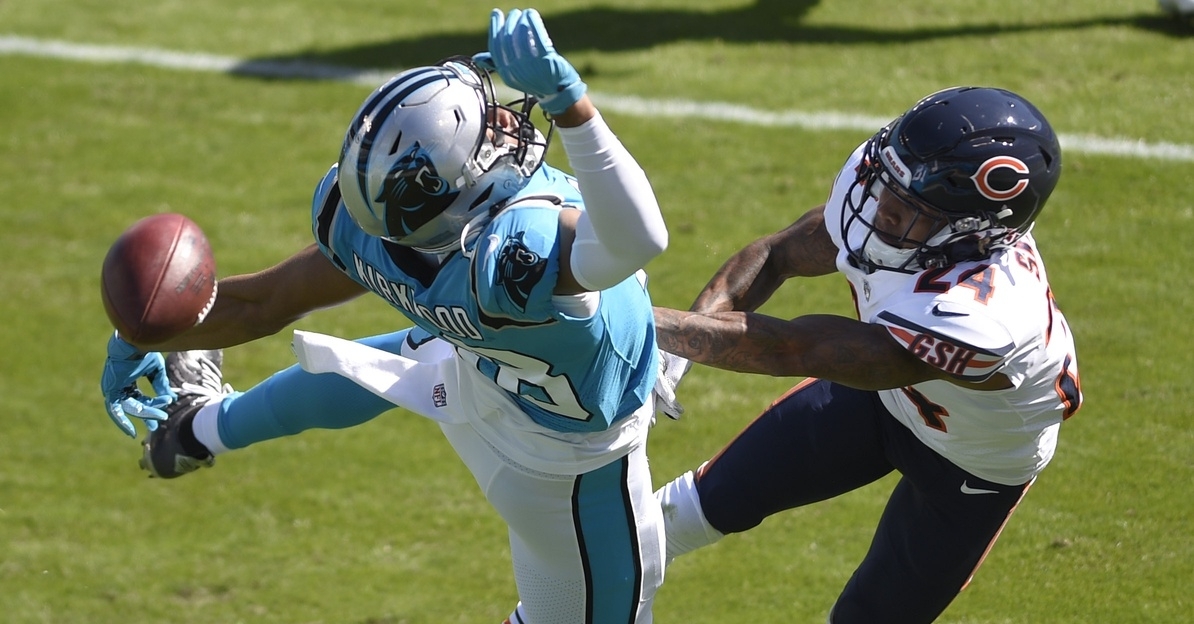 The Chicago defense forced three Carolina turnovers, and the Bears improved to 3-0 on the road. (Credit: Bob Donnan-USA TODAY Sports)

CHARLOTTE, N.C. — Defense wins championships, and that age-old maxim should have the Chicago Bears (5-1) feeling confident in their Super Bowl chances through Week 6 of the 2020 NFL season. Continuing to impress on defense, the Bears improved to 3-0 on the road and 3-0 against NFC South opponents via a 23-16 victory over the Carolina Panthers (3-3) on Sunday.

Forcing three turnovers, the Bears' defense dominated the Panthers' offense throughout, and an interception by DeAndre Houston-Carson sealed the win for Chicago at Bank of America Stadium. Nick Foles went 23-for-39 under center for the Bears, throwing for 198 yards, one touchdown and one interception. He also scored on a quarterback sneak for Chicago's first third-quarter scoring play of the season.

Panthers, interception: On just the third play from scrimmage, Teddy Bridgewater was picked off by Tashaun Gipson. The ball was knocked up into the air after Jaylon Johnson drilled Robbie Anderson while he was attempting to secure a catch. Bilal Nichols sacked Bridgewater on the previous play, and Bridgewater narrowly avoided being taken down in the end zone for a safety.

Bears, touchdown: Following some clock management issues that resulted in a timeout being used a delay of game being called, the Bears scored on a perfectly thrown pass from Foles. Rookie Cole Kmet scored his first touchdown as a Bear, coming down with the nine-yard pass in the end zone. Foles hurled the throw into a tight window, and Kmet was able to hang on.

Panthers, field goal: The Panthers marched to the Bears' 3-yard line but had to settle for a field goal. Bridgewater and D.J. Moore hooked up for multiple sizable gains on the possession, which ended with Joey Slye making a 21-yarder.

Bears, punt: Allen Robinson converted a short pass into a 17-yard gain, and Darnell Mooney amassed 11 yards after nabbing a short pass. However, the Bears were forced to punt.

Bears, field goal: David Montgomery scurried for 11 yards upon catching a screen pass and spinning out of a tackle. Kmet made his second reception of the day on an 11-yard pickup. The Bears stalled out in the red zone, and Cairo Santos kicked a 31-yard field goal.

Panthers, field goal: On first-and-15, Moore notched a 16-yard gain on a pass over the middle. Former Bear Mike Davis produced a couple of impressive carries on the drive. Unnecessary roughness was called on Kyle Fuller, who hit a defenseless receiver in the helmet with his shoulder, and a neutral zone infraction by Akiem Hicks on fourth-and-3 set up first-and-goal at the 3-yard line. The Bears came through with a goal line stand, and Slye kicked a 20-yarder.

Bears, field goal: Chicago wasted no time in advancing into Carolina territory. Montgomery moved the chains with a seven-yard reception, and Jimmy Graham then caught a 10-yard pass. Montgomery amassed 13 yards on a screen pass, but the Bears were unable to reach the red zone. Santos drilled a 55-yarder with two seconds remaining in the first half.

Panthers, end of half: A kickoff return ran out the clock.

Bears, punt: On the opening drive of the second half, pass interference being called on Brian Burns moved the Bears beyond midfield. Chicago was unable to do any damage in Carolina territory and had to punt after a Foles pass was broken up on a third-down play. The Panthers were pinned deep by the punt, beginning the drive at their own 3-yard line.

Panthers, fumble: A wild series of events unfolded, starting with Davis fumbling on a short run. Eddie Jackson knocked the football loose, and Hicks recovered it. Earlier in the possession, Anderson made a difficult catch in tight coverage for a 20-yard gain.

Bears, interception: After taking over at the Carolina 22, Foles attempted a risky pass under pressure, and it was picked off by Jeremy Chinn at the Panthers' 9-yard line.

Panthers, missed field goal: On the very next play following the interception, an interception, which would have served as the third turnover in three plays, was waved off due to pass interference. Jackson thought that he had a pick-six, but Fuller was flagged for pass interference. The Bears argued that the pass was tipped at the line, which would have nullified the pass interference call. The Panthers retained possession, though. Anderson pulled off a phenomenal diving catch near the sideline for a 39-yard gain. Bridgewater was sacked after tripping over an offensive lineman's leg, and Slye capped off the possession by sending a 54-yarder wide right.

Bears, touchdown: The Bears produced a 56-yard touchdown drive, which featured an 18-yard gain on a pass to Mooney that advanced the ball into the red zone. Montgomery barreled his way to the 1-yard line with an 11-yard carry and then had his one-yard touchdown run reversed. Foles broke the plane on a quarterback sneak thereafter, marking the first scoring play of the season for the Bears in the third quarter.

Panthers, touchdown: The Panthers responded with a touchdown drive of their own. The Bears were flagged multiple times on the possession, including two penalties for having 12 men on the field. Davis kept the drive alive with a three-yard rush on fourth-and-1, and pass interference was then called on Johnson in the end zone, as he appeared to lock up Moore's right arm. Davis capped off the drive with a one-yard touchdown carry.

Bears, field goal: Montgomery broke free for a 12-yard gain on the ground, and Foles found Robinson wide open over the middle for a pickup of 23 yards. Roughing the passer was called on the play, which moved the Bears into the red zone. The Bears failed to collect another yard on the possession, and Santos sent a 31-yarder through the uprights.

Panthers, field goal: Moore began the drive by racking up 38 yards on a great feed from Bridgewater. On third-and-10 at the Chicago 27, Bridgewater was sacked by Mario Edwards Jr., and Slye proceeded to sneak a 48-yarder inside the right upright, cutting the Panthers' deficit to seven.

Panthers, turnover on downs: Anderson collected a 13-yard reception, and Trenton Cannon bolted for 19 yards after securing a short pass. On third-and-13, with the ball placed just beyond midfield, Bridgewater scrambled for 11 yards. Out of the two-minute warning, the Panthers went for it on fourth-and-short, and Bridgewater's pass fell incomplete.

Bears, punt: Chicago did not eat up much of the clock on this possession. Foles rolled out and threw an incomplete pass on third-and-2, allowing the Panthers to keep their final timeout.

Panthers, interception: The Panthers took over at their own 20-yard line but immediately gave the football away, as Bridgewater was picked off on the drive's first play. Houston-Carson jumped in front of the pass over the middle and hauled it in for his first career interception.

First career INT for DeAndre Houston-Carson couldn't have come at a better time!

Bears, end of game: Foles kneeled three times en route to time expiring, with the Bears hanging on for yet another thrilling win. The Bears moved to 3-0 in away games for the first time since 2006, the most recent season in which Chicago reached the Super Bowl.

Up Next: In Week 7, the Bears will square off with the Los Angeles Rams (4-2) on Monday Night Football. The contest will kick off at 7:15 p.m. CDT on Monday, Oct. 26. The Rams will host the Bears at SoFi Stadium in Inglewood, Calif., as Chicago will play at the brand-new stadium for the first time. Expect a warm, sunny evening in Southern California.