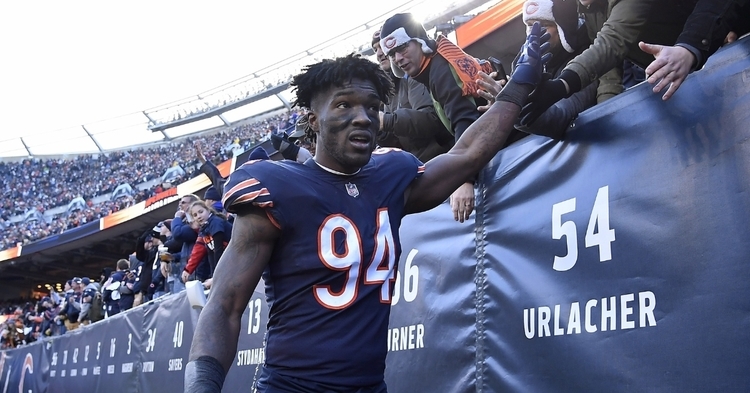 One of the busiest drafts in the last decade for the Bears was in 2016 with at least one pick in every round and three picks in the fourth as they walked away with nine total selections.

Round 1: Leonard Floyd (OLB/DE Georgia): In a trade with Tampa, the Bears moved into the top 10 in which they selected Floyd for defense. Known for his tenacity and relentlessness to the ball in college, Floyd showed flashes of that day one in Chicago, but for some reason couldn’t find the consistency he was hoping for.

In four seasons with the Bears, Floyd racked up 153 tackles, 18.5 sacks, one fumble recovery, one interception, and two defensive scores. While those are solid numbers, those are not the type of numbers you would expect from a top 10 player. After acquiring Robert Quinn this offseason, Floyd was expendable and was later non tendered a new deal. Floyd currently is on the Los Angeles Rams after signing a contract this offseason.

Round 2 Cody Whitehair (G Kansas State): Looking to shore up the offensive line, the Bears went guard in round two taking Whitehair from Kansas St. A center by trait, the Bears liked what they saw from him at the guard position and plugged him at G upon his arrival to Chicago. Even though Whitehair had some success at the guard position, he has always been a natural center, and by year two in the league, he was back at the center position where he remains.

About to embark on his fifth season in the league, Whitehair has been the one constant on the Bears line as he has not only played in all 64 games possible but started every game since being drafted. He is exactly the kind of player the Bears are hoping to build their line around as he has proven to be as durable as they come.

Round 3 Jonathan Bullard (DE Florida): Unlike the Bears' first two selections, Bullard hasn’t had as strong of a career but is still playing in the league today. In three seasons with Chicago, Bullard recorded 44 tackles and two sacks in mostly a reserve role but did have some starts sprinkled in.

After failing to make the Bears final roster cuts in 2019, Bullard signed with the Cardinals where he remains for the 2020 season. In nine games and six starts for Arizona Bullard recorded 22 tackles and 1.5 sacks, but was placed on injured reserve in early December due to a nagging hamstring injury.

Round 4 Nick Kwiatkowski (LB West Virginia): Taking with the first of the Bears three fourth-round picks, Kwiatkowski was signed as a depth piece for an improving defense but turned out to be so much more. Immediately following his arrival in Chicago, Kwiatkowski was producing exceptionally well to the point where he was ranked a top-five LB in 2017.

That type of production earned him a starting role in 2018, but after drafting Roquan Smith, his role as a starter was short-lived as he made a living as the primary second-tier linebacker on the team. It wasn't until this season when Kwiatkowski broke out filling in for several injured pieces and putting himself on the map as a solid player. His 184 tackles and six sacks in four seasons with the Bears drew some off-season attention as he signed a three-year 21-million-dollar deal with Las Vegas.

Round 4 Deon Bush (S Miami): Still looking to find the perfect running mate for Eddie Jackson, the Bears decided to take Bush in the fourth round hoping to mold him into that role. While his four seasons have been less than stellar thus far, Bush has a knack for being one of the better special teams’ players on the roster hence why he is entering his fifth season in Chicago.

As of today, Bush has recorded 43 tackles with a majority of those on special teams to go with one sack. This is a make or break year for him, in my opinion, as the Bears re-signed him for one season this offseason. With the departure of Ha-Ha Clinton Dix at the safety position, Bush may be called upon for a more prominent role this year.

Round 4 Deiondre Hall (CB Northern Iowa): The Bears are always looking for under the radar defensive signings and Hall was shaping up to be that in 2016. A stud at the FCS level for Northern Iowa, Hall never had the solid measurables needed to be a topflight corner in this league. Instead, Hall spent two years in Chicago dealing with an injury and early season suspension as he never mounted too much.

Before his release in 2018, Hall signed with Philadelphia, but once again failed to make the roster and was forced to not only sit out of football for 2018 but 2019 also. This season is a new year, and someone is again taking a shot on Hall as he has signed a one-year futures deal with Tampa Bay.

Hall registered 13 career tackles and one interception with Chicago.

Round 5 Jordan Howard (RB Indiana): One of the most underrated and perhaps biggest steals in the 2016 draft was Jordan Howard, who immediately blossomed into the Bears top back. His mix of speed and vision was exactly what the Bears needed as they were searching for a true running back for years. Howard immediately busted on the scene as a rookie rushing for a career-high 1313 yards and six touchdowns.

He followed up his rookie campaign with another 1000-yard season in year two, going for 1122 yards and a career-high nine scores. Since then, Howard has had a difficult time finding the same success as he has failed to crack 1000 yards the past two seasons. After rushing for 935 yards and nine more scores in his final season in Chicago, Howard was dealt to the Eagles where he finished with 525 yards and six scores while playing in just ten games.

Hoping for better luck in 2020, Howard has signed with the Miami Dolphins as not only will he be the teams' go-to back but is looking to get back to his pro-bowl level stats once again. Through four seasons, Howard has accumulated 3895 yards and 30 scores as he has proven to be a solid late-round steal.

Round 6 DeAndre Houston-Carson (S William & Mary): In terms of actual measurables, Houston-Carson had exactly what you were looking for in terms of a safety, but needed time to develop as a player. After signing a four-year deal with Chicago following the draft, he was waived the next offseason only to be added back to the practice squad and promoted to the active roster shortly after.

In his two years since Houston-Carson has continued to sign one-year deals to remain in Chicago while doing his best to perform at a respectable level. Thus far, he has totaled 28 career tackles and was re-signed by Chicago one again for 2020.

Round 7 Daniel Braverman (WR Western Michigan): When you get to the seventh round of the draft, you're not necessarily drafting for skill set as much as you are for depth. Braverman certainly fits that build especially coming off the season he had leading up to the draft. After hauling in just over 1000 yards in three seasons, Braverman busted out his senior season, picking up 1367 yards and 13 scores. Had it been against better competition, he goes higher but fell to the seventh round.

Unfortunately for him, he fell victim to the game of football as his NFL career was short and sweet. Not only was he released during roster cuts before being added to the practice squad, once he was added to the active roster, he saw action in just three games totaling maybe 15 total snaps. Since then, he has spent time on the Kansas City Chiefs, and Arizona Cardinals practice squads in 2017 and 2018, the San Antonio Commanders and Calgary Stampeders practice squads in 2019 before joining the St. Louis Battlehawks this year.

Draft Grade A-: It is hard to argue that this was one of the better drafts for Chicago over the past decade, even if most of these players are no longer on the roster. From a talent evaluation standpoint, Chicago certainly did their homework and found great talent up and down the board. While some like Whitehair worked out in their favor long term, others like Floyd, Howard, and Kwiatkowski helped pave the way for future deals that made the team better overall.