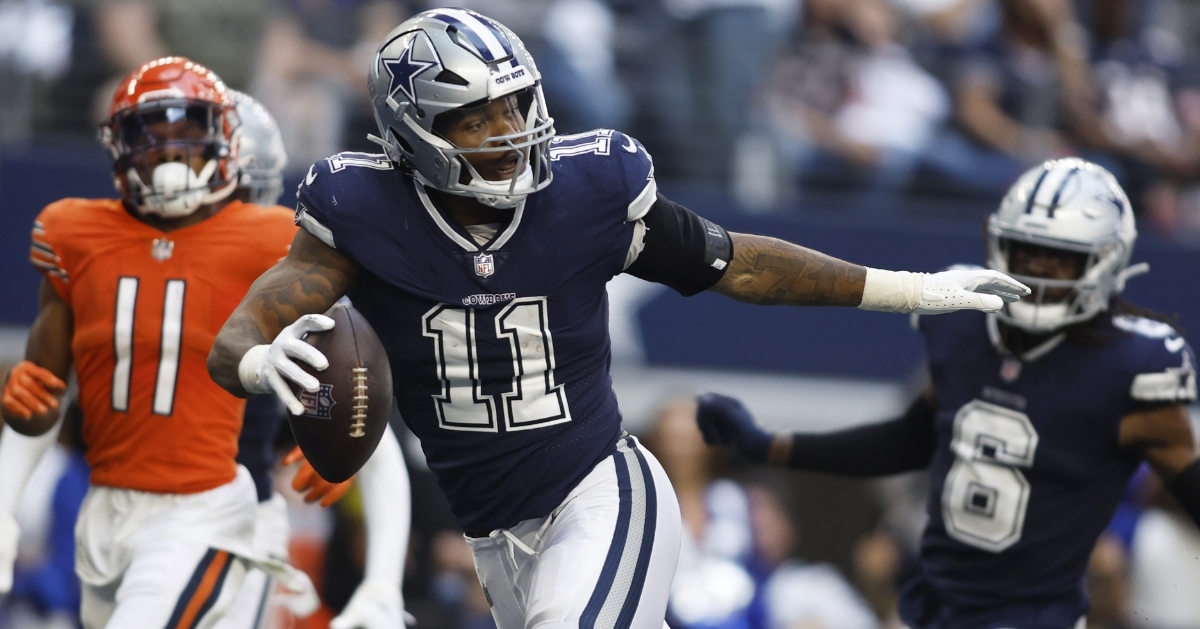 DALLAS - Perhaps the Chicago Bears (3-5) and their offense have found something. After six lackluster weeks of an offensive showing, Luke Getsy had the Bears clicking on all cylinders Monday night as they dropped a season-high 33 points against the New England Patriots in a win.

Six days later, the Bears' offense was at it again as they dropped 29 points and rushed for more than 200 yards for the third straight game. What made that stand out was the Bears put up those numbers against the Dallas Cowboys (6-2), who entered the game with a top-three defensive unit.

Despite the offense looking very good for a second straight week, it was the Bears' defense that let them down, as they allowed 14 points in each of the first three quarters before falling 49-29. At least the Bears can take away a moral victory knowing their offense appears to be playing at the level Getsy has been hoping for all season.

The big story of the game came from the Cowboys, where Ezekiel Elliott was ruled out prior to the game. That meant that Tony Pollard would be making his first start of the season. Pollard has been the perfect compliment to Elliott the last few seasons but on this day, no Elliott no problem. Pollard only carried the ball 14 times but came away with 130 yards and three scores as he torched the Bears' defense.

Pair that with Dak Prescott back in the lineup, and the Cowboys' offense was nearly at full strength and went right to work on the games opening possession. Pollard and Prescott shouldered the load on the game's opening drive and went 11 plays to take nearly five minutes off the clock. That resulted in a 7-0 Dallas lead as Prescott ran it in from seven yards out.

As if that wasn't bad enough, Chicago saw their offense go three and out on their first drive before punting the ball back to Dallas. Once again, it was the Cowboys' offense going to work, with Prescott finding Peyton Hendershot several times. Add in a big play to Michael Gallop and the Cowboys were inside the Bears' red zone, looking to strike again. CeeDee Lamb capped off that drive with a 21-yard TD reception and doubled the Cowboys lead 14-0.

It took a little bit for the Bears' offense to weather the storm, but they finally did that on their second possession needing 12 plays and nearly seven minutes to move the ball 75 yards. Velus Jones played a big role in that early on by using his speed to pick up an 18-yard rush before the legs of Justin Fields got going. Fields had several first-down runs with his legs and also the three-yard touchdown scamper that pulled the Bears within 14-7.

The problem was, the Bears' defense couldn't stop the Cowboys' offense as they continued to make quick work of them on the field. Dallas used 14 plays over their next two drives resulting in a touchdown from Pollard and Jake Ferguson as the Cowboys were on cruise control at this point, 28-7. Give the Bears some credit, as they not only battled back but started to make a game out of it.

For the second time in the half, Chicago used a lengthy drive to put points on the board as they went 12 plays for the second time. Khalil Herbert got the offense rolling as he led the team with 99 yards rushing before Fields started to make things happen in the passing game.

A costly pass interference call on Trevon Diggs aided the Bears to stay on the field a bit longer before N'Keal Harry hauled in his first TD as a Bear from 17 yards out. Following an Eddie Jackson interception on the next play, the Bears inched a bit closer with Cairo Santos booting home a 36 yarder to make things 28-17 at the half.

Chicago continued to battle back early in the third quarter as they used their second drive of the half to make things a one-possession game. What appeared to be a lost fumble from Herbert to open the drive, resulted in the Bears keeping the ball. Fields then went up top to Mooney for nearly 40 yards before finding him again for a short game. Herbert started the drive and then would finish it from 12 yards out as the Bears pulled within 28-23.

Unfortunately for Chicago, that would be as close as they would get as the defense continued to struggle. Immediately following that touchdown, Dallas got the ball back and saw Prescott hook up with Dalton Schultz for a monster gain. He would find Schultz once more before the running game took over with Pollard picking up his second score of the game.

Three plays later, Fields would find David Montgomery for a nice gain only to see the ball pop out. Micah Parsons pounced on the loose ball and raced 36 yards for the score, and just like that, it was a 42-23 lead. Despite the Bears letting the Cowboys stretch things out again, they continued to battle back and once again got things closer.

It may have taken 13 plays and nearly seven minutes off the clock, but the Bears took care of business once again. Fields played a massive role in that with his 41 yard scamper that moved the ball into Dallas territory. That play was nullified because of holding, but Jones made up for it with another first down run.

Another first-down hookup from Fields to Mooney had the ball back in Cowboys territory as they were looking to strike once more. It was at that point when the rushing duo of Herbert and Montgomery began to take over, which set things up for Fields from 10 yards out as he found Cole Kmet for the score.

Despite their best efforts to keep things close, Chicago would turn the ball over on downs on their next possession, with Pollard putting an exclamation point on things with a 54-yard run to give Dallas a 49-29 win.

Fields continues to improve as he completed 17 of his 23 passes for 151 yards and two scores. He also added 60 yards on the ground with an additional score. Herbert played a big part in the Bears 240 yard rushing attack, leading the way with 99 yards and a score, while Montgomery picked up 53 yards. Mooney brought in five passes for 70 yards.