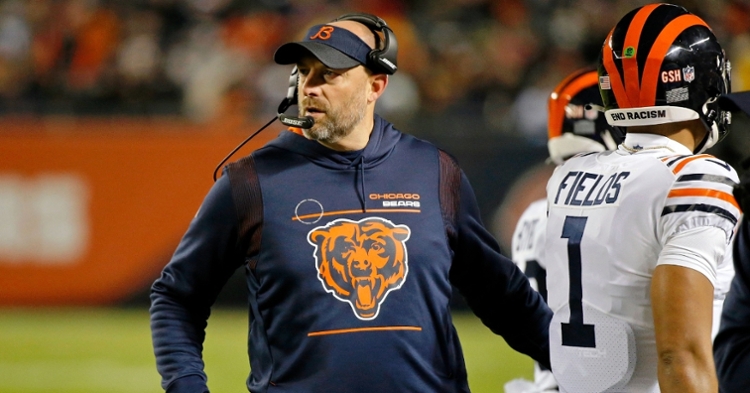 CHICAGO – You almost have to feel bad for this team at this point. Despite the Chicago Bears (4-10) best efforts on Monday night, they couldn't get out of their own way, and their miscues proved costly. Facing off with a Minnesota Vikings (7-7) team that still has playoff aspirations, you have to give the Bears a ton of credit, especially on the defensive side of the ball.

With so many critical pieces on defense out, including Jaylon Johnson and Eddie Jackson, no one would have been surprised if the Vikings rolled right over them, primarily through the air. Instead, Akiem Hicks and the Bears front four made life miserable for Kirk Cousins and the Vikings offense as they held him to a career-low 87 yards passing on just 12-24 passing. Dalvin Cook also struggled to get much of anything going, needing 28 carries to gain 89 yards.

The Vikings were held to just 193 yards of offense which was one of the best if not the best performance from the Bears defense. Typically when a team is held to under 200 yards, you have to like your chances, and from an offensive side of things, the Bears did well as they racked up nearly 300 yards on offense. Justin Fields had a solid game, going 26-39 for 285 yards and a score. However, costly fumbles and penalties were the Bears undoing as they fell in a rather dull game 17-9.

You could see the Vikings wanted to be more aggressive throughout the first quarter and test a secondary that hasn't played any snaps together. You say that when Cousins took a deep shot for Tyler Conklin on the first series only to have the ball hit his fingertips and fall incomplete. Looking to get back at it after the Bears punted, Cousins found his go-to man in Justin Jefferson for an 18-yard hookup and a first down.

A couple of nice runs from Cook had the Vikings offense in business before Cousins found Jefferson for the 12-yard touchdown to give Minnesota the 7-0 lead. This is where things began to change for the Bears and their offense, but not in a good way. After moving the ball well with David Montgomery and Jakeem Grant, Fields tried to make something happen with his legs only to have Cameron Dantzler knock the ball free, which Anthony Barr recovered.

Riding the legs of Cook once again, the Vikings put together an eight-play drive, but the Bears defense managed to hold tough, forcing a 37 yard Greg Joseph field goal to extend the lead 10-0. After driving down the field again, which was sparked by the 27-yard strike to Darnell Mooney, the Vikings defense was able to come away with another huge play forcing a fumble by Sheldon Richardson as he recovered the ball in the process.

Minnesota was unable to capitalize on their next possession and was forced to punt after three plays which led to a Cairo Santos field goal midway through the second to put the Bears on the board. It was time for the Vikings to get into the Christmas spirit on their next offensive possession as Cousins was looking for Jefferson only to have Deon Bush come down with the interception. It was Cousins sixth pick of the year, but third in the last two games. However, the Bears could not capitalize as Santos saw his 49-yard field goal attempt fall short, and the Vikings led 10-3 at the half.

Looking to build off how they finished the second half, Chicago did themselves no favors to start the third quarter. After putting it away on their first possession, the Bears appeared to have made a stop only to have a questionable personal foul call extend the drive. A 19-yard burst up the middle by rookie Kene Nwangwu had the ball inside Bears territory as the Vikings were on the move. Once again, the Bears defense appeared to make the stop, but another personal foul call extended the drive as the Bears handed the Vikings extra chances. Three plays later saw Cousins cap off a 12 play drive with Ihmir Smith-Marsette hauling in his first career NFL touchdown from seven yards out and extending the lead to 17-3.

The rest of the third quarter and second half, for that matter, was as dull as it could get as the two sides combined for four punts and a turnover on downs across their next five possessions and totaled 14 combined yards on those possessions. With the fourth quarter underway and in need of points, the Bears put together their best drive of the game, which was anchored by an up-tempo approach.

Fields was suddenly getting the ball out quickly and finding Damiere Byrd, who hauled in three catches for 36 yards on this drive. A 23-yard strike to Cole Kmet over the middle had the Bears offense in business as they were driving into Minnesota territory. With the ball at the 25-yard line, Fields took off for a six-yard gain only to take a shot from Eric Kendricks at the end. Because Fields went into his slide, Kendricks was not only given a personal foul call, but was ejected from the game, which was a massive blow for the Vikings.

Looking to capitalize on that penalty, the Bears faced a fourth and goal from the nine where Fields looked for Mooney in the endzone. Not only did he find his man, but Mooney made a tough catch only to come down just out of bounds as the Bears came away empty-handed yet again. That was the theme of the night for Chicago as their defense continued to force punts by Minnesota while their offense was unable to capitalize in the redzone.

With less than two minutes to go in the game, Fields and the offense came on the field needing to go 80 yards for a score. After Khalil Herbert got things going with a 16-yard reception, Fields went back his way for 10 more yards before finding Kmet for another 10-yard gain. It took nearly the whole game for Jimmy Graham to get involved as he hauled in his only catch of the game before Fields Byrd for 19, putting the ball inside the red zone yet again.

With one second to go on the clock, Fields wasn't about to go down without a fight as he fired a pass towards the endzone, where Jesper Horsted came down with the 19-yard touchdown reception as time expired, putting an end to the 17-9 Bears defeat. Not only did Fields have 285 yards passing, but he added 35 yards with his legs to give Montgomery, who led the team with 60 yards, a nice compliment. Kmet led the way with 71 yards receiving, while Mooney and Byrd chipped in with 63 and 62 yards in the loss.