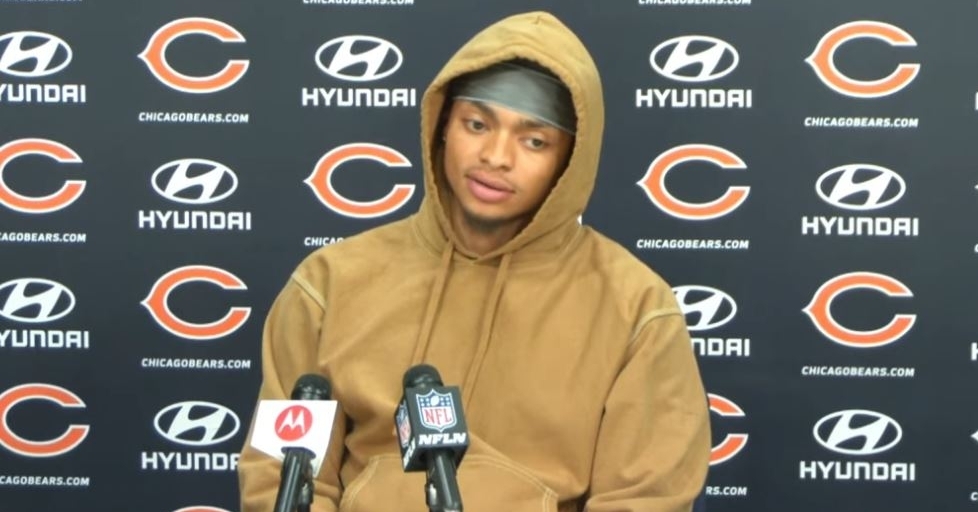 Fields talks to reporters during his press conference

Going into this coming Sunday’s game against the Green Bay Packers (12 p.m./FOX), this time playing them at home, Fields is still questionable. When asked about if he thinks he will be able to play, Fields gave a rather unclear response.

“I just want to make sure that I can do everything that I need to do to play the game,” Fields said.

The Bears did suffer some crucial injuries in their loss to the Jets, both on offense and defense. On defense, they put All-Pro safety Eddie Jackson on injured reserve (IR) after suffering a non-contact foot injury in the Jets game. He was leading the Bears in interceptions this season with four, as well as tackles with 80.

In addition to losing Jackson, Chicago also lost receiver Darnell Mooney for the rest of the season after he was placed on IR. He was leading the Bears in receiving yards with 493 yards and had an average of 41.1 receiving yards per game. This season was a down-season for Mooney, although he has also been Fields’ top-targeted receiver in Fields’ first two seasons. Being on the sidelines, Fields said he, and the whole team, were there for Mooney and Jackson.

“I think it’s just the whole team, staying together, playing for each other, being out there for each other, so just being the best leader I can be for our team, of course, being there for those guys (Mooney and Jackson) on and off the field.” Speaking about Mooney specifically, he said, “It was tough, just the kind of guy he is, what he brings not only as a player but as a leader. I think he’s in good spirits. This is another bump in the road that he’s had in his life and I expect him to make a full recovery and come back better. We’re behind him as a team, as a brotherhood, so he got his back.”

Being on the sideline, he was also learning from veteran-quarterback Trevor Siemian as much as he possibly could. However, he was still involved in the game reading defenses and helping Siemian whenever he could.

“I was trying to help him as much as I can just with guys, their defense signals, how they’re communicating, stuff like that,” Fields said. “I saw a lot of good stuff from him.”

Without his starting wide receiver, Fields is going to have to develop some stronger connections with some other receivers, perhaps the Bears’ newest receiver Chase Claypool. With the Bears, he only has seven receptions for 83 yards when he had 32 receptions for 311 yards in his first eight games of the season with the Pittsburgh Steelers. Fields explains that he is seeing it as an opportunity instead of a challenge to work and grow with new receivers.

“I’m excited to build that connection more with other receivers on the team,” Fields said. “I think it’s going to be fun finding out what guys can do.”

If Fields is able to play against the Packers, he will probably get a lot of rushing yards in. Not only is Philadelphia Eagles quarterback Jalen Hurts coming off of a game where he was able to rush for 157 yards against the Packers defense, but the Packers are the second-worst rushing defense in the NFL, allowing an average of 154.8 rushing yards per game. This should strongly play in the Bears’ favor, since they are still the best rushing offense in the NFL with an average of 192 rushing yards per game. However, the Bears were only able to muster up 127 rushing yards against the Jets with Siemian at quarterback; it should be noted though that the Jets ranked No. 10 in the NFL in rushing defense coming into that game. He is listed as being healthy and was a limited participant in practice on Thursday, so it seems very likely that Fields will play, even though it is not definite.