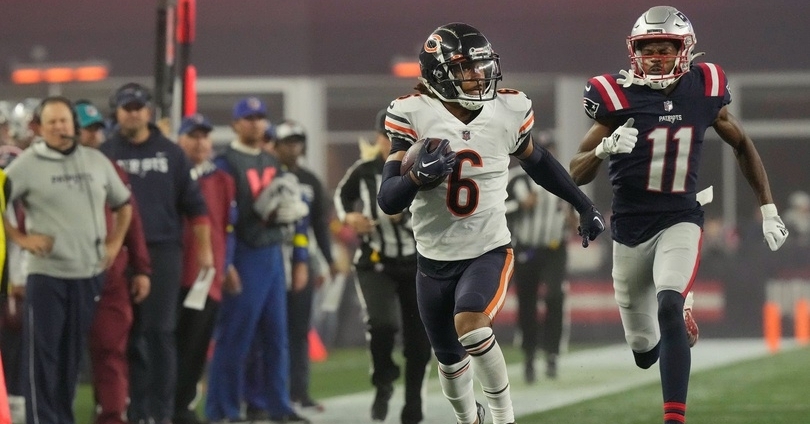 It’s very rare you see the Chicago Bears dominate in primetime, but that’s exactly what they did Monday Night against the Patriots. The Bears are now 3-4 after beating to the Patriots 33-14 in Foxboro.

So let’s take a look and give out some grades based on the performances by position after the win over New England.

Justin Fields has shown some signs of improvement of the last couple of games, and that showed on Monday night. Fields was not terribly accurate, completing 13-of-21 passes for 179 yards and a touchdown and interception on Monday. Fields ran 14 times for 82 yards and a touchdown. The Bears were brilliant on third down, and Fields made wise decisions with his arm and legs down the stretch. This may have been his best game as a pro.

David Montgomery was great on the ground, carrying the ball 15 times for 62 yards and a touchdown. Khalil Herbert spelled Montgomery with 12 carries for 62 yards, and he also caught a 25-yard touchdown. Trestan Ebner tallied eight yards on three carries as well. Bears will hope to keep the running game involved as the season continues.

This unit certainly has talent with Cole Kmet and Ryan Griffin, but they have not been that active. Cole Kmet led the Bears with two catches for 32 yards, and Griffin had one catch for five yards. That’s it from this unit.

The offensive line was not that bad, but they did allow four sacks of quarterback Justin Fields and allowed pressure on him all day. They need to do a better job of keeping Fields upright. They made up for it in the run game, opening holes for Montgomery and Herbert all game.

The defensive line was good. The D-line held New England to under 250 total yards, and big plays were hard to come by. While it would’ve been nice if they pressured New England a bit more, it was a nice outing.

Roquan Smith had 12 tackles and added a sack and an interception. He was everywhere for the Bears. Robert Quinn was far too quiet, but this unit was great.

Kicker Cairo Santos made three extra points and four field goals. Trenton Gill nailed one of his two punts inside the 20 — and Khalil Herbert and Dante Pettis were solid in the return game.

The playcalling was great in Matt Eberflus's seventh career game with the Bears. The Bears seemed to trust Justin Fields more, and it was nice to see him perform. We’ll see how the Bears respond in week 8.

Nonetheless, week 7 is in the books, and the Bears open the season 3-4. Next on the schedule is the Dallas Cowboys on Sunday.